Sporting KC signs 4 of its All-Stars to new deals 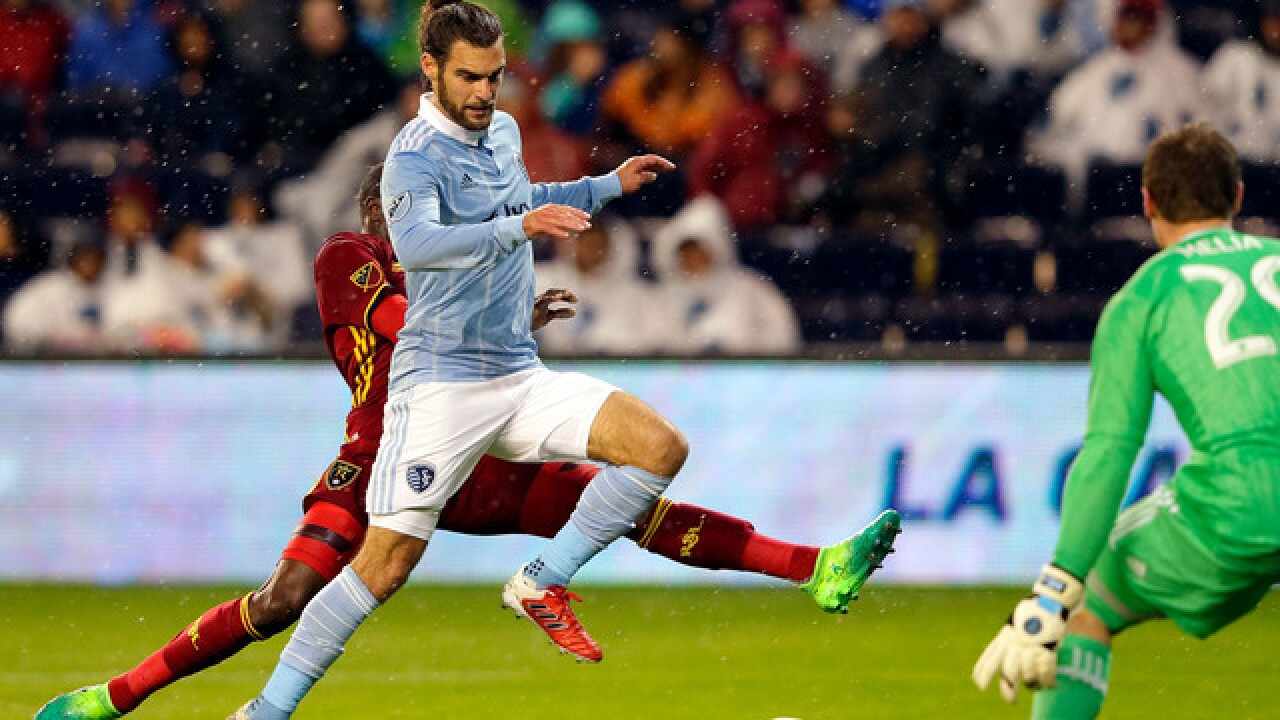 Image copyright 2017 Getty Images. All rights reserved. This material may not be published, broadcast, rewritten, or redistributed.
Jamie Squire
<p>KANSAS CITY, KS - APRIL 29: Graham Zusi #8 of Sporting Kansas City defends against a shot on goal by Demar Phillips #17 of Real Salt Lake as goalkeeper Tim Melia #29 looks on during the game at Children's Mercy Park on April 29, 2017 in Kansas City, Kansas. (Photo by Jamie Squire/Getty Images)</p>

KANSAS CITY, Kan. (AP) — Graham Zusi and Matt Besler were part of the same draft class, and Roger Espinoza and Ilie Sanchez came along later, and together the quartet has formed the foundation of Sporting Kansas City.

Now, the four All-Stars will be with the MLS club for at least a few more years.

Zusi, Besler, Espinoza and Sanchez all signed multi-year contract extensions Tuesday, an almost unheard-of move to stabilize a franchise in any sport. Terms were not disclosed, but all four said they were thrilled about the prospect of continuing with Sporting KC for years to come.

"I love playing with all my teammates, especially these guys," said Besler, who grew up in suburban Kansas City before starring at Notre Dame. "I really enjoy being on the field with them. And they push me every single day to make me a better player, so it's an honor to share the field with them and I'm looking forward to the future and getting to play many more games with these guys."

The 31-year-old Besler is already Sporting KC's career leader in appearances (293), starts (285) and minutes played across all competitions. He's also a five-time All-Star and helped the club hoist three U.S. Open Cup titles along with the MLS Cup championship in 2013.

Zusi has been there for all those titles, too.

The 32-year-old has moved from central midfielder to defender over the past decade, and that versatility has helped him become a fixture on the U.S. national team. Zusi is also a six-time All-Star whose 60 regular-season assists rank second in franchise history.

It was a similar affinity for Kansas City that lured Espinoza back for a second stint. He was chosen by Sporting KC in the 2008 draft and became an All-Star in 2012, and then signed with English club Wigan in the Premier League, where he helped beat Manchester City in the FA Cup final.

He returned to Sporting KC in 2015, and has started all 103 of his appearances the past four years.

The Honduran national has spent the past two years teaming with Sanchez in the midfield, after the Spaniard arrived early last year. Sanchez has started 68 of the club's 69 games across all competitions, and he was instrumental last fall in helping Sporting KC win another U.S. Open Cup title.

"The first thing to say right now is I'm not at their level, as a legend of this club," Sanchez said of his teammates. "Announcing we're going to be here for many more years makes me proud, and it makes me proud because I think this is the right place to be."

He's been the organization's technical director since 2006 and has managed all four of them starting with Besler and Zusi in 2009, the year he took over for the fired Curt Onalfo. It was ultimately Vermes, with the support of Sporting KC ownership, who decided to work out deals with all four players.

"These players have consistently performed at a high level and helped the club achieve tremendous success," he said in a statement. "Their winning mentality, work ethic, team-first attitude and all of the contributions they make outside of the soccer field in the community are integral to our strong culture, and we are excited to continue our pursuit of all of our goals with them in Kansas City."