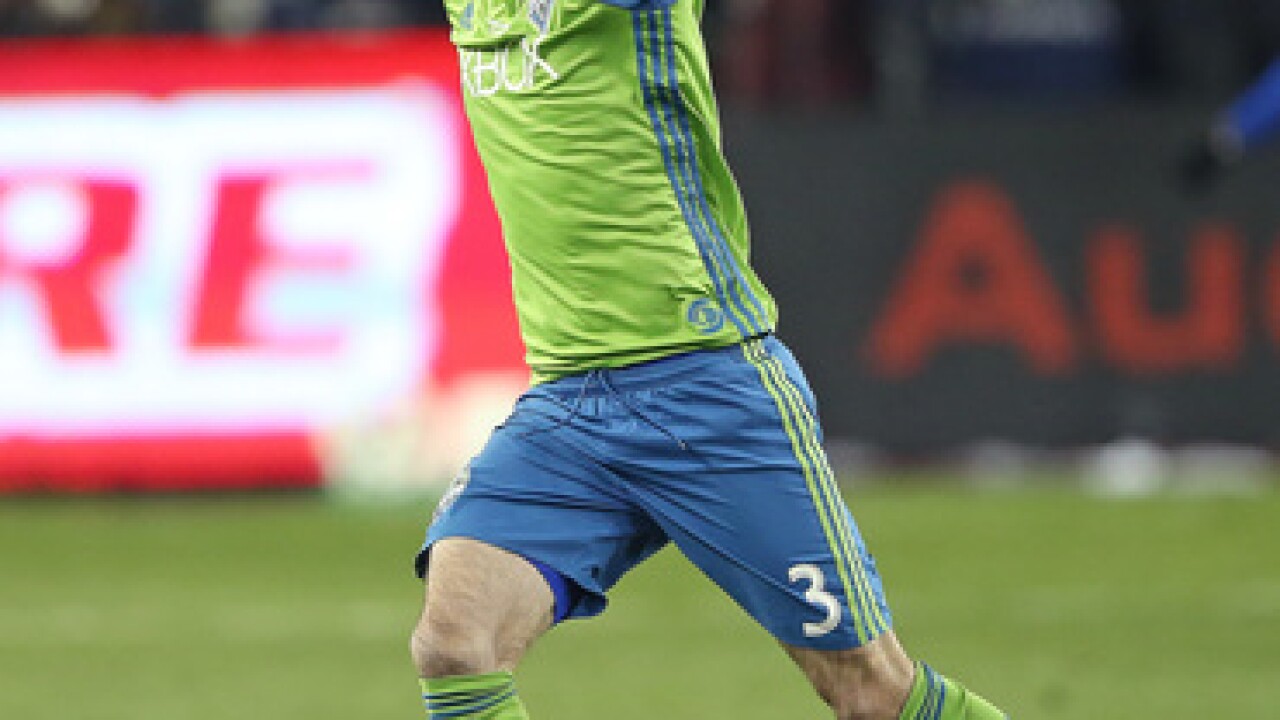 Copyright 2018 Scripps Media, Inc. All rights reserved. This material may not be published, broadcast, rewritten, or redistributed.
Claus Andersen
<p>TORONTO, ONTARIO - DECEMBER 10: Brad Evans #3 of the Seattle Sounders celebrates the championship win against the Toronto FC in the 2016 MLS Cup at BMO Field on December 10, 2016 in Toronto, Ontario, Canada. Seattle defeated Toronto in the 6th round of extra time penalty kicks. (Photo: Claus Andersen/Getty Images)</p>

Sporting Kansas City has signed free agent defender/midfielder and two-time MLS Cup champion Brad Evans, the club announced on Tuesday. Evans has been added to the Sporting KC roster, signing a one-year contract with an option for 2019.

Evans has amassed 28 goals and 31 assists in 255 MLS appearances (including playoffs) since beginning his professional career in 2007. The versatile veteran, who lifted his first MLS Cup in 2008 with Columbus Crew SC, arrives in Kansas City after spending each of the last nine seasons with Seattle Sounders FC, where he won four Lamar Hunt U.S. Open Cup championships and the 2016 MLS Cup.

"We are very fortunate to welcome Brad to our club," Sporting KC Manager Peter Vermes said. "With his mentality and work ethic, we know what he can bring to Sporting KC, and for us to add a player with such high character and experience is an incredible opportunity. We are excited for him to be a part of our locker room."

"I am thrilled for the opportunity to join Sporting Kansas City and help the club pursue championships," Evans said. "This is an exciting new chapter in my career and I can't wait to play in front of an amazing fan base at Children's Mercy Park. I would also like to thank the entire Seattle Sounders organization and their fans for all of their support over the last nine years."

Born and raised in Phoenix, Arizona, Evans has earned 27 appearances for the U.S. Men's National Team. He competed at the 2009 and 2015 CONCACAF Gold Cups and started five matches during the 2014 FIFA World Cup qualifying cycle, helping the United States advance to the flagship tournament in Brazil.

Evans joined Columbus Crew SC as the No. 15 overall pick in the 2007 MLS SuperDraft out of UC Irvine. In a breakout sophomore season, he scored six goals across 31 league appearances - including starts in all four playoff matches - and helped Columbus win the Supporters' Shield and MLS Cup double in the club's most successful season to date.

Seattle selected Evans in the 2009 MLS Expansion Draft ahead of their inaugural season, marking the start of his trophy-laden stint with Sounders FC. Serving primarily as a midfielder during the first half of his tenure in the Pacific Northwest, Evans won three consecutive U.S. Open Cups from 2009-2011 for a Sounders side that became a perennial MLS Cup contender in the Western Conference.

Evans tallied at least four goals and four assists each season from 2011-2013. He remained a pivotal contributor during a fruitful 2014 campaign as club captain, with Seattle capturing another U.S. Open Cup and winning its first Supporters' Shield behind 20 regular-season victories.

Operating as a full-time defender from 2015 onward, Evans again reached the MLS pinnacle in 2016. He made 28 league appearances, including five in the postseason, as the Sounders hoisted the 2016 MLS Cup with a penalty shootout triumph over Toronto FC. Evans buried his penalty in the shootout to claim his eighth major trophy since beginning his professional career almost a decade earlier.

Evans ended his stay in Seattle with 221 MLS games played - including 16 in the playoffs - while helping the club advance to the postseason every year from 2009-2017. In addition to winning four Open Cup titles with the Sounders, he featured in three separate editions of the CONCACAF Champions League, the premier international club tournament in North America.

On the international stage, Evans first represented the United States U-20s at the 2005 FIFA World Youth Championship under head coach Sigi Schmid. He made his senior debut in the 2009 CONCACAF Gold Cup and competed in nine friendlies over the next four years. During the 2014 FIFA World Cup Qualifying campaign, Evans started five matches - all victories - and scored his lone U.S. goal in second-half stoppage time of a dramatic 2-1 qualifying win against Jamaica in June 2013. He featured at his second Gold Cup in 2015 and last appeared for the U.S. MNT in February 2017.

Evans played four years of college soccer at UC Irvine from 2003-2006, scoring a school-record 31 goals in 75 games. He was named the Big West Conference Offensive Player of the Year in 2005 and 2006, landing All-American honors as a senior.