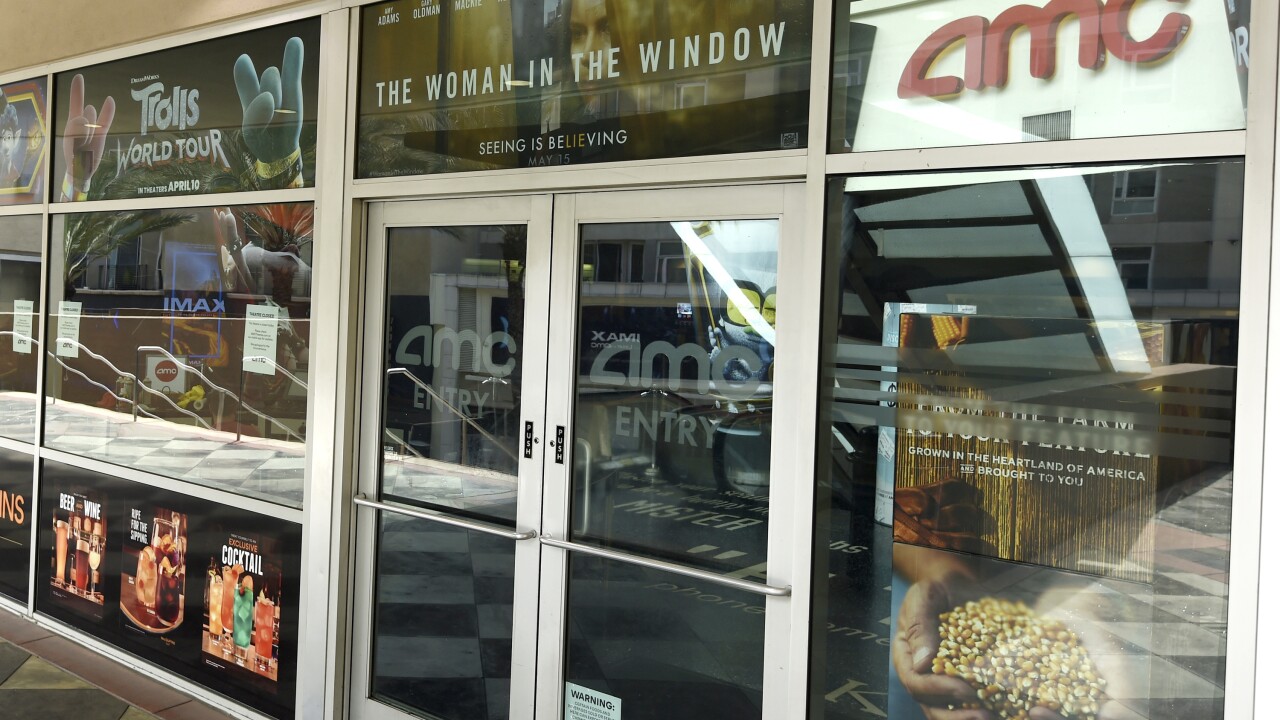 2020 Invision
Chris Pizzello/Chris Pizzello/Invision/AP
FILE - The front entrance to the currently closed AMC Burbank 16 movie theaters complex is pictured on April 29, 2020, in Burbank, Calif. AMC Theatres and Universal Studios on Tuesday announced an agreement for a shortened theatrical window, with the studio's films playing for a minimum of just 17 days in cinemas. The agreement repaired a rift between AMC and Universal brought on by the on-demand release of "Trolls World Tour" in April. (AP Photo/Chris Pizzello, File)

NEW YORK (AP) — In a sign of how the pandemic is remaking Hollywood traditions, AMC Theatres and Universal Studios on Tuesday announced an agreement for a shortened theatrical window, with the studio’s films playing for a minimum of just 17 days in cinemas compared to the typical 90 days.

Studios have increasingly sought to shorten that window and deliver new movies more quickly into the home.

After 17 days, Universal Pictures and Focus Features will have the option to make their films available across premium video on demand platforms, including Netflix, Amazon Prime and AMC Theatres On Demand.

“The theatrical experience continues to be the cornerstone of our business. The partnership we’ve forged with AMC is driven by our collective desire to ensure a thriving future for the film distribution ecosystem and to meet consumer demand with flexibility and optionality,” said Donna Langley, Chairman of Universal Filmed Entertainment Group in a press release.

This deal applies to U.S. theaters, international distribution between the two companies is still being negotiated.

AMC and other theater chains have struggled during the pandemic as businesses closed earlier this year and indoor spaces face state-by-state guidance on social distancing and reopening policies.

AMC says this multi-year deal with Universal is a commitment and belief that customers will come back.

“We would note that just as restaurants have thrived even though every home has a kitchen, AMC is highly confident that moviegoers will come to our theatres in huge numbers in a post-pandemic world. As people enjoy getting out of their homes, we believe the mystical escape and magical communal experience offered at our theatres will always be a compelling draw," said AMC CEO Adam Aron in a statement.

Universal said they are working with AMC and other distribution partners on restarting theatrical releases, including upcoming installments of Fast & Furious, Jurassic World, Despicable Me, and others.

Tuesday's agreement repairs a rift between AMC and Universal brought on by the on-demand release of “Trolls World Tour” in April. The new deal covers Universal films in the U.S. over the next three years.