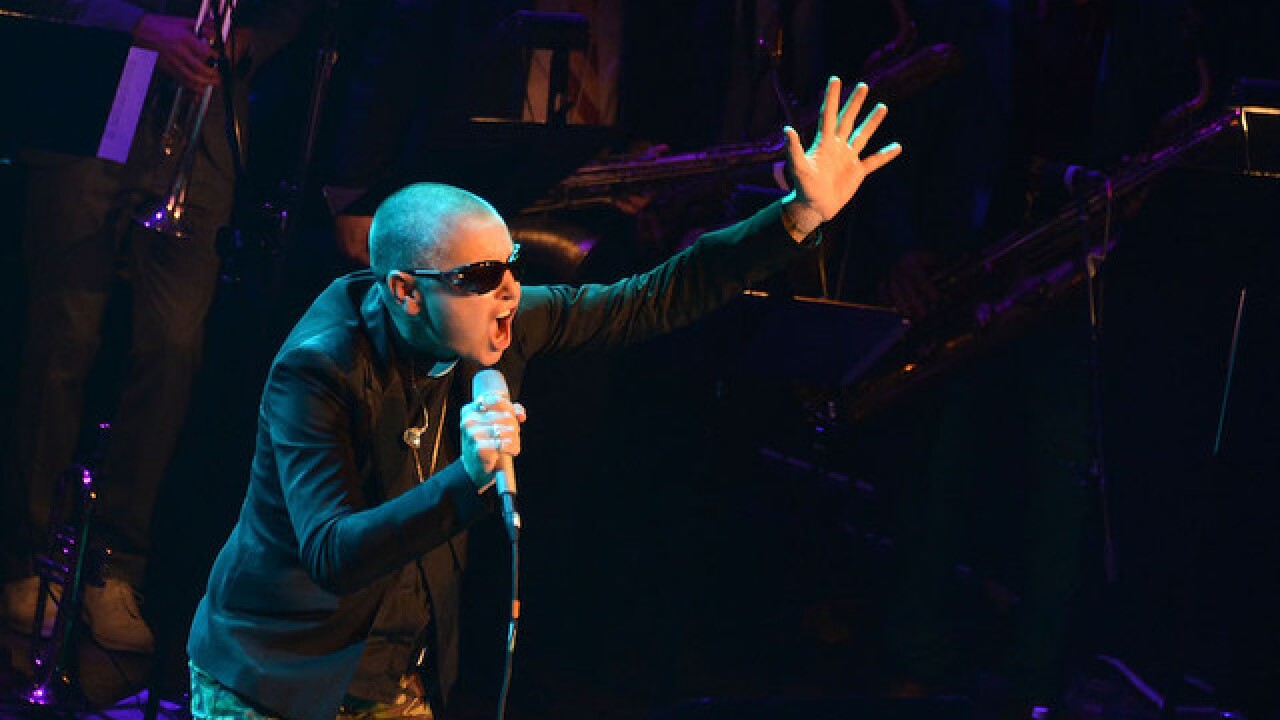 By: The Associated Press
Posted at 11:32 AM, May 16, 2016
CHICAGO (AP) — Police in suburban Chicago said Irish singer-songwriter Sinead O'Connor was found safe Monday after officers received a report that she never returned from a Sunday bike ride in the area.
Wilmette police spokesman Eric Peterson said O'Connor had been located, "is safe and no longer considered a missing or endangered person," though he wouldn't say where she was found or release details about her condition.
Local police issued a well-being check for O'Connor earlier Monday, saying someone called to report that she hadn't been seen since leaving for a bicycle ride early Sunday morning. It's unclear why O'Connor was in Wilmette, an upper-class suburb about 15 miles north of Chicago along Lake Michigan.
O'Connor, who has performed at least twice in Chicago this year, scored an international hit in 1990 with her rendition of Prince's ballad "Nothing Compares 2 U." The gifted but troubled singer-songwriter is known as much for her fierce and expressive voice as her shaved head and blunt criticism of the Catholic Church and other institutions.
Police said she reportedly left for her bike ride at 6 a.m. Sunday. About two hours later, a rambling message was posted on her official Facebook page that cited an upcoming court hearing and a child custody dispute. On Friday, a long message posted as an "open letter to my son Shane" encouraged the 12-year-old to bring his own case against Tusla, a child welfare agency in Ireland.
Paradigm Talent Agency, which represents O'Connor, declined comment when reached by The Associated Press earlier Monday. Her publicist didn't return a message.
O'Connor was sued this month by comedian Arsenio Hall over a Facebook post that stated investigators looking into the supplier of drugs used by Prince should question Hall. She also accused him of drugging her. The lawsuit seeks $5 million.
And in November, she posted a message on Facebook saying she had taken an overdose at a hotel somewhere in Ireland. Irish police later said she had been found safe. The next month, O'Connor posted on Facebook that she had been detained in a hospital for mental health evaluation.
Her rendition of "Nothing Compares 2 U" topped charts from Europe to Australia, and earned O'Connor multiple Grammy Award nominations. In 1991, O'Connor was named Artist of the Year by Rolling Stone.
But her blunt-spoken manner often drew criticism, especially in the United States. In 1990, some U.S radio stations refused to play her music after she banned the "Star-Spangled Banner" from her show in New Jersey. She drew intense criticism in 1992 when she ripped up a picture of Pope John Paul II on "Saturday Night Live."
O'Connor, who was diagnosed with bipolar disorder more than a decade ago, has spoken of her mental health problems. She told Oprah Winfrey in 2007 that before her diagnosis she had struggled with thoughts of suicide and overwhelming fear. She said at the time that medication had helped her find more balance, but "it's a work in progress."
In 2012, O'Connor canceled a planned tour, saying she her doctor had told her to rest after a "very serious breakdown."
Over the years, O'Connor has voiced support for other young female performers facing intense public scrutiny, including Britney Spears and Miley Cyrus. O'Connor — who has been married four times and has four children — signed a deal in 2014 to write a memoir.
Data curated by
Associated Press 2016