Royal Wedding 2018: What we know about the dress, entertainment, guest list and more 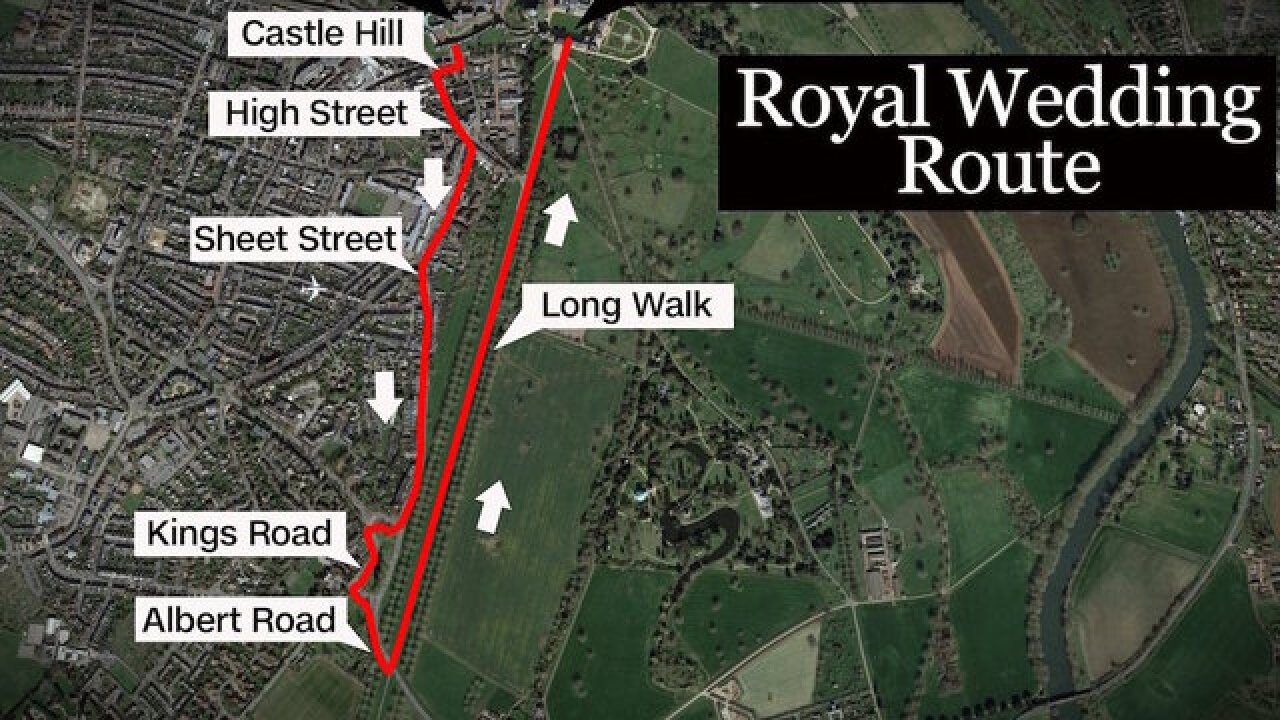 © 2018 Cable News Network, Inc.
CNN
<p>The couple and guests will then attend a reception hosted by Queen Elizabeth II at St. George's Hall in the castle grounds, prior to a smaller evening reception for around 200 friends and family hosted by Prince Charles, Harry's father.</p>

Britain's Prince Harry and Meghan Markle announced their engagement in November last year, sparking months of speculation about the details of their upcoming wedding.

Rumors about the dress, the performers and the all-important guest list continue to swirl. Here's what we know so far and what's still under wraps.

Prince Harry and Meghan Markle will marry on Saturday, May 19, in St. George's Chapel in the grounds of Windsor Castle, about 20 miles (32 kilometers) west of central London.

Windsor is the oldest and largest inhabited castle in the world and an official residence of Queen Elizabeth II, who spends most of her weekends there.

The chapel has a capacity of around 800.

London florist Philippa Craddock has been tasked with decorating the chapel. Her team plans to use white garden roses, peonies and foxgloves, as well as branches of beech, birch and hornbeam for the floral displays, which will be distributed to local charities after the wedding.

Many of the plants will be sourced from the gardens and parkland of the royally owned Crown Estate and Windsor Great Park, according to Kensington Palace.

The couple will exchange vows at noon (7 a.m. EDT).

At 1 p.m. (8 a.m. EDT), the newlyweds will leave Windsor Castle in a carriage for a roughly two-mile procession, traveling along the High Street through the town of Windsor, before returning to the castle by the Long Walk, according to the Palace.

The couple and guests will then attend a reception hosted by Queen Elizabeth II at St. George's Hall in the castle grounds, prior to a smaller evening reception for around 200 friends and family hosted by Prince Charles, Harry's father.

The Dean of Windsor, the Rt. Rev. David Conner, and the Archbishop of Canterbury, Justin Welby, the leader of the Church of England, will officiate the ceremony.

Markle is now a fully fledged member of the Church of England after she was reportedly baptized and confirmed by Welby in a secret ceremony in March.

The couple have taken a very hands-on approach in planning their big day, right down to their selection of music for the service, which will include several popular hymns and choral works. The chapel's director of music, James Vivian, will conduct the Choir of St. George's Chapel -- which was founded in 1348 and includes music from all ages in its repertoire.

State Trumpeters and an orchestra encompassing musicians from the BBC National Orchestra of Wales, the English Chamber Orchestra and the Philharmonia Orchestra will also provide music at the service.

The royal pair have also chosen to inject several more modern musicians and soloists into their ceremony. Karen Gibson and the Kingdom Choir -- considered one of the top ensembles in the country -- have been tapped to perform as has 19-year-old cellist Sheku Kanneh-Mason, who was the first black musician to win the BBC Young Musician of the Year award in 2016.

"I was bowled over when Ms. Markle called me to ask if I would play during the ceremony, and of course I immediately said yes," Kanneh-Mason said on Twitter. "What a privilege to be able to play the cello at such a wonderful event. I can't wait!"

It's been widely assumed Prince William will step into the role of best man. But in January, the Duke of Cambridge spoke of the upcoming nuptials and joked that his brother had not asked him yet.

More than 250 members of the British Armed Forces will also be involved on the day, an acknowledgment of Harry's time in the army. Personnel from a number of units including the Royal Marines and the Windsor Castle Guard will line the local streets, with music provided by the Band of the Irish Guards.

Details about who will be attending the ceremony (and the two receptions) are still very sparse; in fact, we know more about who won't be there. Kensington Palace has announced that the royal couple are not inviting political leaders, at least not on the basis of their official positions.

Some political figures may be present if they are personal friends of Harry and Meghan — but that won't include Barack and Michelle Obama, according to a royal source. The source would not say however whether the Obamas had been invited.

The White House and Downing Street confirmed that neither US President Donald Trump nor UK Prime Minister Theresa May had received invitations.

The invitations were made by Barnard & Westwood, a London printer and bookbinder that has been making invitations for the royal family since the 1980s, according to Kensington Palace.

Aside from the 800 (or so) guests lucky enough to be inside the chapel, more than 2,640 people are being invited inside the grounds of Windsor Castle on the big day.

The invitees — including 100 local schoolchildren and 610 Windsor Castle community members -- will be able to watch the arrivals of the bride and groom and their guests and to watch the newlyweds depart the castle on their carriage procession.

Visitors to Windsor on the big day are being encouraged to gather on the Long Walk -- the final stretch of the procession route -- where big screens and food stalls will be available.

Crowds will also gather along the rest of the procession route through the town, which will be decorated with bunting and ceremonial banners, according to a statement from the borough of Windsor and Maidenhead. Local groups will provide live entertainment throughout the town center.

Rail operators will put on extra train services to and from Windsor, and for those traveling by road, 6,000 car parking spaces will be available close to the Long Walk, according to the borough.

Thames Valley Police, the force that operates in the borough of Windsor and Maidenhead, has overall command of the policing for the wedding and is supported by partner agencies including the Metropolitan Police and the British Transport Police, according to a spokesman for Thames Valley Police. The operation is one of the largest ever undertaken by the force.

According to a police statement, security in the area has already been stepped up, with armed and unarmed officers as well as search dogs and mounted police patrolling the streets of Windsor in the weeks leading up to May 19.

Police have warned that people traveling to the area by car on the day may be stopped by police, while British Transport Police will be patrolling train stations and carriages. Anyone arriving in Windsor by train will be screened and searched.

There are no details yet on the cost of security for the wedding or the number of officers involved.

Renowned fashion and portrait photographer Alexi Lubomirski will take the official photographs of the newlyweds at Windsor Castle after the ceremony.

The two are already familiar with Lubomirski, who photographed Harry and Meghan at Frogmore House, Windsor, in the weeks after they announced their engagement.

We're unlikely to know anything about Markle's wedding dress until the bride steps out on May 19. But that hasn't stopped the rumor mill.

Designers tipped to be among the likely candidates include the Canadian-born Erdem Moralioglu, French designer Roland Mouret and the Ralph & Russo duo, who designed the gown Markle wore in her engagement photographs.

WILL MARKLE SPARKLE?: What will #MeghanMarkle be wearing as she walks down the aisle? pic.twitter.com/XhuzS05qE8

The couple have asked for anyone wishing to send them a wedding gift to consider donating to one of several selected charities instead.

The seven organizations chosen by Prince Harry and Markle all work on issues the couple are passionate about, including women's empowerment, HIV, homelessness and the environment, according to a Palace statement .

Guests will enjoy a n on-traditional wedding cake made by pastry chef Claire Ptak. The lemon elderflower cake will feature buttercream and fresh flowers as decoration.

Ptak, who was raised in California and now owns London-based bakery Violet Cakes, was previously acquainted with Markle, who had featured the chef on her former lifestyle blog.

Further details of the food and drink being offered have not been released.

Despite rumors that the Spice Girls, Elton John, Ed Sheeran or Sam Smith could be performing at the second, evening reception, nothing has yet been confirmed by Kensington Palace.

While the wedding itself will be a public affair, the choice of honeymoon destination is a closely-guarded secret.

There's already a long list of locations being suggested as possible destinations, including Botswana (where the pair vacationed early in their relationship) and the Seychelles (where William and Catherine spent their first days as a newly-married couple).