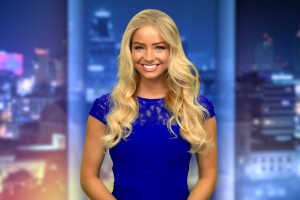 Hayley Lewis joined the 41 Action News sports team in 2019. She moved back to her hometown of Kansas City from Eugene, Oregon where she was a sports reporter and anchor for ABC KEZI 9.

Before moving across the country to Oregon, she reported for WKRN News 2 in Nashville where she attended Belmont University. As an intern she covered sporting events for Belmont, Vanderbilt University and Middle Tennessee. In addition to WKRN, she also reported for Belmont Athletics and the Ohio Valley Conference, covering games all across the conference. She also reported on ESPNU, ABC, radio sports shows, and covered the TSSAA State Championship tournament, the OVC tournament, and the NCAA Tournament Selection Show.

Although she spent her colligate time in Tennessee, Hayley was born and raised right here in Kansas City. She grew up as a head football coach’s daughter with a brother in DI football, so conversing about sports was second nature. Hayley spent most of her life moving from town to town in the KC Metro area, following her dad’s career and learning the ins-and‐outs of the business along the way. Her career choice not only connects with her upbringing, but allows Hayley to showcase an industry that is a part of her core. Seeing athletics from a coach’s perspective, a player’s, and a fan’s gives Hayley a well‐rounded approach to her delivery.

Hayley's life has always been centered in sports, but her sports broadcasting career truly began back in 2014, when she won the Miss Tennessee title. While she was attending college in Nashville, Hayley competed for Miss America and placed in the top ten out of 53 competitors. As Miss Tennessee, she served as the governor’s Official Spokesperson for Character Education, traveling over 80,000 miles and speaking to over 50,000 school children about character and respect. Her tenure as Miss Tennessee included numerous spokesperson roles and TV appearances, which perfectly prepared Hayley for her career today.

Upon her return to Belmont for her senior year, she quickly paired her sports knowledge with her new found on camera skills and took off in her career as a sports reporter/anchor. Hayley is passionate about sports broadcasting as it not only allows her a way to speak about one of her favorite interests, it allows her to captivate an audience with her positive energy. Hayley knows the world of sports is so much more than highlights. She says sharing the amazing things the world of sports can do for someone’s life is the most rewarding thing.