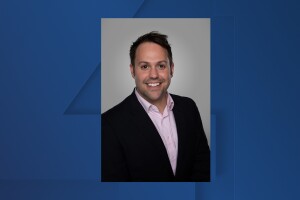 What is your job?
My job is to lead a newsroom full of talented professional journalists to deliver the most important stories to our community on a number of platforms. I lead the teams that create the newscasts you see on KSHB and KMCI but we are much more than just TV news stations. I also lead the teams who write the articles you read on our website and mobile app and the teams that run the 41 Action News social media pages. I’m also responsible for the content you see on our streaming services, such as our Roku app. My other role is also to be a dad, a husband, a good neighbor and a proud member of this incredible community.

When did you start working here?
I started working at 41 Action in News in December 2019 and was incredibly fortunate to experience the Chiefs’ playoff run and Super Bowl win during my first couple of months here.

Where else have you worked?
Before moving to Kansas City with my family, I worked as news director of FOX59 and CBS4 in Indianapolis. Prior to that, I spent a decade in the Pacific Northwest, working at Q13 FOX News in Seattle and FOX12 Oregon in Portland. My roles at those stations ranged from producing newscasts and sports shows to launching newscasts and special programming as senior executive producer and assistant news director. I started my career in broadcasting at CBS 5 in Phoenix and wrote for the East Valley Tribune newspaper in Mesa, Arizona before that.

Where did you go to college?
The Walter Cronkite School of Journalism and Mass Communication at Arizona State University

Where did you grow up?
Mesa, Arizona

What are some of the biggest news stories you have covered or led coverage of?
I have covered several historic elections cycles including the 2008 presidential election where my home state Senator, John McCain, delivered his concession speech just miles from the news station where I worked that night. I’ve been a part of the coverage teams on social injustice/police brutality, immigration debates, gambling & marijuana legal battles and the legalization of gay marriage. I have covered several natural disasters including the deadliest landslide in US history in Oso, Washington. I have covered too many school and mass shootings, as well as the impact of historic violence in our community. I have covered the heroin and opioid abuse epidemics, the economic downturn and homelessness crisis. I count myself among the fortunate to cover several championship sports teams including the Kansas City Chiefs and Seattle Seahawks of the NFL, the Seattle Sounders and Portland Timbers in Major League Soccer and the Seattle Storm of the WNBA.

What is your philosophy on news?
I believe local news should serve our local community and provide tools to navigate the challenges we all face. I believe in shining a light on the hidden problems, the injustices and anything that prevents an even playing field. I also believe in shining a light on the local heroes and those who make our community a better place to live. I strongly believe in accuracy and fairness, and holding those in power accountable in story-telling.

What do you love about living here?
In addition to the BBQ and sports teams, I love the people here. I love raising my children in a place that values character and work ethic. I love the arts and music. I love the parks, playgrounds and the fast-changing weather. I love the passion of the people to make this one of the great American cities.