KANSAS CITY, Mo. -- Police are investigating the circumstances of a woman shot Friday morning, and while the woman is expected to recover from her injuries, the shooting isn’t the only thing police are trying to understand.

As residents in the neighborhood near 24th Street and Drury Avenue reported the disturbance around 11 a.m., they witnessed a man without clothes running from the crime scene. 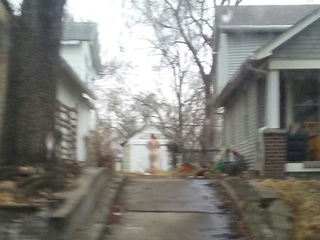 Police said the nude man was seen running from a house near 23rd Street and Oakley where a woman was shot in the leg.

“I told my roommate there’s a naked man! And it’s cold outside! I wonder what he did because he didn’t have anything on,” witness Peggy Bise told 41 Action News.

The homeowner told officers the victim and the naked man were together in a bedroom. That’s when another man showed up asking to borrow money.

While the homeowner was doing laundry, she heard a gunshot.

As paramedics tended to the shooting victim, police dealt with the nude man.

Bise spotted him from her living room window and alerted her roommates who stepped outside.

“I come out here to see what’s going on and police come up here at the corner of the street and he stopped and he goes, ‘Have you guys seen somebody?’ And then I told him, ‘Yeah, my roommate saw a naked man running in between two houses,'” said one of Bise’s roommates, Edmond Dayton.

The nude man managed to find some clothes while he hid from officers.

“The cop said, ‘That’s our guy right there,’” Dayton said. “The guy put his hands up—right up in the air—walked slow to them and then they searched him, and then handcuffed him immediately and took him over to that car and then they try to ask him a bunch of questions; I think he had his I.D. on him.”

Detectives are still investigating the naked man’s role in the shooting but do not believe he is a suspect.

Police said the man who pulled the trigger left the area in a car.