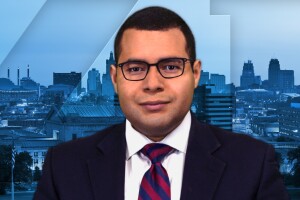 Gutierrez comes from NBC 5/KXAS-TV. During his time with KXAS, he contributed to coverage that garnered national attention including the fertilizer plant explosion in West, Texas, the death of Navy SEAL sniper Chris Kyle, the murder of two county prosecutors in Forney, Texas and the capture of a Miami fugitive in north Texas.

Prior to reporting in Dallas-Fort Worth, Gutierrez spent two and a half years with NBC News, MSNBC and WNBC-TV as an Emma L. Bowen Foundation work-study scholar where he assisted and field produced for daily newscasts as well as broadcast specials.

Gutierrez is a member of the National Association of Hispanic Journalists and is fluent in both English and Spanish.

He was born and raised in New York City and is a graduate of New York University with a degree in communications and journalism.