1 dead, 1 injured in shooting near 18th and Vine Jazz District 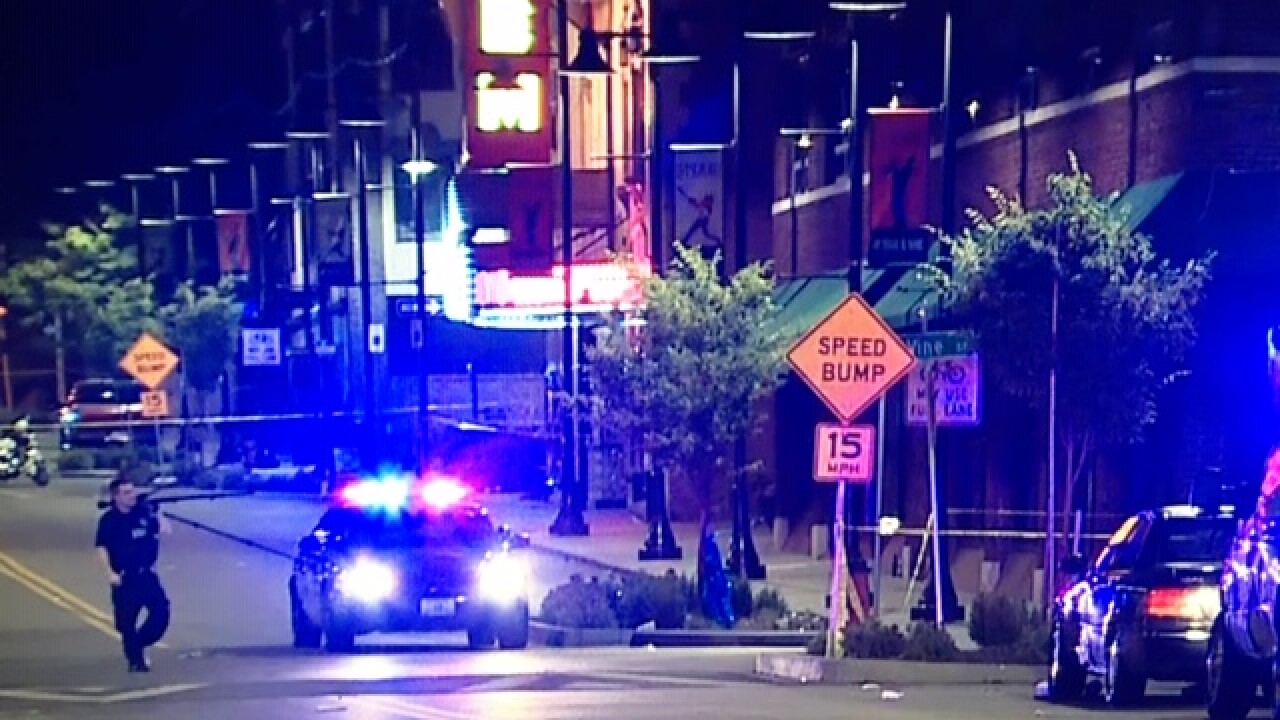 Copyright 2020 Scripps Media, Inc. All rights reserved. This material may not be published, broadcast, rewritten, or redistributed.
Ron Busse/KSHB
City leaders responded with disappointment and pledges to find a solution after one person was killed and another injured in an overnight shooting at the 18th and Vine Jazz District.

KANSAS CITY, Mo. — City leaders responded with disappointment and pledges to find a solution after one person was killed and another injured in an overnight shooting at the 18th and Vine Jazz District.

Kansas City, Missouri, police were called to the area just before 1:45 a.m. on a reported shooting and found a man on the ground, who had died after being shot.

A second male victim was transported to an area hospital with non-life threatening injuries.

KCMO Mayor Quinton Lucas expressed his disappointment that a festive day in the neighborhood ended in tragedy.

I am deeply disappointed that a festive day ended again in tragedy in my home district at 18th & Vine. Long after establishments had closed, gunfire rang out. We'll pursue every option available to ensure residents and businesses in the area can be safe. https://t.co/a7V9FKixSM

The Jazz District hosted Juneteenth on the Vine on Saturday, a celebration of the end of slavery in the final U.S. state nearly two years after the Emancipation Proclamation and end of the Civil War.

"I am deeply saddened by the state of affairs in our City, especially at 18th and Vine," Robinson wrote.

She said it's difficult to sustain the 18th and Vine Jazz District, which includes the Gem Theater and American Jazz Museum as well as the Negro Leagues Baseball Museum, amid "senseless violence and inadequate preventative public safety measures."

Robinson said the Jazz District lacks the financial support to pay for off-duty officers, which are present in other entertainment districts.

"My office is working on an immediate stop-gap measure to increase public safety for 18th and Vine," she said.

Robinson said she worked with KCPD before Juneteenth on the Vine to ensure there would be a police presence for the event.

After receiving a complaint from a business owner in the area around 1 a.m. of large crowds, she again contacted KCPD, which dispatched officers to the area.

"I am looking into the preventive public safety performed on Saturday and will work to ensure increased safety measures are implemented this week," Robinson said. "The residents, visitors, business owners and those who have built and sustained 18th and Vine deserve better. My deep condolences to the families of the victims of violence."

At 18th and Vine now. Vigilant business owners and residents are fed up. The District and residents deserve better. This is senseless and tragic. pic.twitter.com/W82M4e0xod

Anyone with information about the shooting is asked to call the KCPD Homicide Unit at 816-234-5043 or the Greater Kansas City Crime Stoppers Tips Hotline at 816-474-TIPS (8477). Tips, which can be anonymous, that lead to an arrest could be eligible for a $25,000 cash reward.

There have now been 85 homicides in KCMO in 2020, which is well ahead of the pace for any of the past four years.