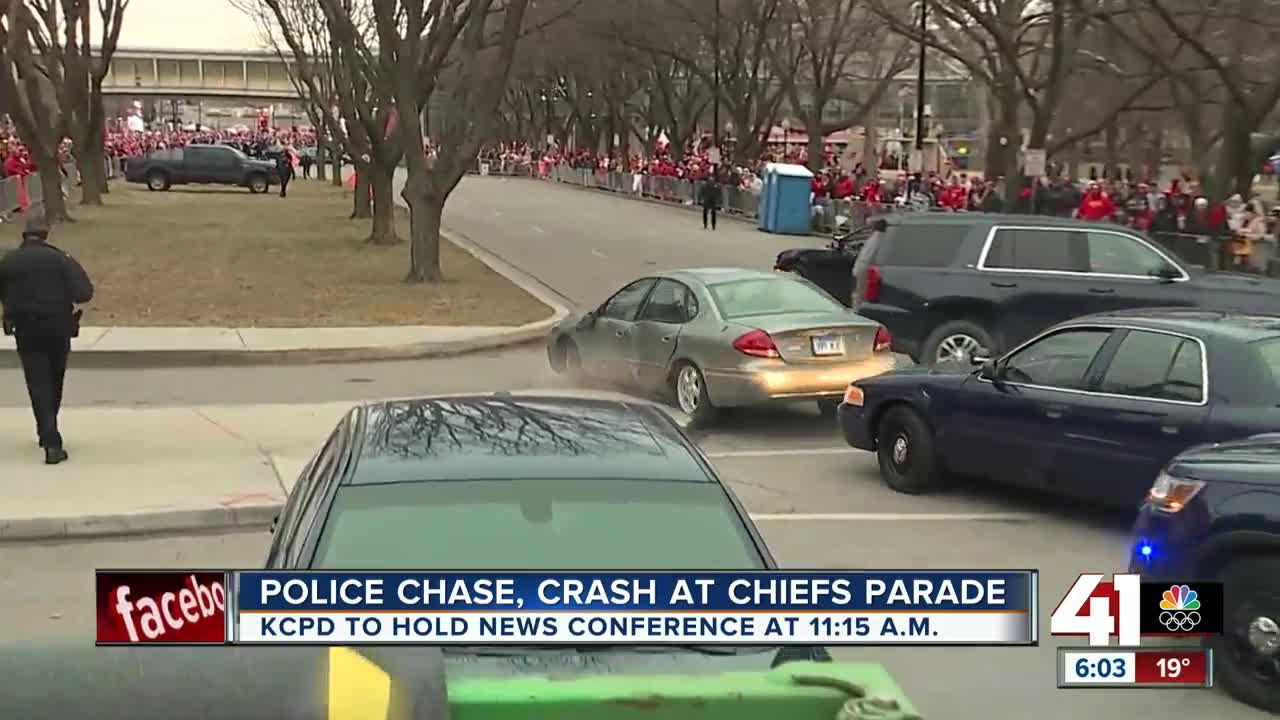 No one was hurt when police pursued a vehicle down the parade route ahead of the Chiefs parade Wednesday. 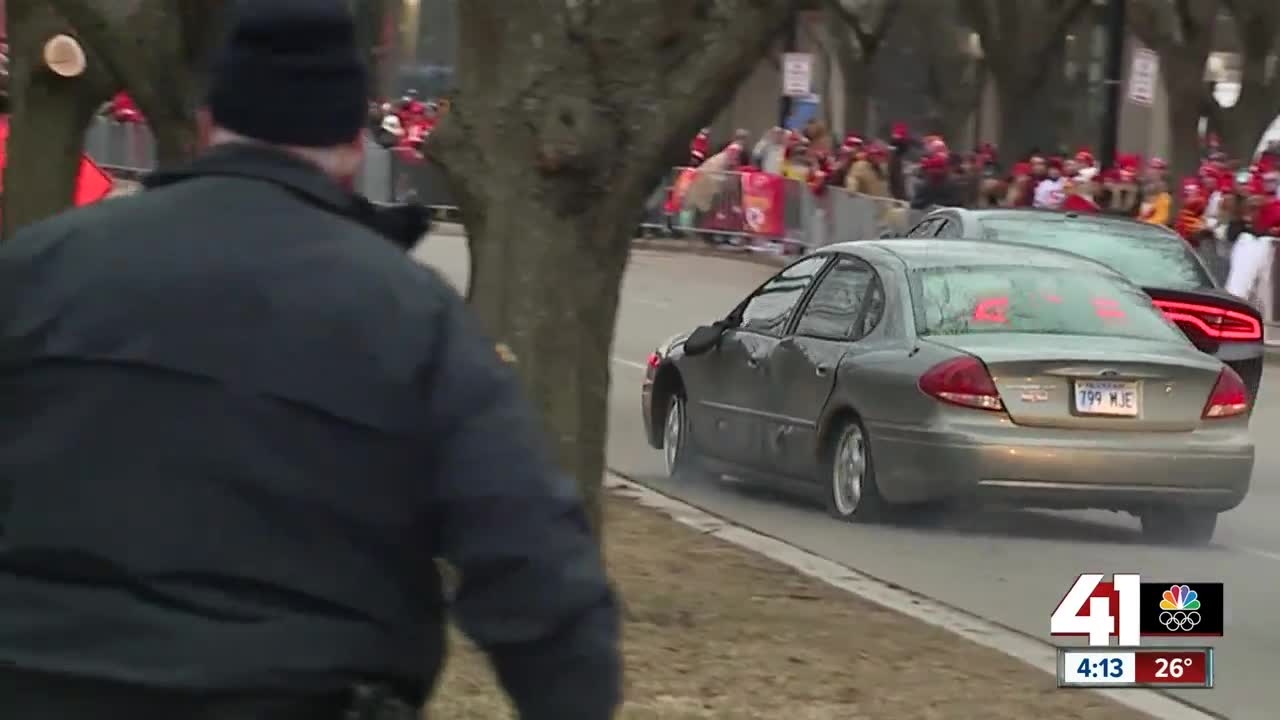 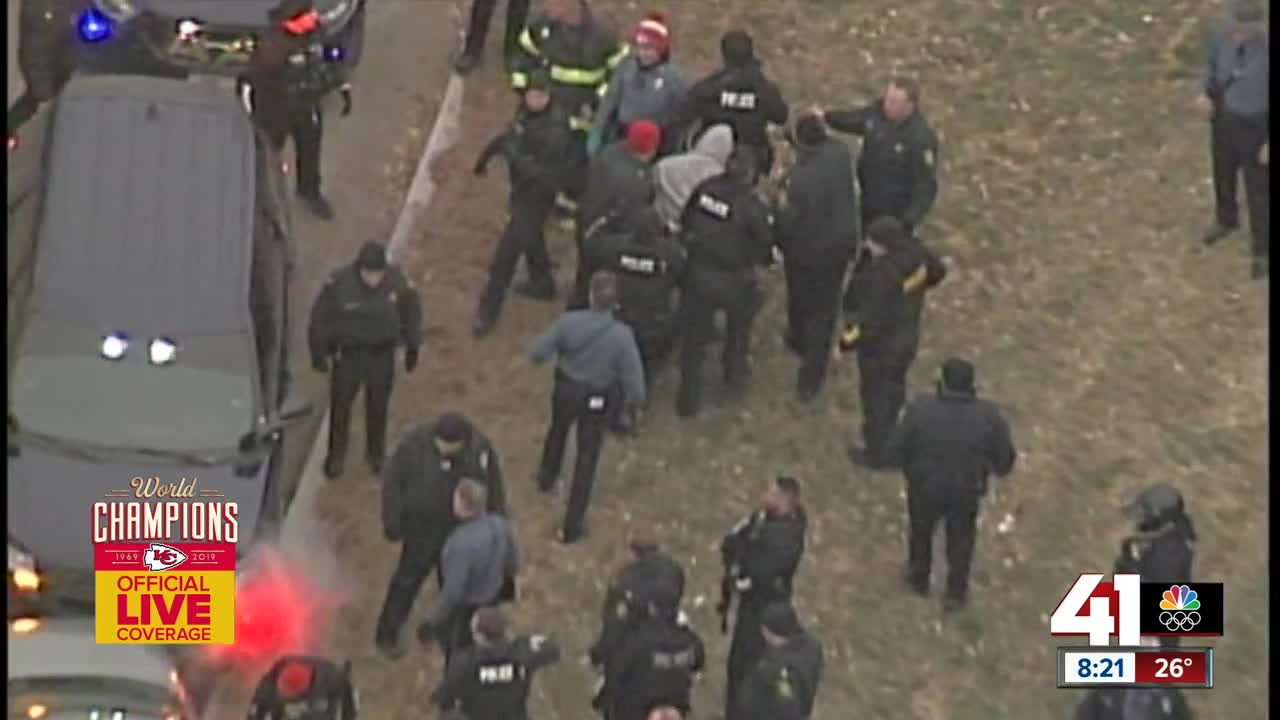 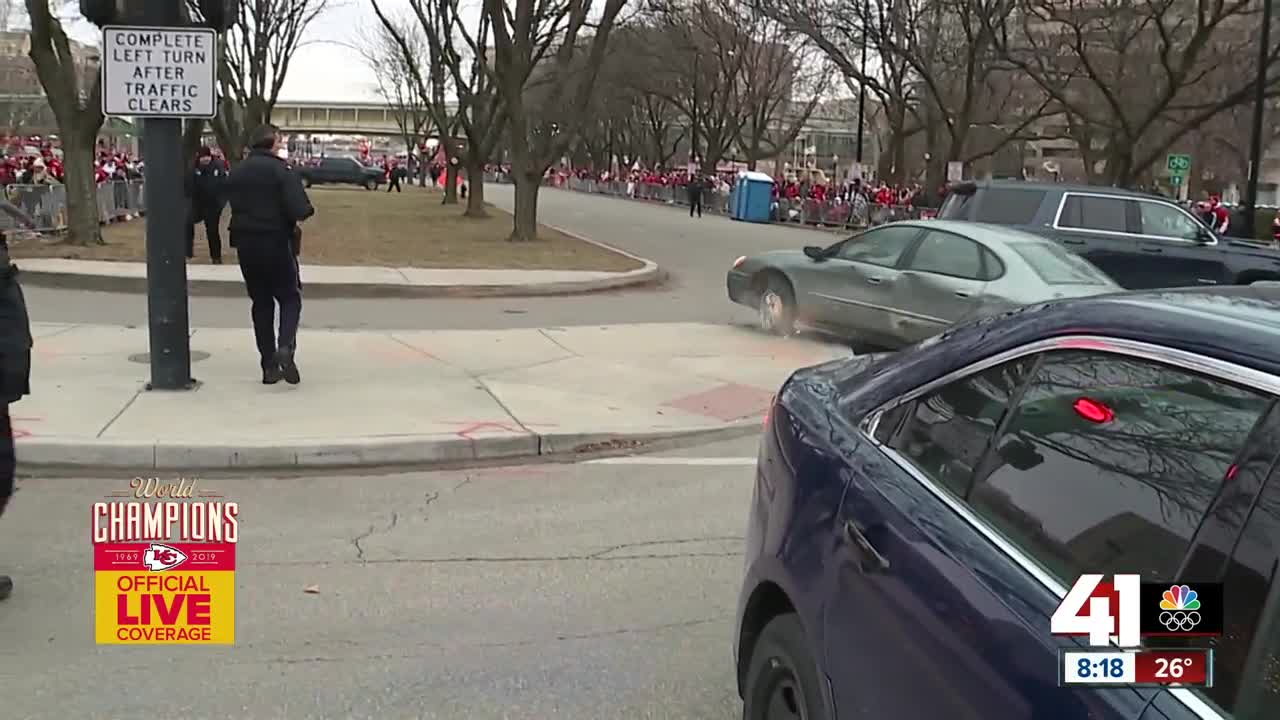 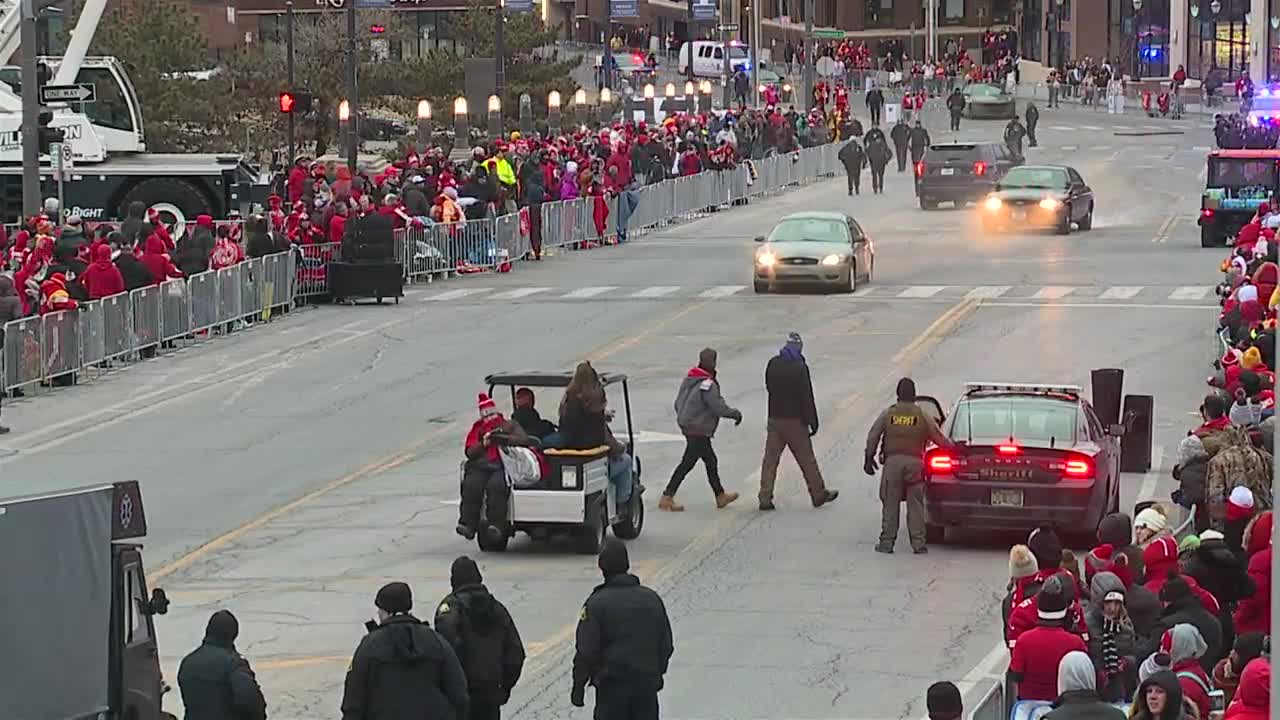 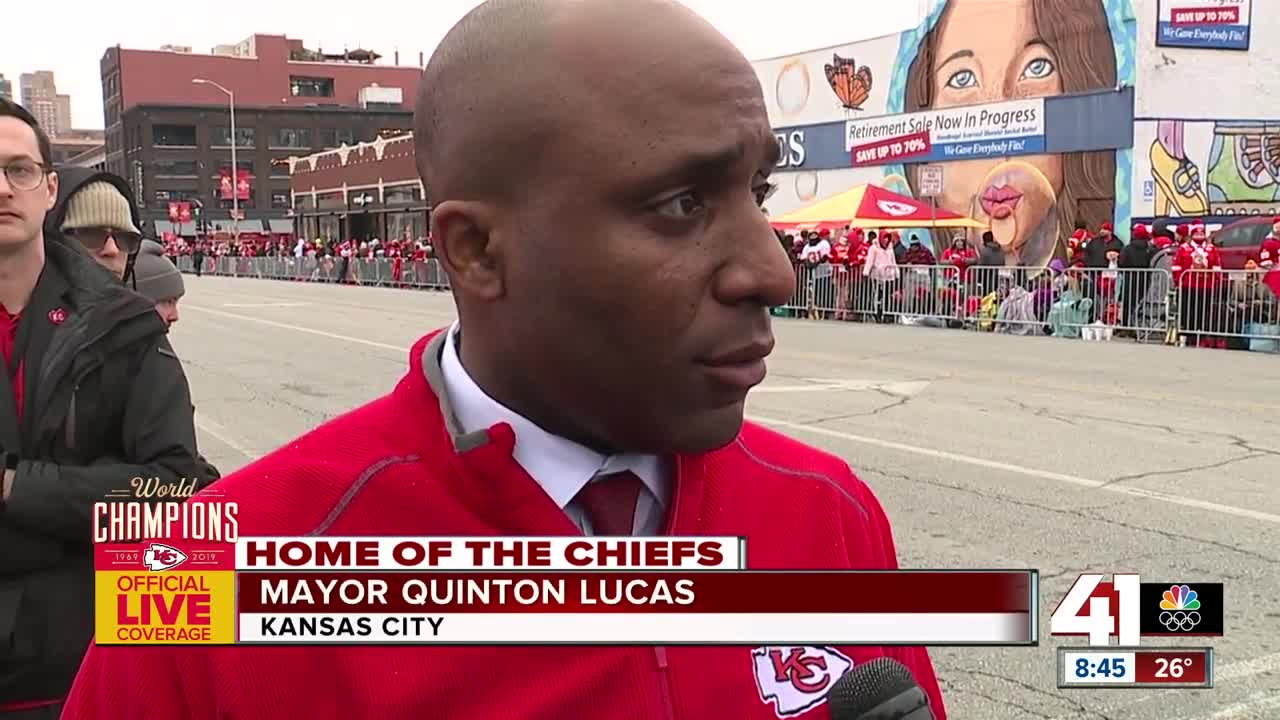 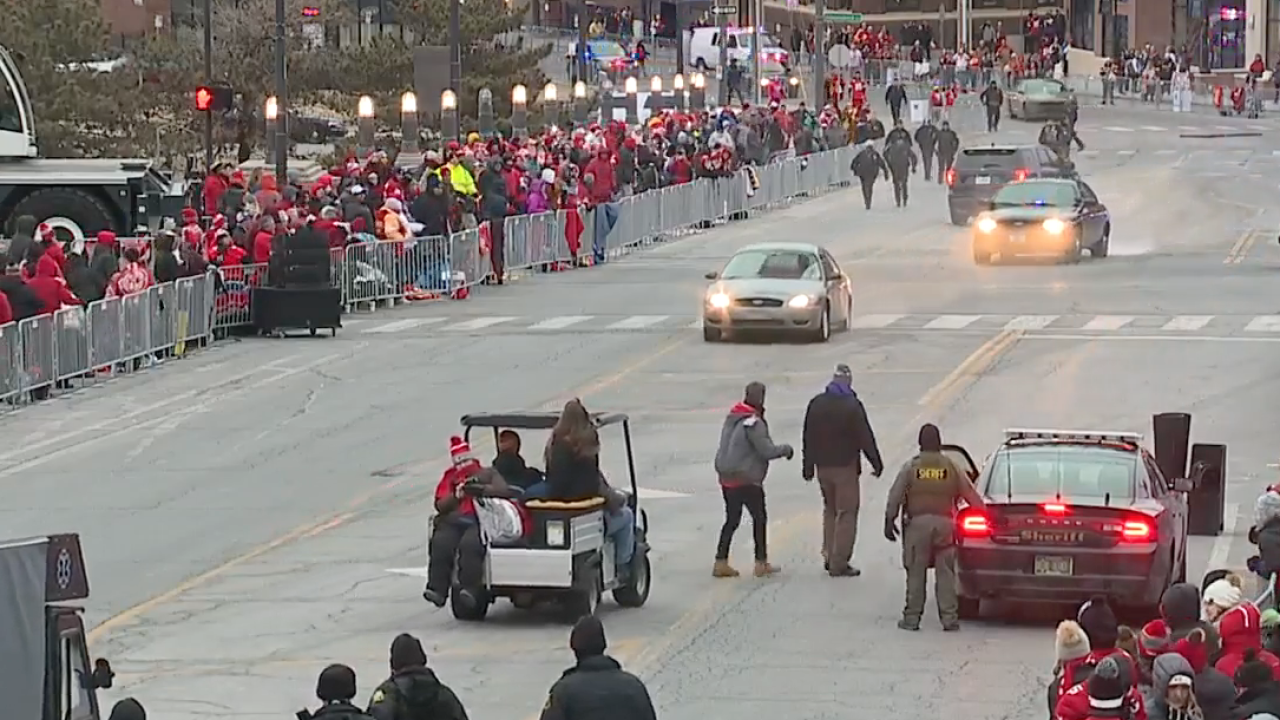 KANSAS CITY, Mo. — Kansas City, Missouri, police said the Chiefs Kingdom Champions Parade route was "100% secure" after law enforcement had to chase down a person who drove their vehicle through a barricade on Wednesday morning.

The incident began shortly before 8:15 a.m. when the vehicle drove through a barrier on the north side of the parade route in downtown KCMO.

"We knew something was going on, but we didn’t realize it was this serious," Pam Tobin, a spectator along the route, told 41 Action News.

KCPD spokesman Sgt. Jake Becchina said all officers along the route were alerted, and several vehicles were in pursuit "very quickly."

"I stood there in shock and my daughter took off running," said Sheri Arentsen, who also witnessed the chase. "Luckily, that’s when I saw her and was able to keep up with her."

"We thought we had it stopped down there and he did some maneuver and got out and then we had to chase him on the route, which is not ideal," KCPD Maj. Scott Carson said.

The car continued to drive south and was headed for a crowd when officers, including Carson, used tactical vehicle intervention, also known as a PIT maneuver. The maneuver ended the chase at Pershing Road.

No injuries were reported, Becchina said.

The driver was taken into custody and booked on investigation of DUI and other traffic-related offenses, police said later Wednesday afternoon. A passenger in the vehicle was detained by police but not charged with anything.

Police also searched the vehicle and found no weapons and "no indications of terrorist activity."

The car was towed from the scene shortly after the conclusion of the chase.

Crews are now towing the car from inside the barricades at the Chiefs Kingdom Parade. https://t.co/WEYbM9vQI3 pic.twitter.com/vSSUA0xaC5

Police Chief Rick Smith praised the officers for their work bringing the incident to an end.

"We had a plan in place, we executed it well," Smith said.

"I want to commend the Kansas City Police Department for what was a very quick response in a situation that could have been much worse," Lucas told 41 Action News.

Appreciate the quick action of the @kcpolice ending a chase of a suspected impaired driver at the parade route. We’ll stay vigilant about the threats like these throughout the day. #KCMO #KCPD