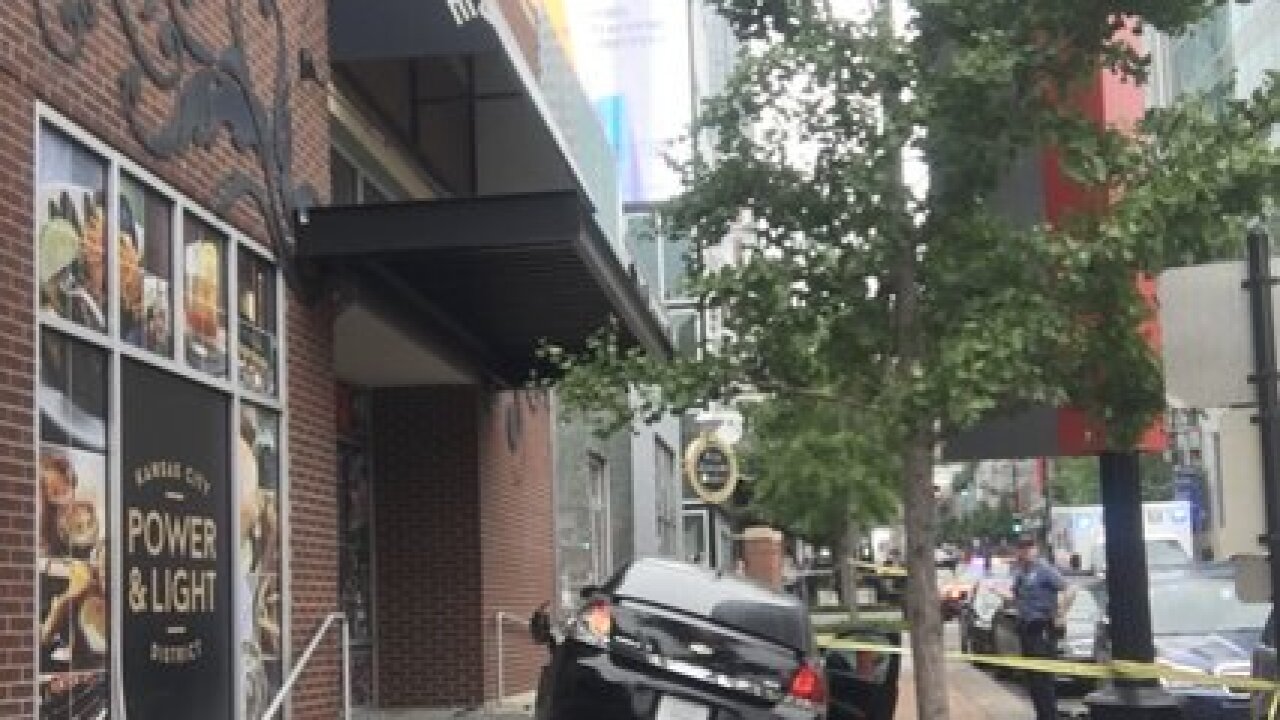 Copyright 2018 Scripps Media, Inc. All rights reserved. This material may not be published, broadcast, rewritten, or redistributed.
RideKC Streetcar via Twitter
<p>What started as a carjacking at Brush Creek Boulevard and Virginia Avenue ended with a vehicle off the road and high-centered on concrete steps near the Drunken Fish, a popular sushi restaurant in the Power & Light District.</p> 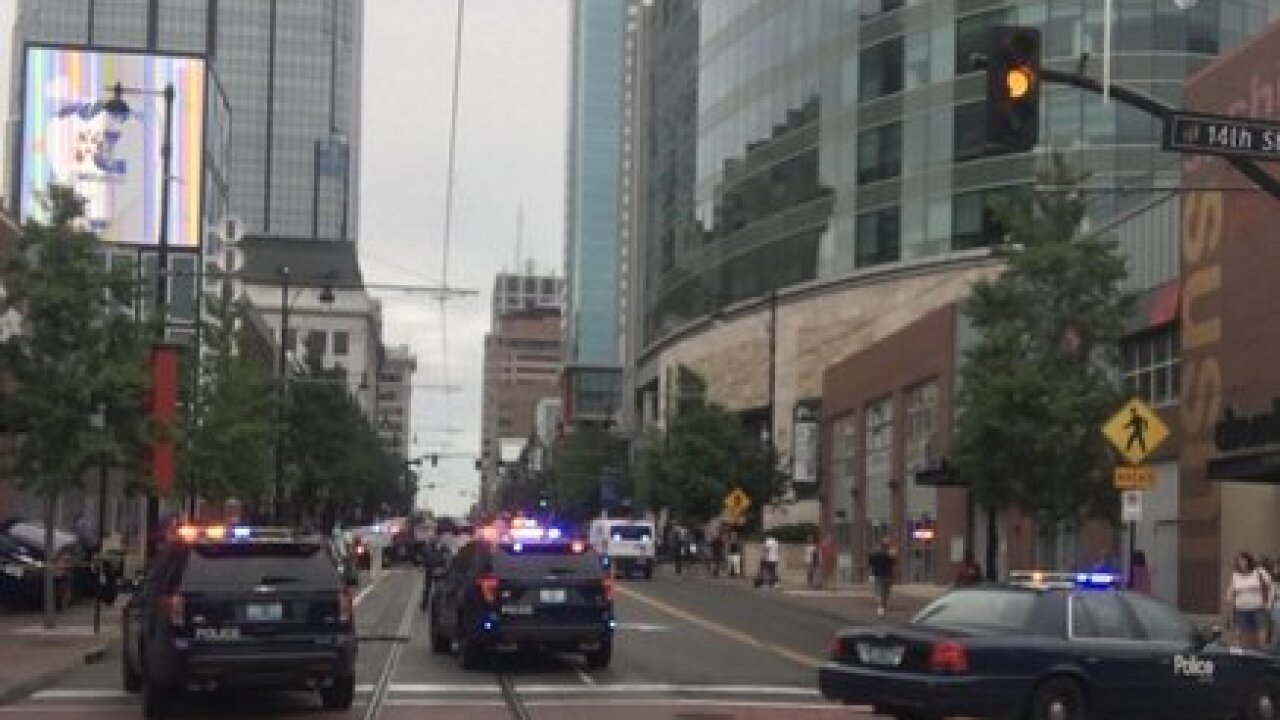 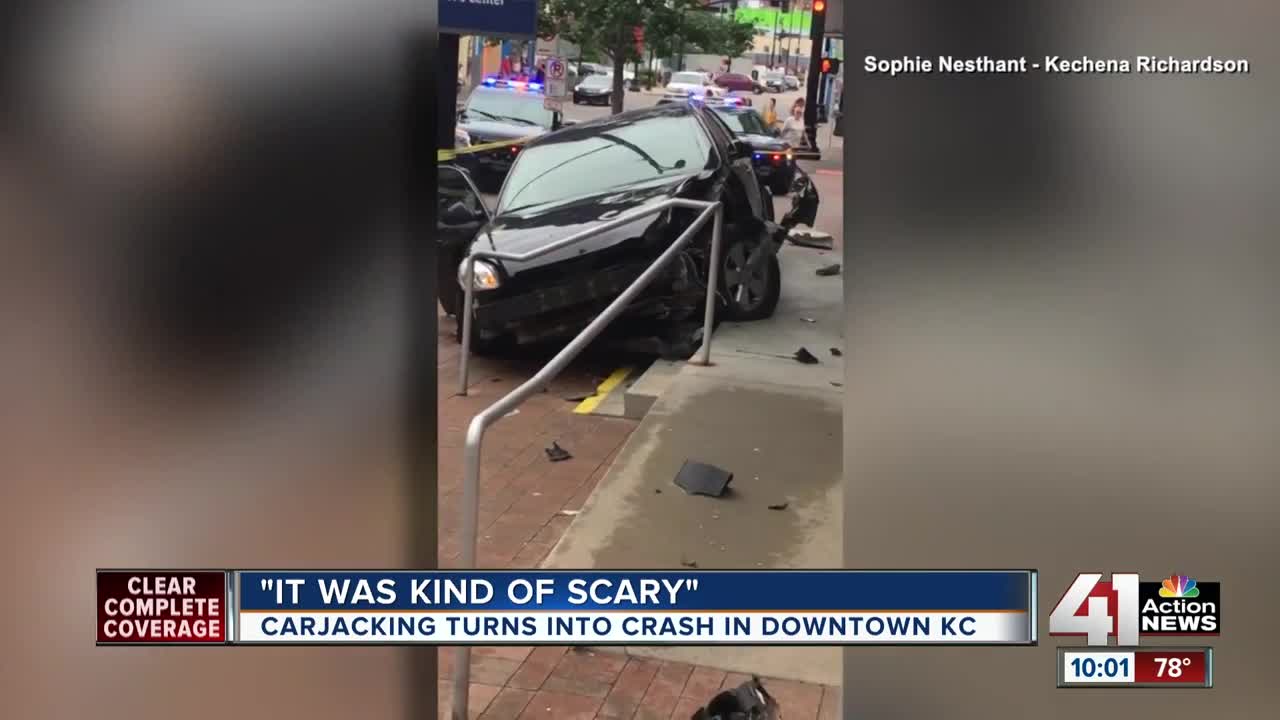 KANSAS CITY, Mo. — What started as a carjacking at Brush Creek Boulevard and Virginia Avenue ended with a vehicle off the road and high-centered on concrete steps near the Drunken Fish, a popular sushi restaurant in the Power & Light District.

Fortunately, no one was hurt, but it made for a harrowing few moments as crowds gathered Saturday night for the Imagine Dragons concert at the Sprint Center.

Police are still investigating the armed robbery/carjacking, but KCPD patrol officers spotted the suspect vehicle near 20th and Main Streets and initiated a chase.

Stop sticks were successfully deployed at 18th and Main Streets.

When the vehicle tried to turn westbound a few blocks later, it careened off the road and hit the building.

"I heard this loud crash, and what I thought it was my big sign behind me fell to the ground, because it was so loud and it was right here in front of the store,” said Zafar Salon, Spa and Boutique owner Gi Gi Jones.

No pedestrians were injured, but an eyewitness there were dozens of people on foot in the vicinity, including some parents with children.

The suspect, who was taken into custody after a brief foot chase, sustained a small scratch on his forehead in the crash but refused treatment before his arrest.

The building didn’t sustain any damage, but the incident did halt RideKC Streetcar service for about a half-hour. Streetcars were running again by 6:30 p.m.

An eyewitness said police approached the vehicle with guns drawn and bystanders tried to help halt the fleeing suspect.

"There was a gentleman with his wife standing right there and they saw the guy and they tripped him," said Javier Ortiz, who works nearby. "It was kind of scary, because there were a lot of people just walking on the sidewalk."

Everyone was grateful there were no serious injuries, but now the ordeal simply makes for a wild story to tell friends and family.

"It was my birthday for (goodness) sake,” Jones said, “and after I noticed that no one was hurt, I said, ‘That's how Gi Gi does it. She takes it out in a bang doesn't she.’”