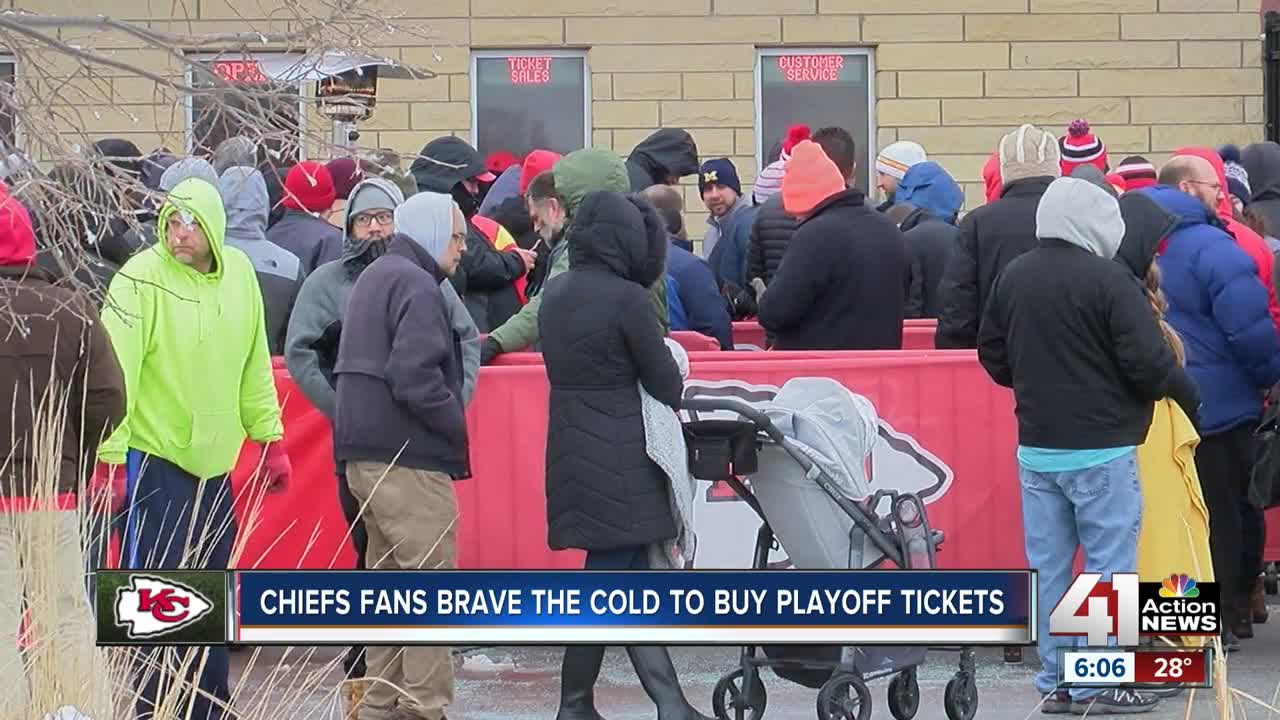 Diehard Chiefs fans started lining up outside the Arrowhead Stadium ticket office 12 hours before the windows opened to buy tickets to the AFC Championship game. 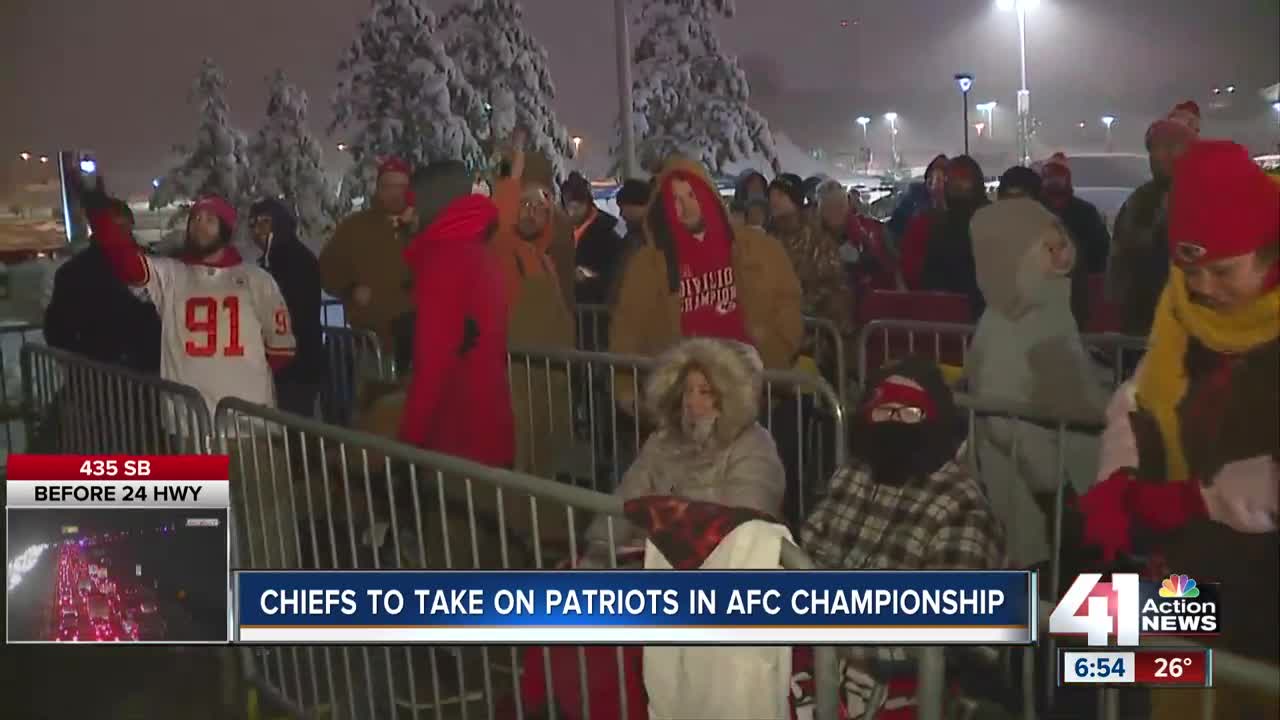 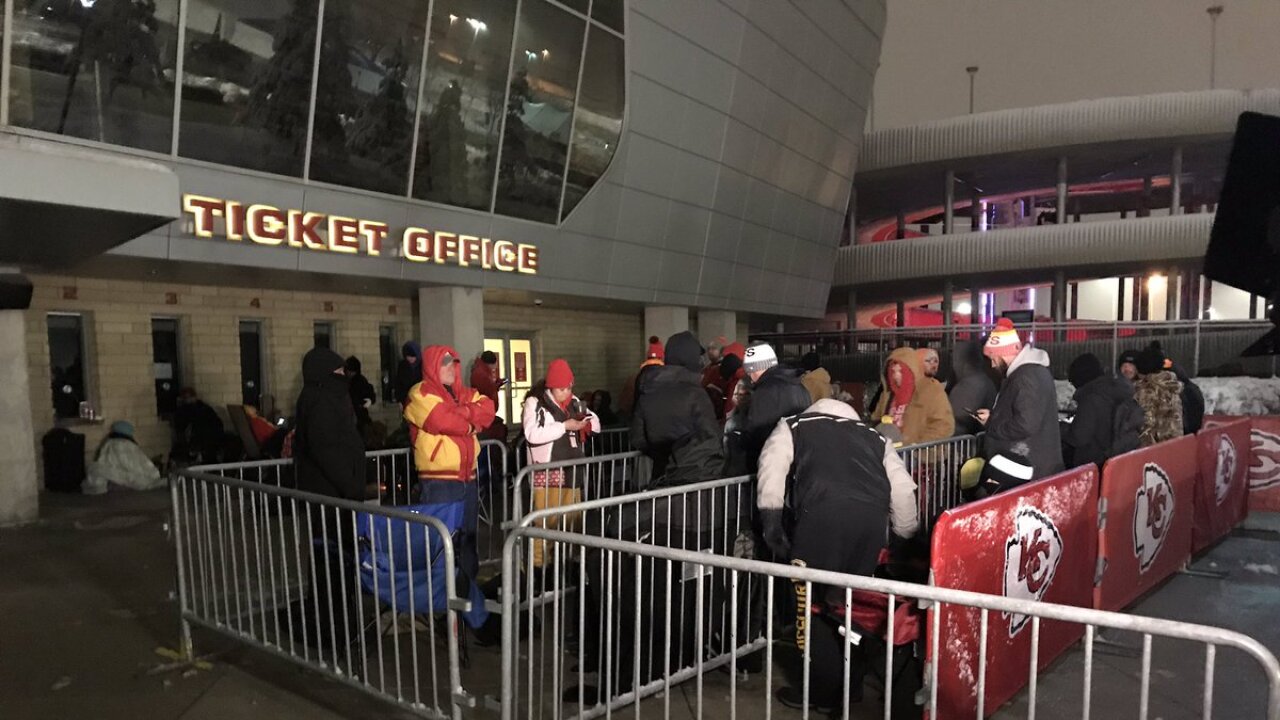 KANSAS CITY, Mo. — There are Chiefs fans, and then there are diehard Chiefs fans.

Those diehard fans started lining up outside the Arrowhead Stadium ticket office 12 hours before the windows opened to buy tickets to the AFC Championship game.

Pre-sale tickets went on sale at 9 a.m. Monday to Jackson County residents and season ticket holders. The first two people in line showed up at 9 p.m. Sunday. By 7 a.m. Monday, more than 100 people were in line waiting for the ticket office to open.

Bliss said he became a Chiefs fan after moving to Kansas City in the early 1990s.

“I got free tickets in the nosebleed section and got roped into the Marty Schottenheimer, Neil Smith, Derrick Thomas fever, and it’s held ever since,” he said proudly.

Tickets to the general public go on sale online at noon Monday. But to get the pre-sale special, fans had to buy their tickets in person, which meant standing in below-freezing temperatures.

Jared Kleinowski arrived at 4 a.m. with a charcoal burner to keep a warm fire going in line.

“It’s not bad at all. There is camaraderie here," Bliss said. "The guy brought the fire, which is wonderful. It’s a lot easier when you don’t have to face the misery by yourself."

He said the cold wait is worth it to guarantee he gets the tickets he wants, and it will pay off when the Chiefs punch a ticket to the Super Bowl by beating the New England Patriots. Kickoff is at 5:40 p.m. Sunday.

“When we win, when we beat the Patriots and Tom Brady finally retires, it’ll be wonderful,” Bliss said.