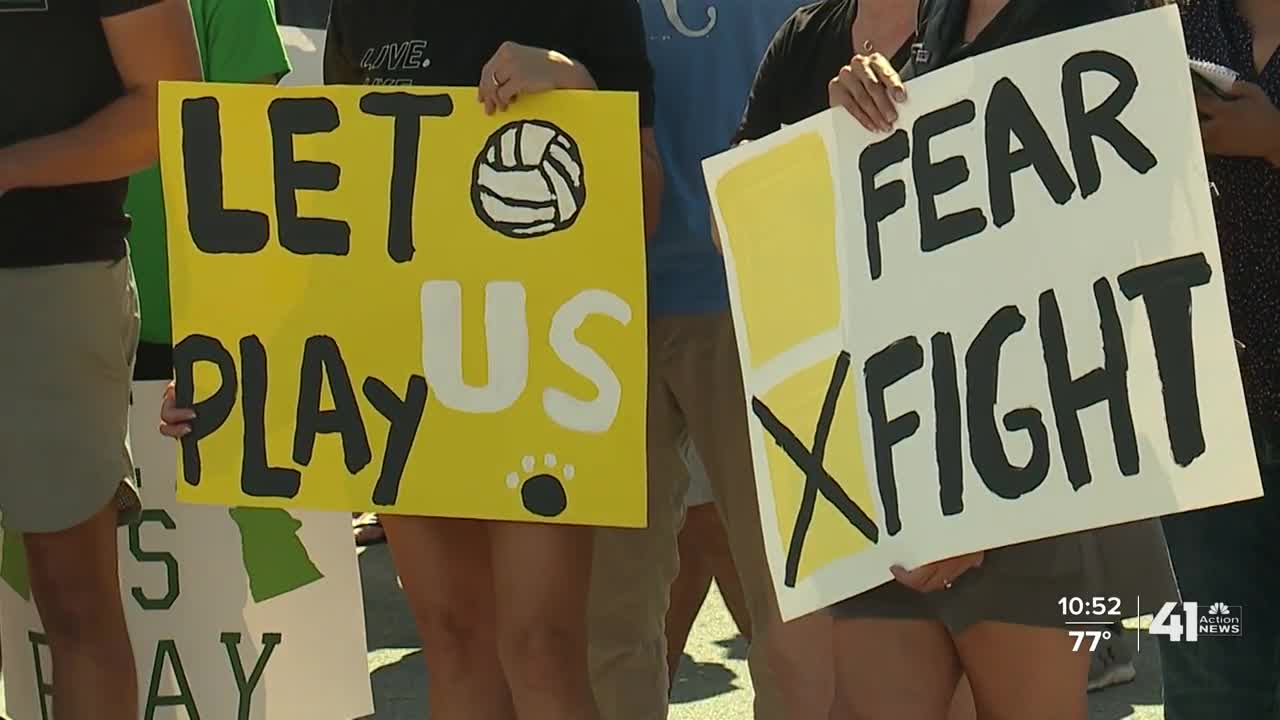 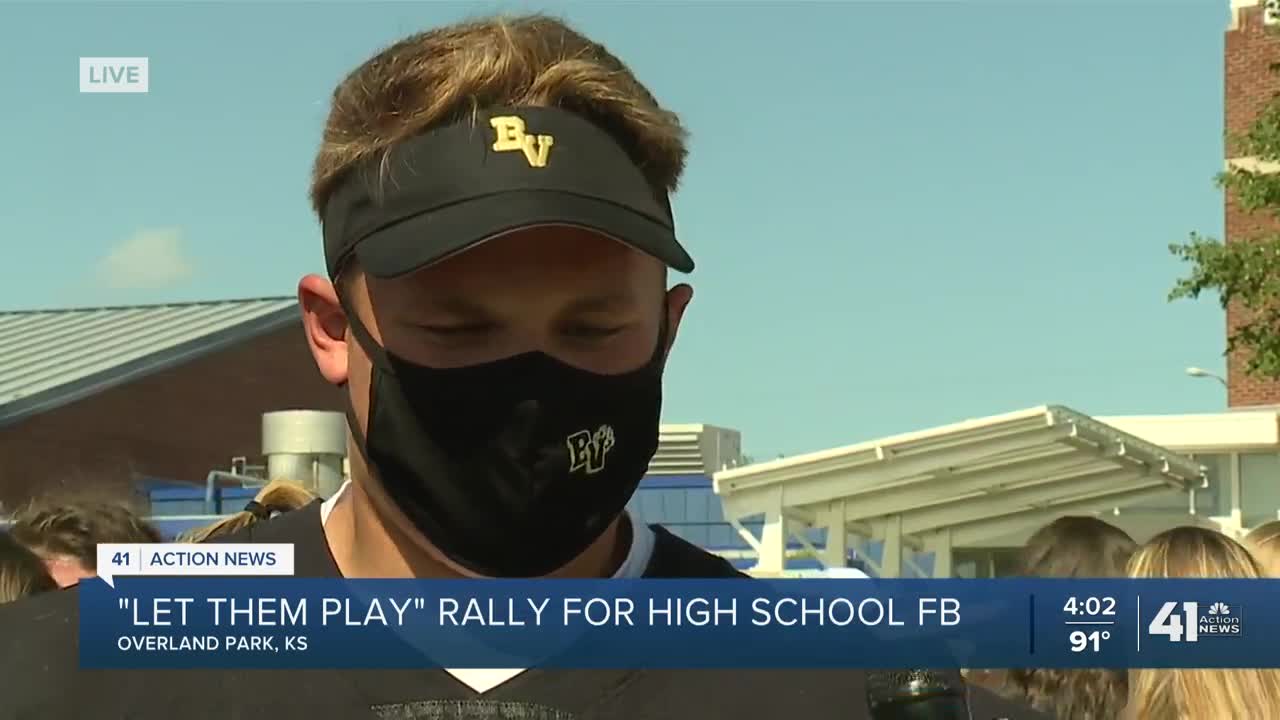 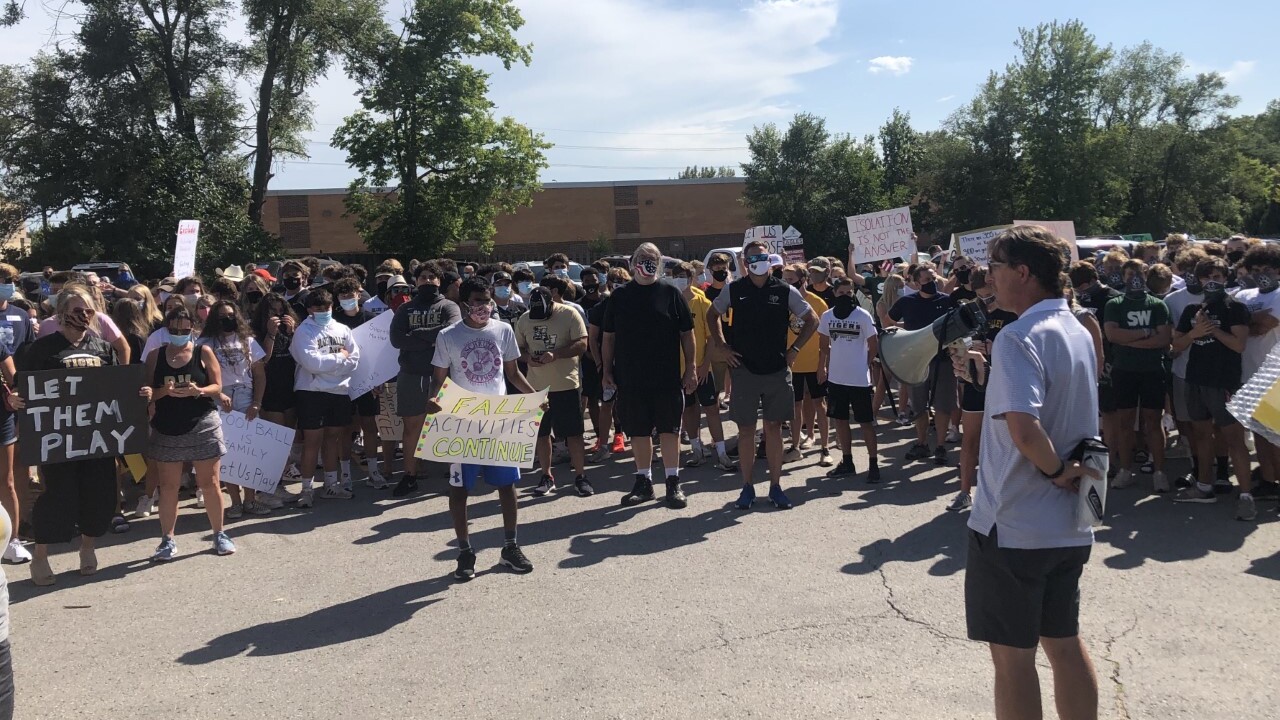 OVERLAND PARK, Kan. — As more football teams across the city are being forced into COVID-19-related quarantine, more than a hundred Blue Valley School District students, parents and athletes gathered Thursday for a “Let them play” rally.

Those at the rally, which started around 4 p.m., believe it’s important to return to sports, an idea they are hoping to convey to Blue Valley school leaders.

The goal is to convince the Board of Education to hold a special meeting and change the gating criteria laid out by the Kansas Department of Education.

“What we are asking them to do is look at the full perspective of numbers,” rally organizer Christine Vasquez said. "We ask them to make it Blue Valley specific in our zip codes and age specific. There was not a conversation around that."

Blue Valley Superintendent Dr. Tonya Merrigan said she wants high school athletics to happen, but that it must be in a safe manner.

“We want that to happen with whatever medical advice we have, but the advice we have is from that gating criteria," she said. "As far as getting the gating criteria changed again, that would involve more action and, at this point, we don’t have a special board meeting scheduled.”

Some people at Thursday’s rally made the argument that student-athletes have already began practicing over the summer, but Merrigan noted that’s because the gating criteria in use now had not been released by the Kansas State Department of Education when summer workouts started.

The Blue Valley Board of Education rescinded the Johnson County Department of Health and Environment's gating criteria in favor of the state's last week.

“That gating criteria was just approved by the board, and that’s why it’s in session now,” Merrigan explained.

Blue Valley North junior outside linebacker Dasan McCullough, who is one of the top players in the class of 2022 and verbally committed to Ohio State last week, knows his future is secure, but he was at the rally to show support for his teammates, who he wants to have the opportunity to play.

“I can’t really say I’m a big fan of it just because I feel like we don’t have enough say," McCullough said. "I don’t really think that the parents, the families, really (don’t) have enough say in what’s going on with school too, not just football. ... There’s a lot of my friends and a lot of guys who really need this season for their future and football is what they really rely on."

“There are some kids that their parents can’t afford to get them on a club team or they can’t afford to take them out to go visit all these colleges," she said. "The only way for colleges to see them is by playing sports in high school."

According to Merrigan, the district will review criteria and where things stand in regards to bringing back fall activities and sports every two weeks, but football won't be played until at least Sept. 18.

“I still don’t think that’s fair to us,” McCullough said. “I feel like you’re giving a couple guys on the board basically all the say for people's futures and kids all around this district.”

Earlier Thursday, 41 Action News learned that the Bishop Miege football team, which isn't part of the Blue Valley district but competes in the Eastern Kansas League with district schools, was subject to quarantine due to positive COVID-19 tests.

The Blue Valley West football team was placed in quarantine after three people affiliated with the team tested positive for COVID-19 last week.