Experts have tips for avoiding disease-carrying bugs like ticks.

JOHNSON COUNTY, Kan. -- They are more than a summertime nuisance and becoming a big concern for people spending time outdoors.

Illnesses from ticks, mosquitoes and flea bites have tripled in the United States. According to the Centers for Disease Control and Prevention, from 2004 to 2016, 640,000 cases were reported. This season, cases are already being reported. 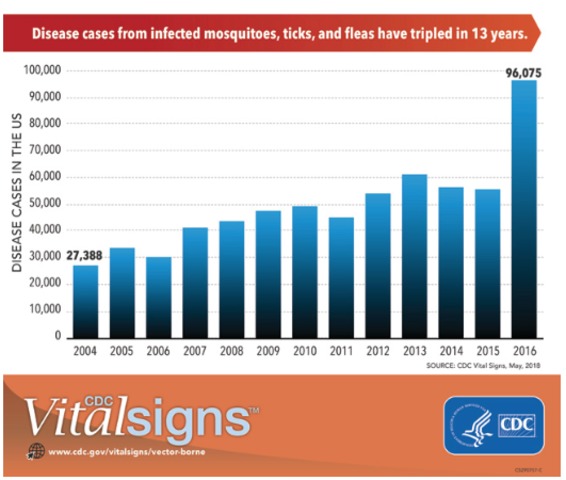 "With lush growth comes ticks and fleas and other insects that come in and thrive in this temperature and this weather," said Jessica Barnett, Kansas State University Research and Extension Agent.

Barnett said due to the quick change in climate, ticks are out earlier than usual. If you're going to be outdoors, she said to avoid brushing up against any trees or shrubs.

"When you make that contact against any vegetation, trees, shrubs, grass, that's when the ticks can come on to your body," said Barnett.

Using a white dish towel, Barnett demonstrated how easy it is for ticks to jump onto people. In just a few minutes, there were a couple of ticks latched onto the towel.

Barnett said the best way to prevent ticks is to wear long clothing or use insect repellant with deet or permethrin. If bitten by a tick, that doesn't always mean you will contract a disease.

"The longer the tick is on the child or on the patient, the more higher risk you have of the infection just because more of that bacteria is being passed," said A. Gabriel Schifman, Medical Director at Overland Park Regional Medical Center, Pediatric Emergency Room Department.

The CDC lists several tick-borne illnesses, but Schifman said there's only a few to worry about in the metro area.

"The only ones that we really worry about are Rocky Mountain Spotted Fever and Ehrlichiosis, those are the two big ones," said Schifman.

If you have been bitten by a tick, Schifman said you can wait to go to the doctor.

Schifman said it could be seven days following a tick bite before people experience symptoms like a fever or rash, which can easily be tested and treated with antibiotics.

Currently, there is no vaccine to prevent tick-borne illnesses for humans.