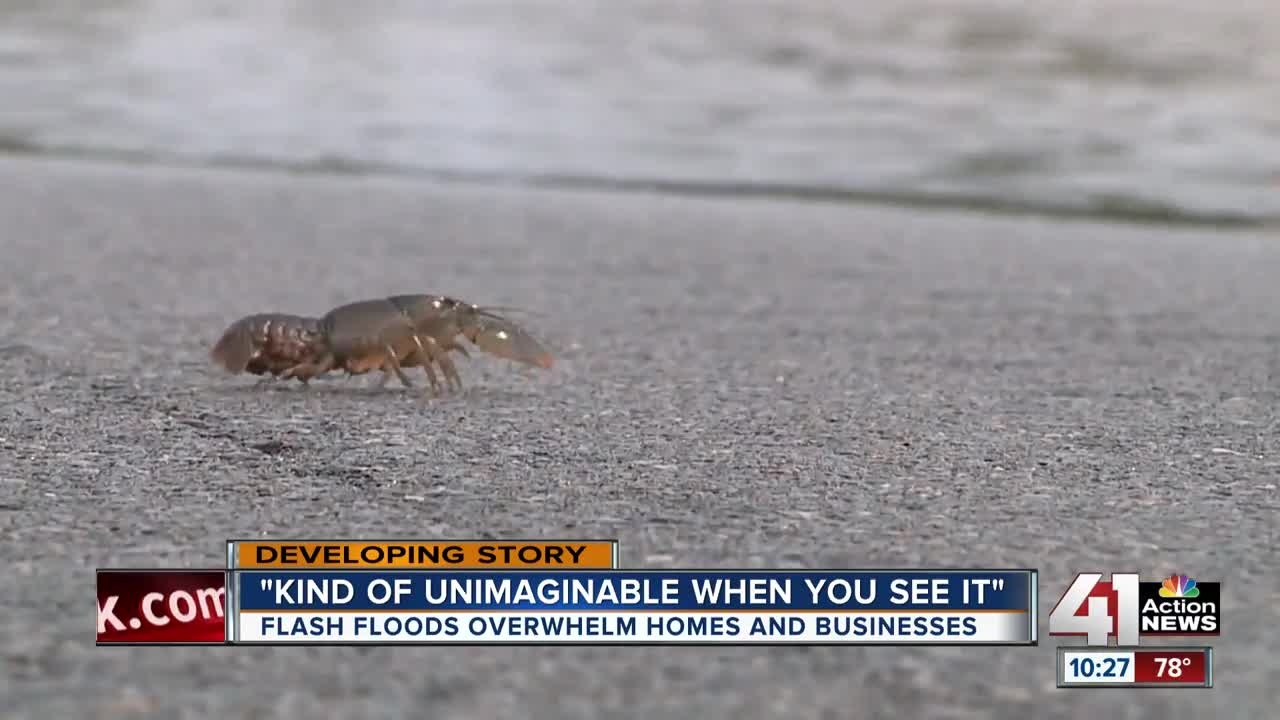 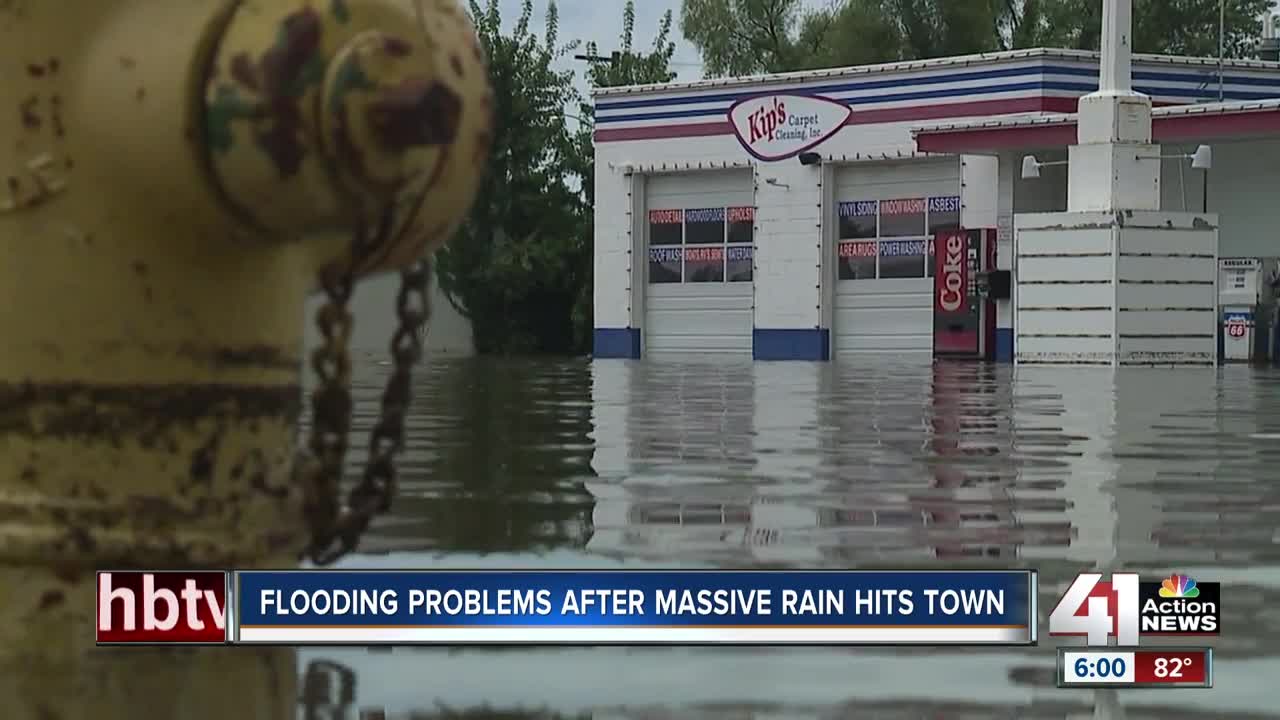 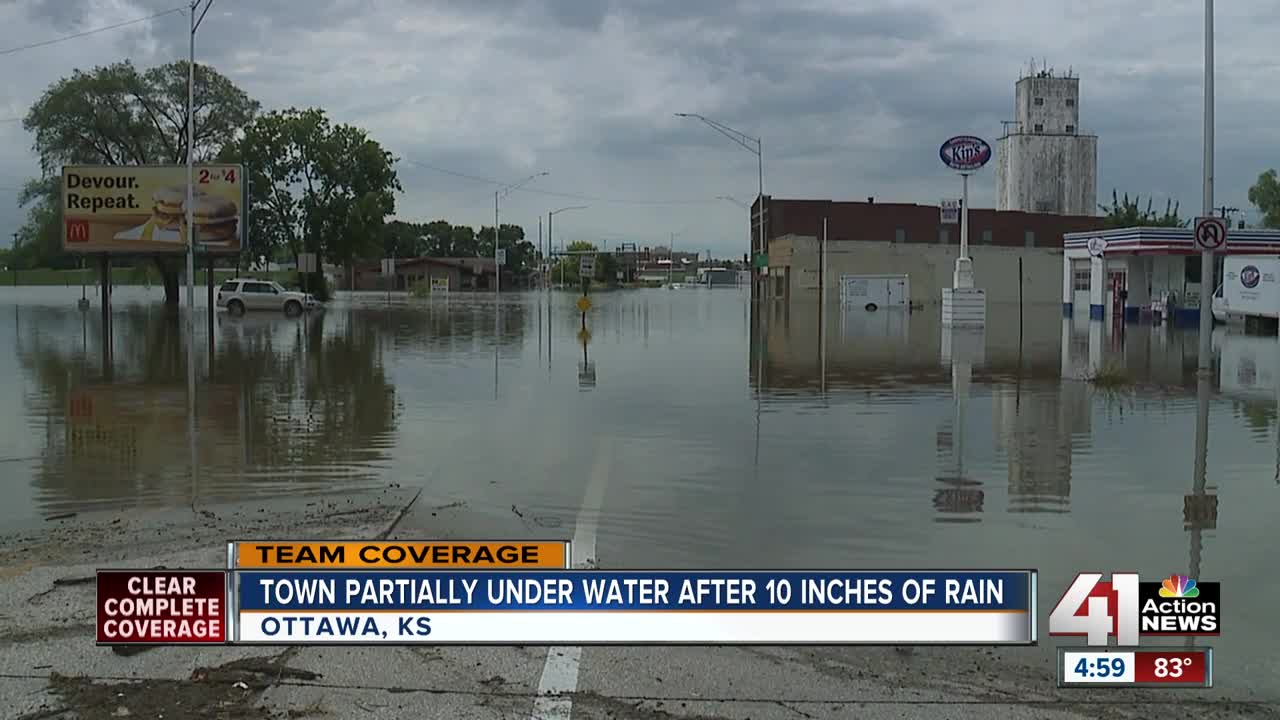 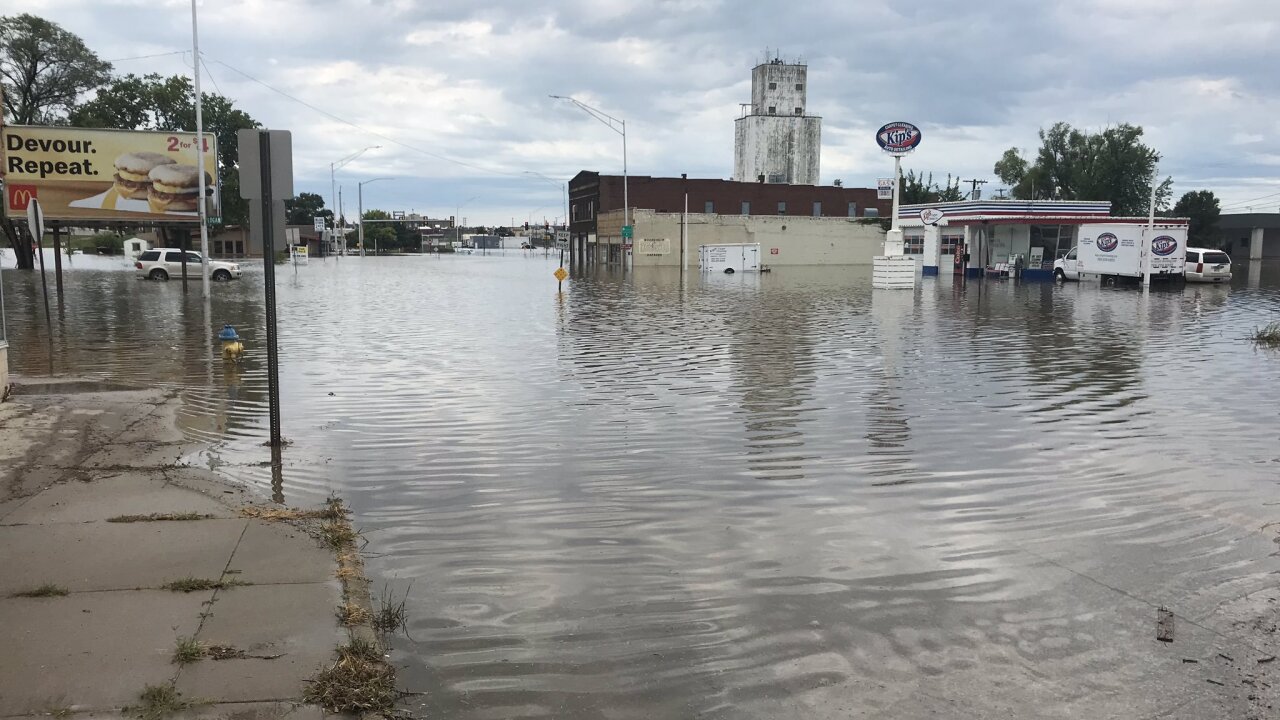 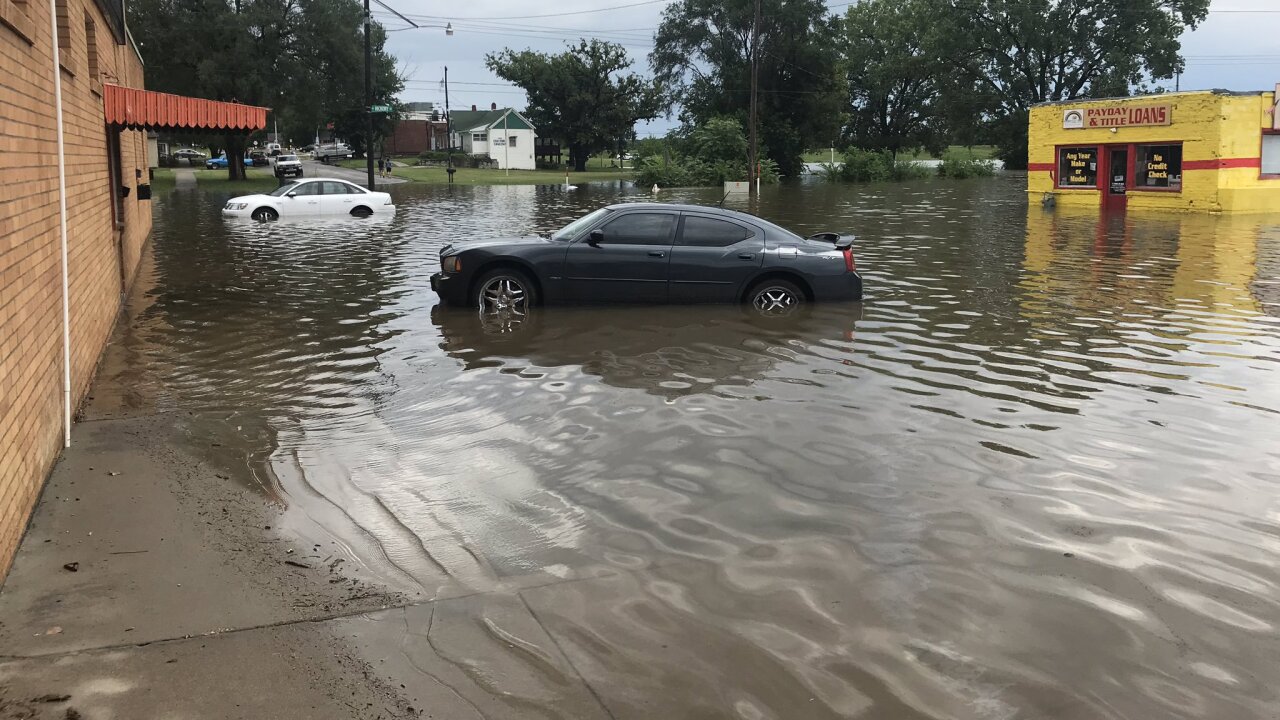 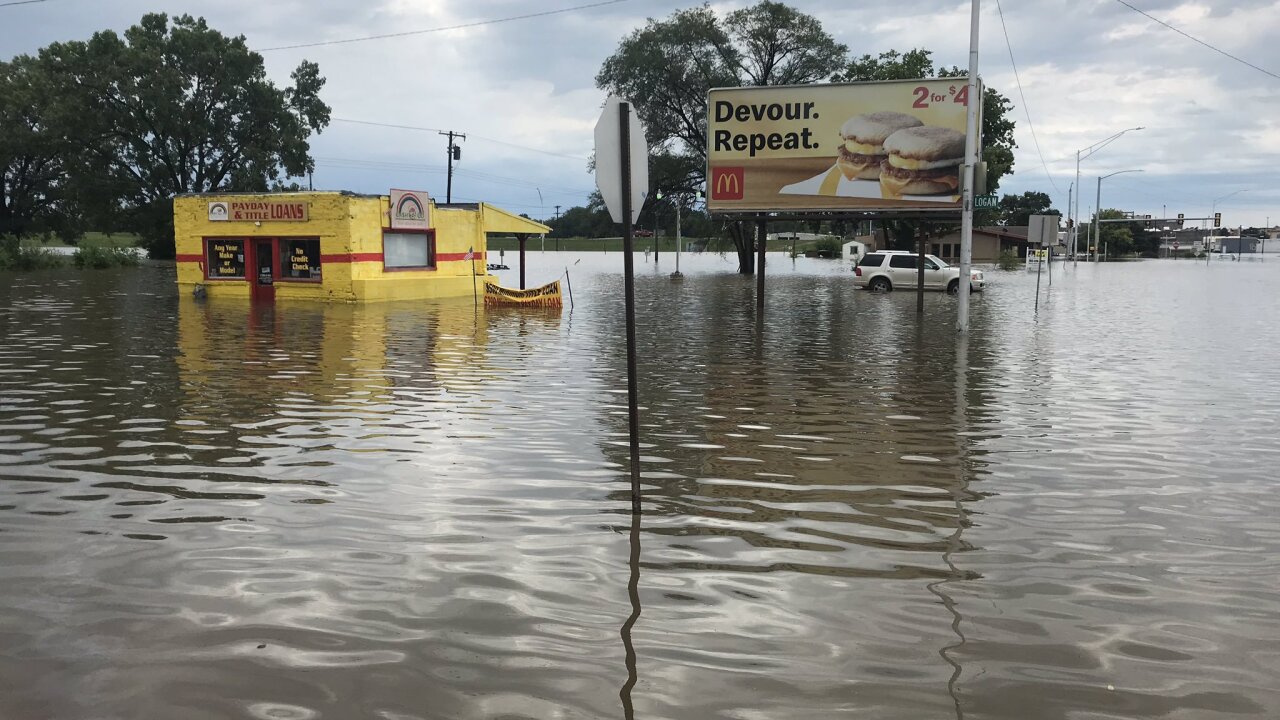 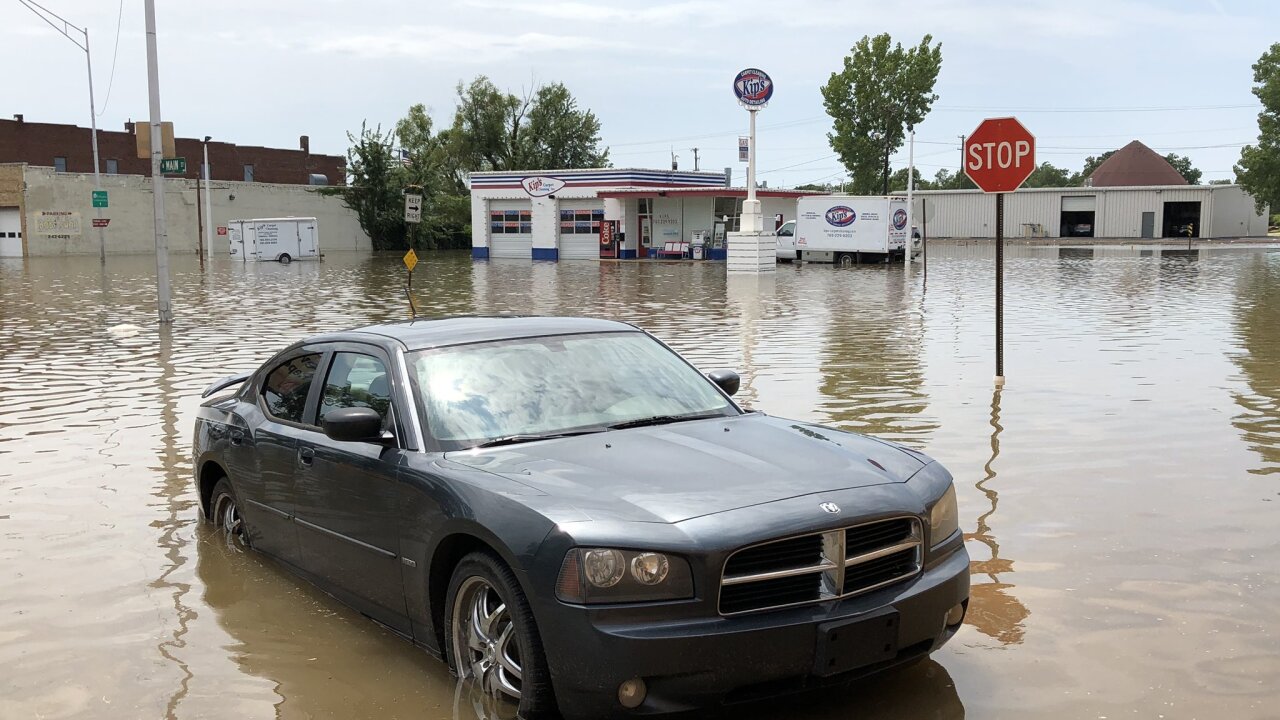 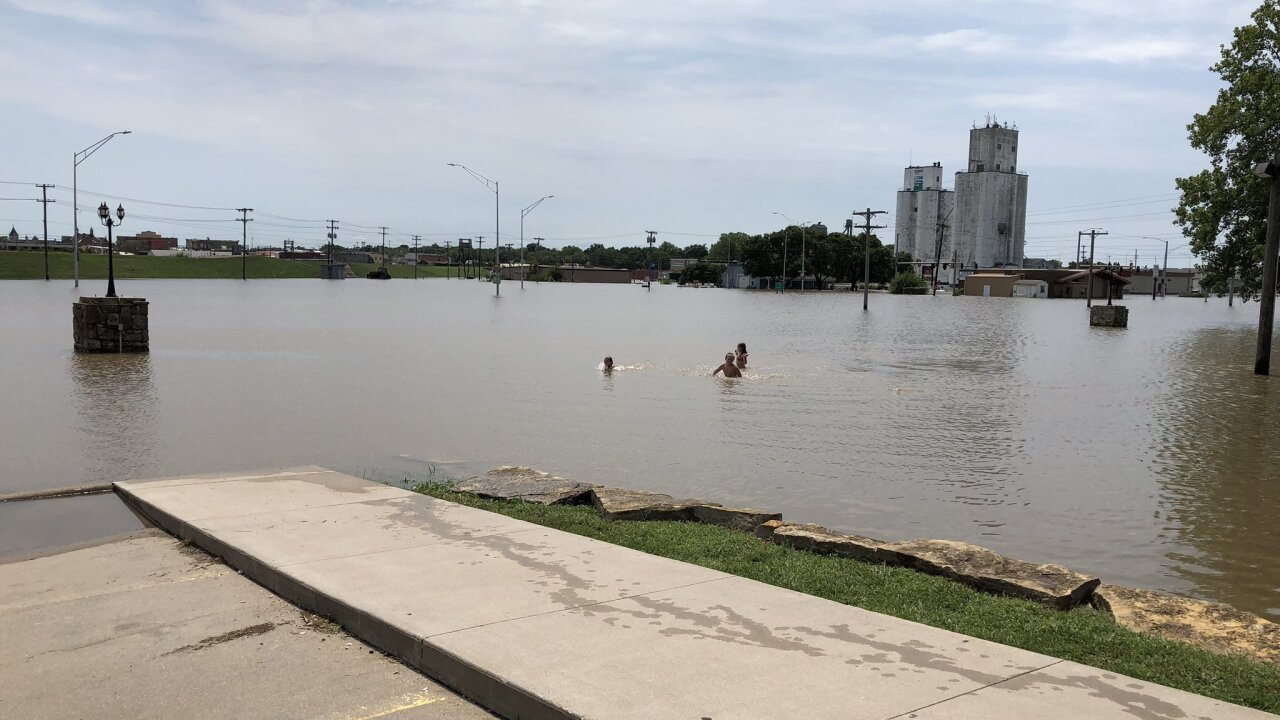 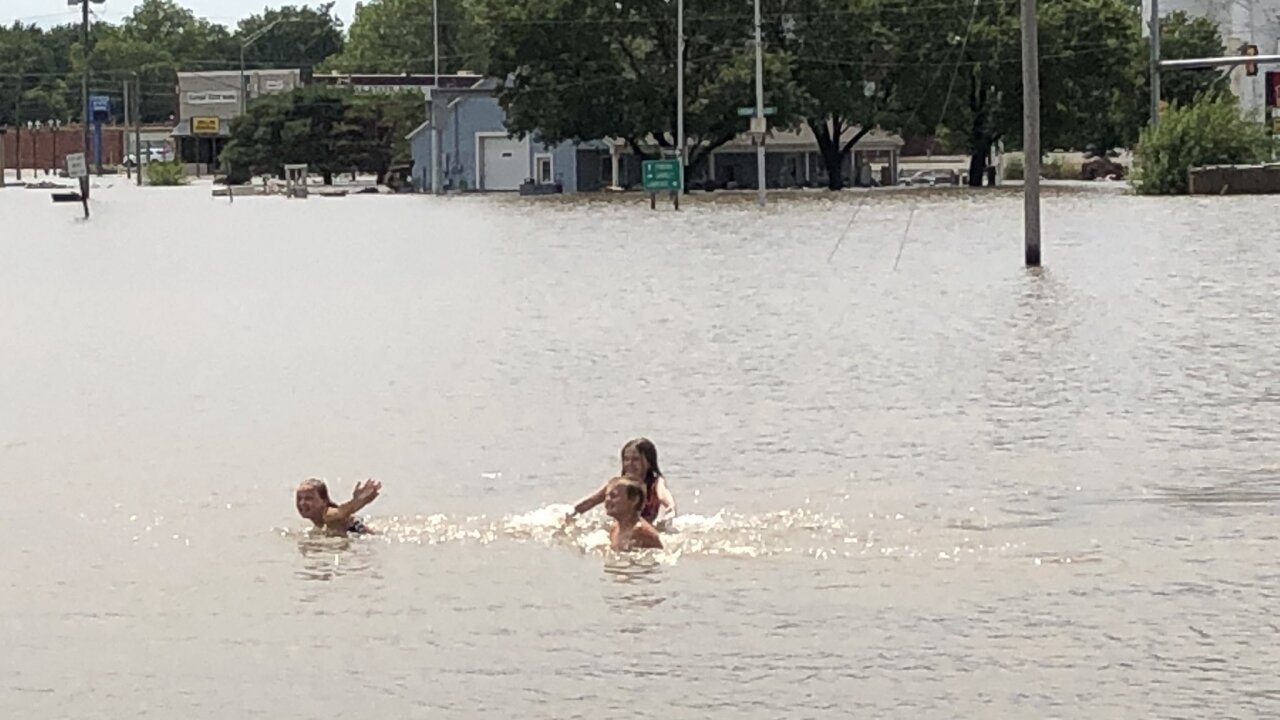 KANSAS CITY, Mo. — A round of thunderstorms dumped more than 10 inches of rain Thursday morning on parts of Douglas and Franklin counties in eastern Kansas.

Around 10 a.m., Douglas County Emergency Management said the southwest part of the county had received between 10 and 12 inches of rain.

A flash flood warning was in effect for Franklin, Jefferson, Anderson and Douglas counties in Kansas until 4:15 p.m. Thursday.

The National Weather Service warned that “extensive” flash flooding had already been reported Thursday morning in Lawrence and Ottawa.

Multiple water rescues also were reported across the area, according to the National Weather Service.

Downtown Ottawa, KS is flooded, several streets and businesses are closed down. It rained anywhere from 7-10 inches this morning. @41actionnews pic.twitter.com/Fqe1RZZSh2

The Ottawa Public Works Department said more pumps are being placed throughout the city in hopes of removing the water by tonight. City officials said 8 3/4 inches of rain came down in a short amount of time, leading to the flooding.

"I didn’t expect it to be quite like this,” Dawn Ferguson, owner Farmhouse Antiques and Vintage, said. "I was hoping it would be nothing like this."

Volunteers helped clean up, sweeping water out of the store (and onto an already flooded street) while also trying to keep merchandise dry and move it to a higher place.

"You have to understand that old things have been around for a long time and so at some point they’ve probably been touched by water or something before,” Ferguson said.

Other businesses in and around Ottawa, including Three Guys Liquor, weren't as lucky.

"About four coolers in there and a big walk-in and air conditioner, compressor all outside, and no flood insurance," owner Richard Towe said, "so we’re looking at a lot of money."

Towe hopes the water recedes quickly, so he can get in and assess the damage.

Unfortunately, several businesses said they do not have flood insurance, so repairs will come out of pocket in many circumstances.

The hopearound Ottawa is that more rain stays away, so it doesn’t compound the flooding.

The city of Lawrence announced Thursday afternoon that it was forced to shut down its Kansas River Wasterwater Treatment Plant.

The "exceptionally heavy rainfall" caused equipment at the Municipal Services and Operations Department facility to fail. The plant had to be shut down for repairs.

"Because of the equipment failure, the MSO Department is bypassing the treatment plant and diverting wastewater into the Kansas River and nearby streams," the city said in a release. "The Kansas Department of Health and Environment has been notified along with municipalities downstream."

“It went from flooded roadway to water pouring into the basement,” she said. “Mostly what was lost was furniture. We don’t have a bed. We don’t have any dressers or anything like that.”

Russell showed 41 Action News what her basement looked like hours after floodwater moved through the area, from puddles and mud on the ground to debris on the walls and ceiling. She said cleanup would take a long time.

“Right now, it’s just a matter of assessing the damage and finding what we can save and what we can’t save,” Russell said. “It’s definitely overwhelming. We’re all thankful everybody got out okay.”

Down the street from Russell’s home, the 101-year-old Lone Star Church of the Brethren also was cleaning up after water swamped its basement.

“It’s kind of unimaginable when you see it,” church member Jeff Flory said. “I walked down there and saw everything floating.”

After using a water pump for several hours to clear the basement, Flory said things could have been much worse.

“It’s just water,” he said. “We’re all still here and the building is still here.”

Across Douglas County, many roads remained impassable due to water.

Marilyn Miller, who was out cycling Thursday, said the flooding led to dangerous conditions.

“There’s water gushing out of the fields and there’s a lot of debris,” she said. “It’s been more water than we’ve had since we’ve lived here, which is about 10 years.”

According to 41 Action News Chief Meteorologist Gary Lezak, rainfall estimates from roughly three dozen thunderstorms that rolled through the area totaled 11.3 inches, while no rain fell in other locations around 40 miles away.

We just counted 35 to 40 thunderstorms that tracked over Lawrence, KS to Ottawa, KS in 12 hours. The computer estimated rainfall total reached 11.3" between these two cities. Less than 40 miles away there were only a few drops. We will go in depth tonight on @41actionnews pic.twitter.com/z6PjDWj23M