KANSAS CITY, Mo. -- It's been a long road for the Veterans Community Project.

41 Action News was there when the organization started in November 2015, with a goal of housing 30 homeless veterans in 30 tiny homes. Chris Stout is one of the three vets who started the VCP.

"We had a lot of people tell us we couldn't do it. Not going to do it. Not happening in Kansas City. Well hate to tell you there's 13 houses on the ground and another 37 more to come," he said.

January 29, the VCP officially opens its doors to 13 veterans. There are 11 men and 2 women moving into their own tiny homes on the property. One of them is Michael Koch, who before the big day shared, "I can't wait you know. I just can't wait to meet all the people. They've worked very hard."

Stout says they used YouTube to build their first tiny home in his front yard. Moving it to the property off 89th and Troost in Kansas City just 9 months later. Adding, "I think through this process and had I known back then, I'd need to surround myself with 5 times the great people I'm already surrounded with."

Most of the people working the grounds and helping build the initial homes are volunteers.

"I've slept in abandoned buildings before. To come from something like that and be standing here like this, I'm truly blessed and I'm not going back. I'm not going back," Marvin Gregory, another veteran moving in, shared. "I haven't gotten here yet but they have gave me so much hope and it's amazing. It's amazing." 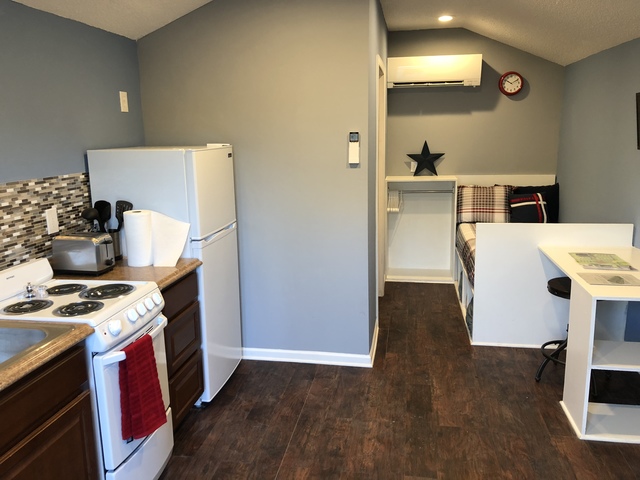 The VCP plans to put 37 more houses on the property in Kansas City. More than 500 cities have reached out to them to learn more about the project and how to replicate it where they are. The VCP has a short list of five cities it wants to expand to by the end of 2018.

Although the concept is simple, Stout explained, "Tiny houses, yea we wanted to do that. That was our idea but I think a lot of people forget the meat and potatoes of what we do is provide that wraparound service."

Stout is confident this will be a success for the VCP, but more importantly, for the veterans, they get to bring home.

"I think everybody is going to prosper there and they're going to thrive. I want to be able to see it and be there for them. Let them know this is just the beginning of a ton of great things," he said.

To volunteer, donate or learn more about the Veterans Community Project, click here.