Apps kids don't want their parents to know they're using

Tips for monitoring your kid's smartphone

KANSAS CITY, Mo. -- On average, a child receives their first cellphone at 10 years old, according to recent research.

For many parents, it's a struggle to give their child the privacy he or she needs while also giving him or her their independence.

The 41 Action News Investigators discovered potentially dangerous apps kids are using that they don't want their parents to know about.

Most smartphones are equipped with a calculator.

However, there are now several apps that appear to simply be a calculator but aren't.

In reality, the apps are secret photo vaults.

When typing "fake calculator," into the App Store, several appear.

The apps have thousands of reviews.

One person writes, "This is the best app for anyone who's either cheating or just wants to keep things from your significant other."

Another reviewer writes, "I can put nudes in with no one knowing."

In April, an employee with the Independence School District was arrested for having sexual contact with students. According to court records, the employee was storing nude photos in a fake calculator app. 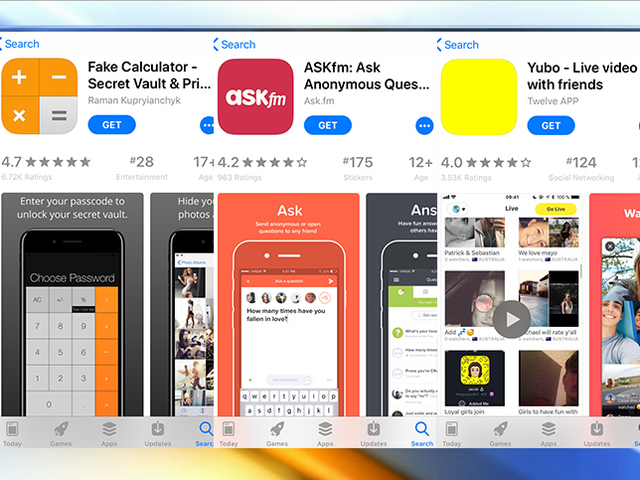 Another app that's popular among kids is ASKfm.

Basically, users ask an anonymous question and get an answer.

While it may seem harmless, the app has been linked to several cases of bullying that have resulted in suicide.

Yellow, or Yubo, is another app that could to get kids in trouble.

It's a social video app that allows people to chat with anyone and everyone.

It's compared to Tinder in the sense that it matches you to people by swiping left or right.

Protecting kids while giving them independence

He said parents with children as young as eight seek advice on monitoring their child's smartphone activity.

Chettiar suggests parents have an upfront conversation with their children before giving them a phone, which can include letting them know you'll be checking their phone at random times.

When it comes to monitoring a child, Chettiar said it's important to always be honest with the child.

"With all these restrictions, it's important to know, 'Is this violating my child's trust?' Are we fracturing our relationship as the parent with the child?" Chettiar said.

If a parent finds something concerning on their child's cellphone, Chettiar suggests speaking with their kid once they've had a chance to calm down.

Chettiar said it's important that a child knows they can approach their mom or dad if there are any issues.

"If a child doesn't feel comfortable with a parent, they're probably going to go to someone else, who is oftentimes a friend who may not have their best interest in mind," Chettiar said.

There are also apps like FamilyTime that, in part, allow parents to block apps on kids' cellphones.

Chettiar said it's also important to discuss the dangers that can come with using some of these apps with your children.

"The issues are different now. There's big risk factors. You have cyberbullying now, which didn't exist many years ago," Chettiar said. "It's hard to be a parent, but it's also hard for kids these days."