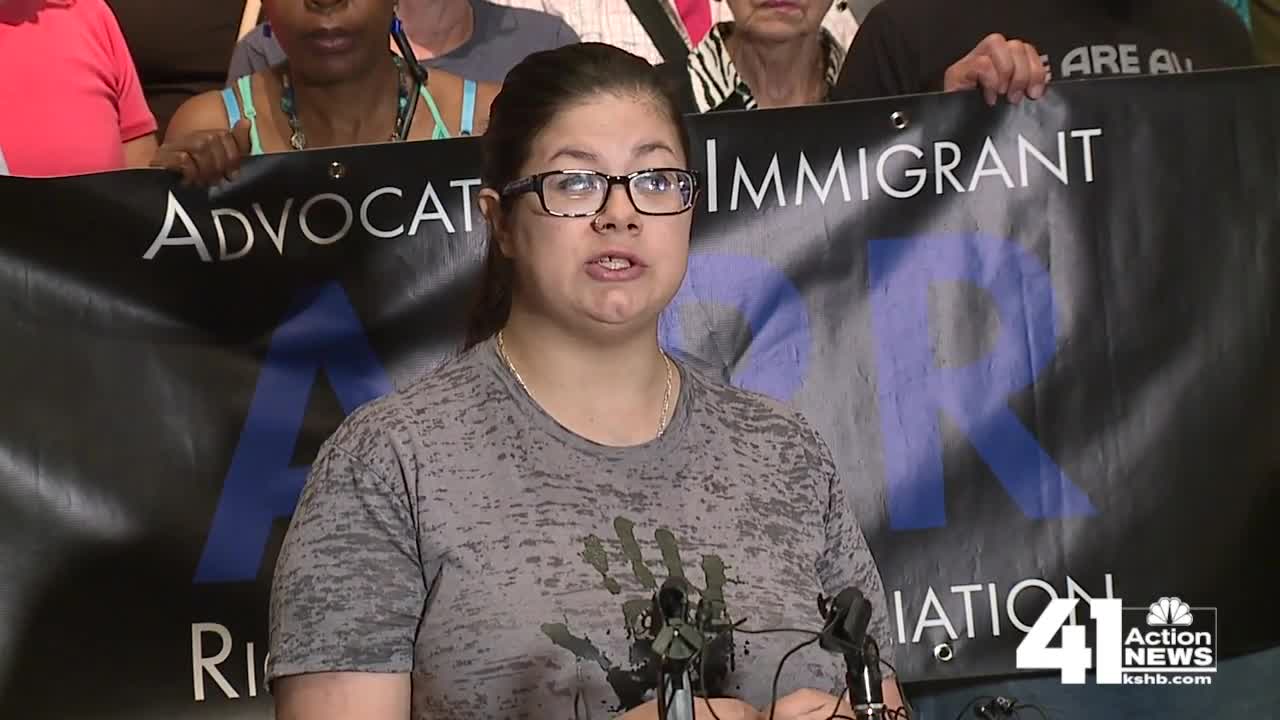 An arrest made by Immigration and Customs Enforcement (ICE) agents Monday in Kansas City, Missouri, is raising questions and concerns from rights groups and lawmakers alike. In a Facebook Live video that by Tuesday morning had been viewed more than 20,000 times, Cheyenne Hoyt streamed the arrest of her partner, identified as Florencio Millan-Vazquez, 32. 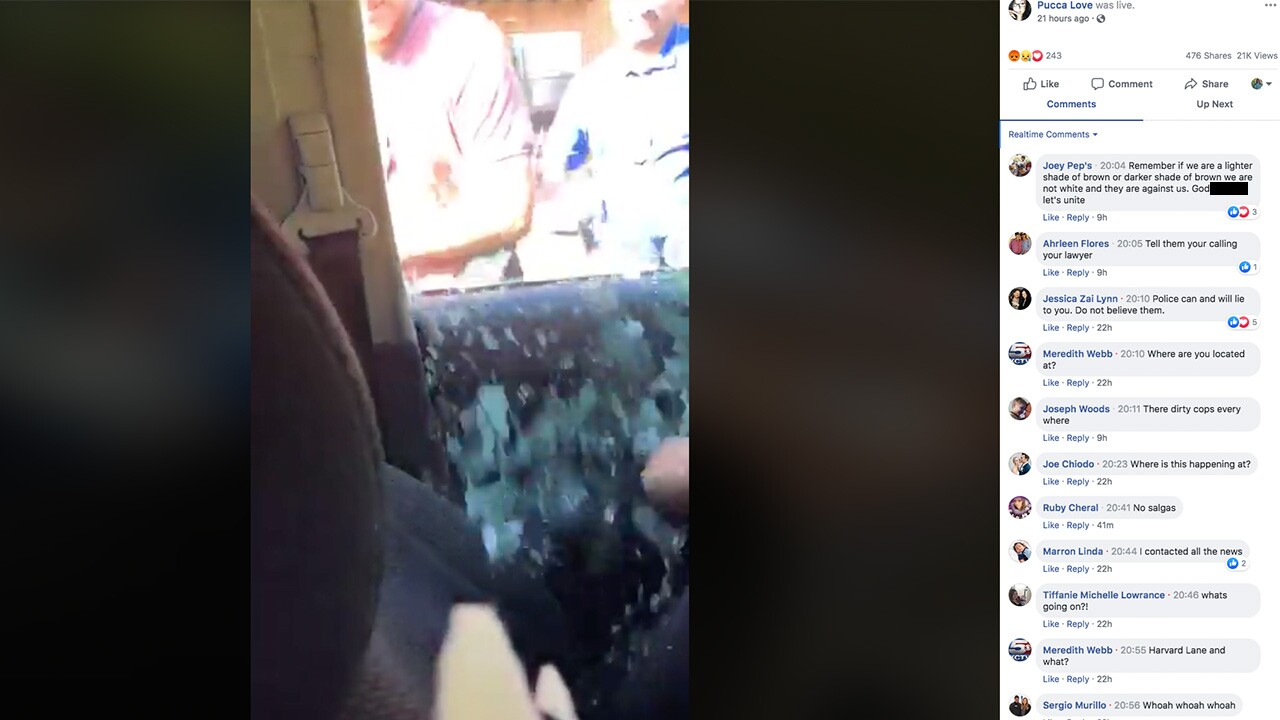 KANSAS CITY, Mo. — An arrest made by Immigration and Customs Enforcement (ICE) agents Monday in Kansas City, Missouri, is raising questions and concerns from rights groups and lawmakers alike.

In a Facebook Live video that by Tuesday morning had been viewed more than 20,000 times, Cheyenne Hoyt streamed the arrest of her partner, identified as Florencio Millan-Vazquez, 32.

Millan and Hoyt have two children, a 7-month-old and 11-year-old, who were in the car at the time of the arrest.

The family was getting ready to go to a doctor’s appointment for the baby, Hoyt said in the video, when ICE agents in Jeeps and plain clothes boxed their car in and approached the vehicle.

Hoyt and Millan can be heard repeatedly asking to see a warrant for his arrest in the video.

Hoyt said the agents told her they had a “paperless warrant” and asked Millan again to get out of the car. In the video, the agents are heard saying they don't need a warrant to arrest him.

Under the law, ICE agents can arrest people without a warrant if they believe the person is going to escape before they can obtain a warrant. It was not clear if that was the case in this incident.

ICE called Kansas City police for assistance. Officers spoke with Millan, asking him questions and trying to convince him to get out of the car.

Police spokesman Sgt. Jake Becchina told 41 Action News that KCPD will “from time to time” help “other local, county, state or federal agencies” which “may be conducting enforcement activity in Kansas City and find themselves in need of assistance.”

Regarding the July 22 U.S. Immigration and Customs Enforcement (ICE) stop that was filmed and shared on Facebook live: This action was initiated by ICE and not by the Kansas City Missouri Police Department. ICE agents had requested help from KCPD officers. Our role was only to observe and assist if necessary. KCPD officers did not break the vehicle’s window, did not remove the driver and did not transport him to any KCPD facility.

We regularly respond to requests for assistance from federal, state and local law enforcement agencies that are working in Kansas City, Mo. We will continue to provide this assistance, not only for the safety of the other law enforcement members but also for the community. Our officers know our city and the people who live here best and can provide valuable information and assistance to both outside officers/agents and community members. Keeping the peace is our top priority.

After repeated threats to do so, an ICE agent can be seen breaking the car window about 20 minutes into the video.

Agents placed Millan in handcuffs and into one of the ICE vehicles.

During their father’s arrest, the children can be heard whimpering and crying in the back seat. The oldest cried, saying he didn't want them to take his dad away.

“No, right now we’re being extremely nice to you, but what you just put us through, what we had to go through — you’re lucky that I’m letting you talk to her right now,” the agent can be heard saying.

ICE agents in the video said one of them was injured while breaking the window.

ICE released a statement later Tuesday morning stating Millan was an immigration fugitive at the time of his arrest. Spokesman Shawn Neudauer also said Millan has a prior criminal history of misdemeanor offenses.

In 2011, Millan returned to Mexico under a voluntary departure order, but came back to the U.S. five days later under a different name. He was then deported.

The ICE statement says Millan was "uncooperative" and “officers were left with no other choice than to make the arrest by physically removing him from the vehicle."

U.S. Rep. Emanuel Cleaver of Missouri said the video was “very concerning as to the traumatization of children and the reasonable use of force.”

Cleaver said he had reached out to everyone involved to learn more about the circumstances surrounding the arrest. His full statement is below.

Kansas City Mayor Sly James also reacted to the arrest, tweeting "this issue is about politics and the hate-filled ideologies of the current administration in Washington."

And we must continue to stand together to demand equal justice under the law for all our residents, no matter where we come from or how we got here. 3/3

A statement from More2 and Advocates for Immigrants Rights and Reconciliation (AIRR) reads, “The unmarked Jeeps/ plain clothes officers from Immigration and Customs Enforcement, references to a ‘paperless warrant,’ and their assistance directly from the Kansas City Police Department were issues of concern to advocates. The KCPD has expressly stated that as policy they do not assist ICE yet, they participated in attempts to break out the window of the family’s car, as seen on the video.”

Becchina told 41 Action News the sergeant who was at the scene “assured me that it was the ICE agent that broke the window.”

As of late Tuesday afternoon, more than $5,000 had been raised for the family through Facebook.

Read the full statement from Cleaver below:

"As a father and grandfather, seeing the footage of Florencio being dragged out of a car in front of his horrified children and partner is nothing short of heartbreaking and gut-wrenching. It should make every American question where we’re headed as a nation and what kind of people we want to be. This President has spent the entirety of his term demonizing immigrants and fearmongering his base into relinquishing the very values that have made our nation what it is today, and this incident is a direct result of that rhetoric.

There is no debate that the apprehended individual broke the law, but the law itself is more than broken, and the President’s policies are exacerbating the problem. These policies are causing communities to be terrorized, families to be terrified, and American children to be traumatized—trauma that will undoubtedly live with them forever. The Administration has purposely allocated resources in order to further clog the system and enacted enforcement policies to maximize the harm to families. United States Citizenship and Immigration Services (USCIS) backlogs are at unprecedented levels, affecting naturalization and citizenship applications, work and student visas and humanitarian-based visas. The time has come for both parties in Congress to come together and legislate comprehensive immigration reform that reflects our values of acceptance, compassion, and all people being created equal under God. Were it not for some uncompromising House Republicans, this would have been done years ago under the Obama administration when such legislation was passed overwhelmingly in the Senate, but never given the opportunity for a vote in the House. It makes one question whether Republicans truly want to fix our immigration woes, or simply use it as a political cudgel to further divide an already dangerously divided nation.

My heart goes out to the family in question, and I’m deeply troubled that this continues to happen in my district and communities across the country. My office has already reached out to the regional ICE office, and I will continue to monitor the situation. However, the solution to ensure this never happens to another family is true, bipartisan, comprehensive immigration reform. As long as I’m here in Congress, I’ll be at the table ready to make that happen."