The focus of nearly all of his paintings are on his hometown teams and favorite athletes.

"I like the dynamic pose or that capturing of that moment right before they've either done something or they're getting ready to," said Oropeza.

His work took off alongside the Kansas City Royals. Shifting to football season and the Chiefs, Oropeza's focus has been on Patrick Mahomes. His second Chiefs piece in nearly five years features the star QB. 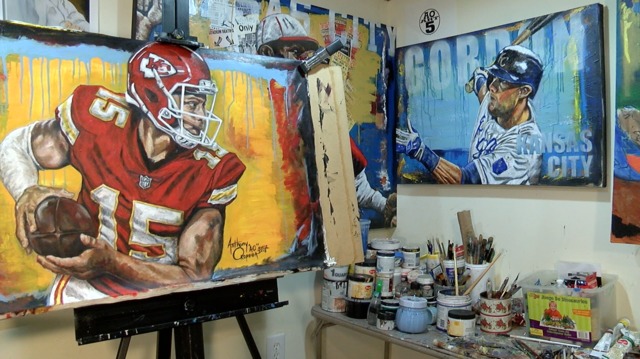 The Mahomes piece was also featured in the New York Times.

At times, Oropeza wanted to give up painting. He said he never thought he'd make the cut and wasn't making the money he needed to make ends meet. In the beginning, he was selling his work for a couple hundred dollars. Now, the price for a piece like 'The Mahomes,' is in the thousands.

As the Chiefs continue on their high, Oropeza hopes his career does the same. In the future, he hopes to be featured in galleries across the country, but also inside Arrowhead Stadium.