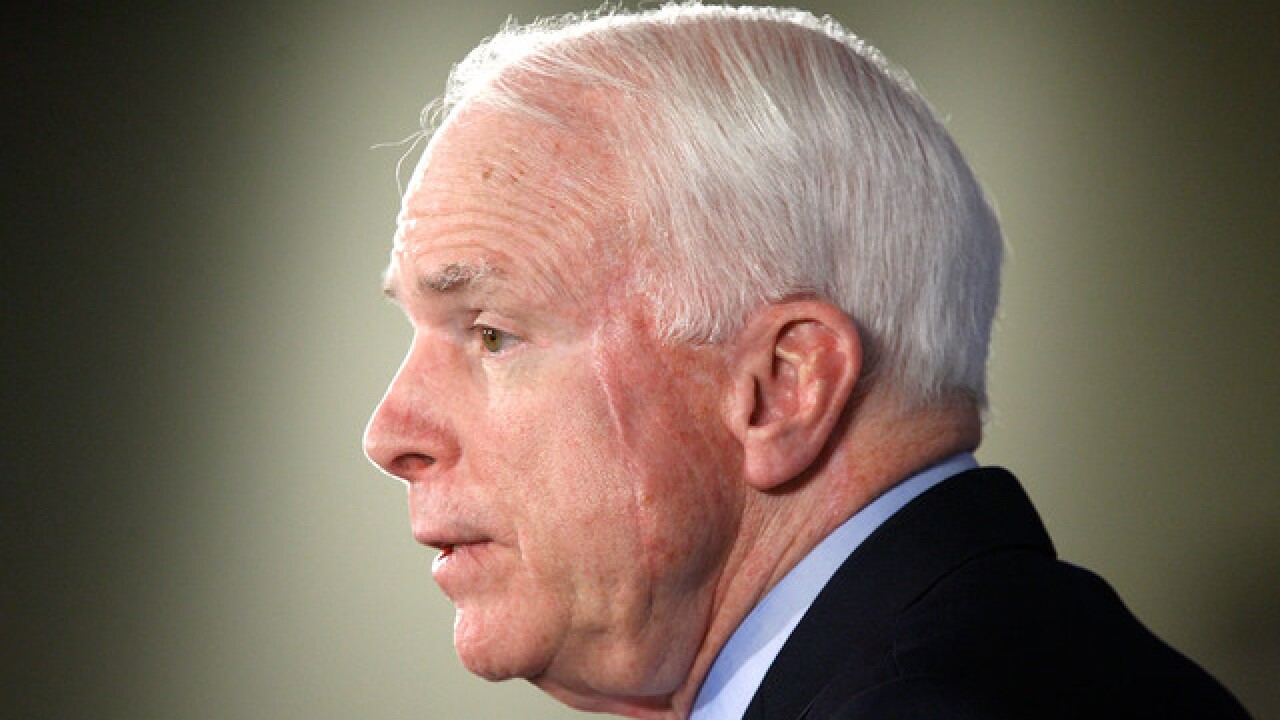 KANSAS CITY, Mo. — Local leaders from both sides of the political aisle are paying their respect after Sen. John McCain, an Arizona Republican, died after a yearlong battle with brain cancer.

McCain — a Vietnam War veteran, former prisoner of war, and 30-year-Arizona senator — leaves behind his wife, Cindy, and seven children.

Each of his fellow senators from Missouri and Kansas weighed in Saturday night:

As I served with John McCain he became one of my heroes. We didn’t always agree but he was always motivated to do what he thought was the right thing.

I feel so fortunate that I had a chance to learn from him and laugh with him. He was a tremendous role model for our democracy and gave his life to the public good. My love to the McCain family.There’ll never be another like #JohnMcCain.

Godspeed to my friend @SenJohnMcCain, who leaves behind a profound legacy of courage and conviction. Robba and I are praying for the McCain family and we thank them for sharing John with us for so many years.

@SenJohnMcCain was a friend. He was a patriot, a hero and a leader. He never shied away from a battle, from what was right and what was best for our country. Godspeed John. Thank you for a lifetime of service. Franki and I are praying for his family and friends.

Moran also released a much more thorough statement in an email to 41 Action News:

“John McCain was a true American hero, whose sense of duty to our nation led to a lifetime of dedicated public service. First as a naval aviator serving in Vietnam, his honor led him to refuse early release ahead of his fellow American POWs. Then as a member of Congress and presidential candidate, John remained steadfast in his principles, always seeking to do what he thought was in our nation’s best interest. There has been no better advocate for our servicemembers and veterans than John and it was an honor to work closely with him on achieving the most significant VA reform Congress has passed in decades with the VA MISSION Act. This could not have been possible without his leadership and knowledge, and it was fitting that the bill was named after him.

“John was a friend and an example to me and many others. He leaves behind a legacy of courage and conviction – I hope we all can reflect on these values as we work together to heal and advance America. Robba and I are praying for John’s wife, Cindy, their children and grandchildren, as well as John’s mother, and we thank them for sharing John with us for so many years.”

A true patriot that exemplified everything that is great about America. Rest In Peace. https://t.co/urP4MWZxsa

John McCain will forever be remembered as an American hero and defender of all that our great nation stands for. Thank you for your service.

Among other local politicians to offer their thoughts, McCaskill's opponent in the upcoming U.S. Senate race in Missouri, state Attorney General Josh Hawley, also tweeted a statement after McCain's death:

America has lost a great man and war hero. @SenJohnMcCain and his family are in our thoughts and prayers.

The Governors from both Kansas and Missouri also released statements Saturday, honoring McCain.

Saddened to hear about the passing of a great veteran and public servant Senator John McCain. Our prayers are with his family. pic.twitter.com/QSChhIS3f2

But only one of the three candidates for Kansas governor in the November general election, independent Greg Orman, issued a similar statement. It read:

"Sybil and I were saddened to hear the news of Senator John McCain’s passing. Our hearts go out to the McCain family — our thoughts and our prayers are with them. Tonight, the United States mourns the loss of a great American patriot and hero."