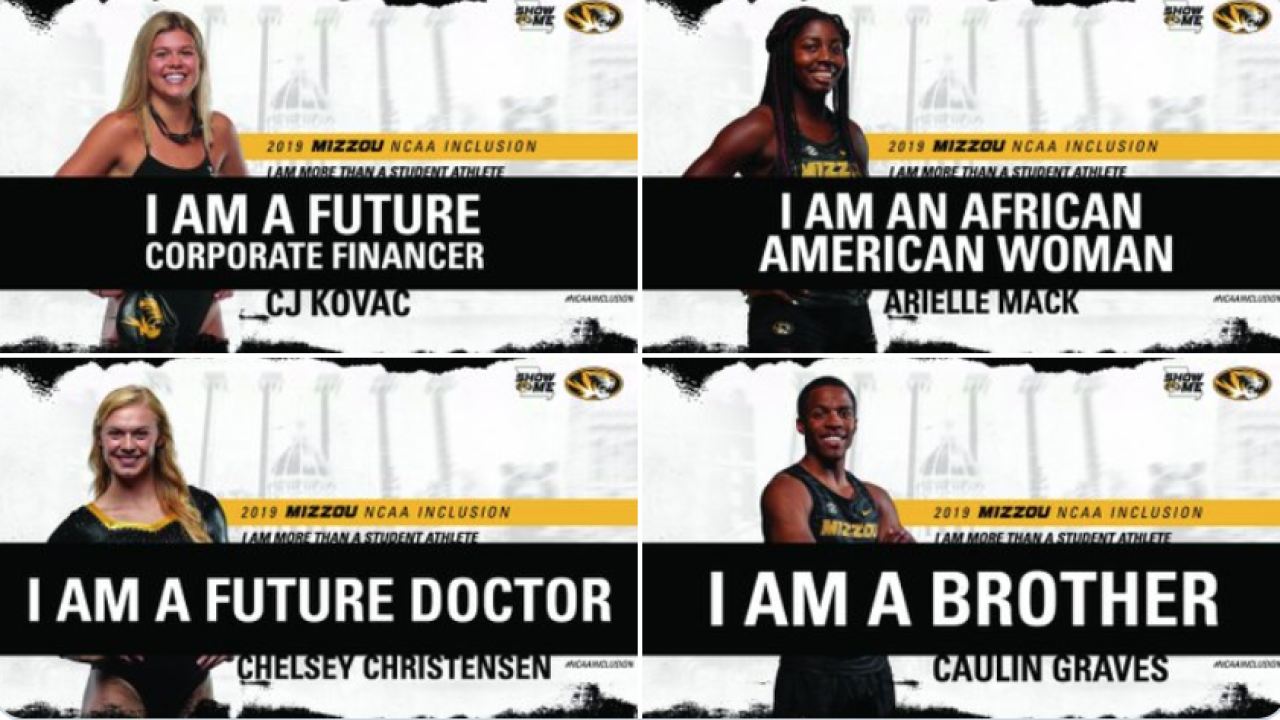 Copyright 2019 Scripps Media, Inc. All rights reserved. This material may not be published, broadcast, rewritten, or redistributed.
Mizzou Athletics
The University of Missouri athletic department has apologized and taken down a tweet intended to promote the NCAA&#39;s &quot;diversity and inclusion week&quot; after receiving complaints that it was racially insensitive.

COLUMBIA, Mo. — The University of Missouri athletic department has apologized and taken down a tweet intended to promote the NCAA's "diversity and inclusion week" after receiving complaints that it was racially insensitive.

The original post, which prompted a quick reaction on social media, showed a graphic with four photos under the words "I am." At issue is that the white athletes described career aspirations in the graphic, while the black athlete and staff member made statements about race.

Come on Mizzou, tears at the last one pic.twitter.com/X4j4cTiXlj

Arielle Mack, a black freshman track athlete, was pictured with the statement "I am an African American woman." Chad Jones-Hicks, a black ticket office assistant, according to MU Athletics' website, was accompanied by the statement "I value equality." Meanwhile, the caption for Chelsey Christensen, a white gymnast and junior at MU, read, "I am a future doctor." Another caption attributed to freshman swimmer CJ Kovac, also white, said, "I am a future corporate financer," with the word financier spelled wrong in the graphic.

In a separate post, a black male student athlete is pictured with the caption: "I am a Brother."

The athletic department said in a statement that the "intent was to provide personal information about our students, but we failed." The statement said a video it posted better represented the school's "intent to celebrate our diversity."

Earlier we made a mistake when we posted a graphic about our student athletes. We apologize. Our intent was to provide personal information about our students, but we failed. We listened and removed the post. This video better represents our intent to celebrate our diversity. pic.twitter.com/dVZjrLZ254

That video contained an extended quote from Mack, who said, "I am an African American woman, a sister, a daughter, a volunteer and a future physical therapist." She told the Columbia Missourian that she didn't think too much of the tweet, as MU Athletics used her own language. She also said the department did the right thing by deleting the tweet in light of the controversy.

Former Missouri standout quarterback Corby Jones, a Kansas City attorney who is black, told The Kansas City Star's editorial board that his first reaction was outrage. He said he was left asking, "Why did we choose those words for those (African American) individuals?

After calls to athletic department administrators, Jones came away with a better understanding of the university's intent. The post was part of a broader NCAA-led inclusion initiative.

The controversy comes four years after hundreds of students protested the way university leadership handled complaints from black student groups about racial slurs and other slights on the overwhelmingly white flagship campus.