KANSAS CITY, Mo. -- Sherry Bumgardner spends a lot of time either waiting for the bus or riding it.

"My longest ride was three and a half hours," Bumgardner said.

On a recent rainy Wednesday morning, she rested on a walker inside her garage, keeping an eye out for the bus that was supposed to come between 10:45 and 11:15 a.m. Minutes passed with no bus.

As she waited, Bumgardner called Kansas City Area Transportation Authority's dispatch. Then she called her brother.

"The dispatcher told her that the driver got out of the bus, came and knocked on her door, and she was a no-show. Which is what she gets told very frequently," Rick Bumgardner told 41 Action News later.

But 41 Action News crews were there, and no bus ever came down Bumgardner's Raytown street until 11:47 a.m., when one finally pulled up to take her to work. She was 25 minutes late.

"This last week, three days of that, I was late. That comes out of my paycheck," she said.

Bumgardner relies on what's known as paratransit, a service mandated by federal law to help people with disabilities get around. The KCATA used to call it Share-a-Fare, but the agency recently renamed the program RideKC Freedom.

For those using it, patience is a requirement. 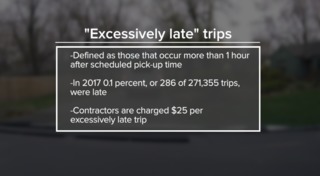 "Monday through Friday, my life is controlled by me getting to work and getting home. I mean some days I get home before 5, some days it's after 6. Some days it's almost 7 when I get home," Daniel Jones, who is visually impaired, said.

Jones spends 12 to 13 hours of his day getting to the office, working, and coming home.

"And I'm not anyone special. They do that to everyone," he laughed and said.

"We spend the majority of our life just getting to and from where we want to go, and it's stressful, you know," Chris Montavon, who also uses the service to get to work, said.

The KCATA said it has measures in place to penalize contractors for late trips. “Excessively late” trips are defined as those that occur more than an hour after the scheduled pick-up time.

In addition, the KCATA said that figure has never exceeded 0.5 percent of trips.

41 Action News heard from many others with complaints:

"Where does the buck stop? How high do we have to go? Who has to be made aware?" asked Leah Aviel, a frustrated rider tired of encountering the same problems. 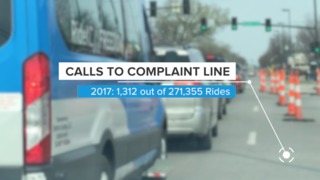 Through a records request, 41 Action News learned that in 2017 there were 1,312 complaints made about RideKC Freedom through the phone line. The service completed 271,355 rides in 2017.

But some passengers said the number doesn't reflect how many people are actually having problems.

Many said they stopped calling because no one responded.

"I don't know. My personal opinion is that they just really don't care," Jones said.

"This becomes emotional for me because I am someone with a 'diversability,' and so for somebody to say that we don't care, I take that very personally as if I don't care, and nothing can be further from the truth," he said.

Nearly six years ago, Makinen lost his vision and was thrust into the world of paratransit.

"I've been in those situations, and it's not only frustrating, it's terrifying," he said.

These paratransit problems are not unique to Kansas City. Nationwide, agencies grapple with providing the expensive service and retaining drivers for one of the most difficult jobs in transportation.

In 2017, the KCATA spent $10.7 million on RideKC Freedom. The expenditure represents roughly 11 percent of the agency's overall budget.

Makinen's solution was to create an app called RideKC Freedom On-Demand. It's a rideshare service like Uber or Lyft, allowing passengers to request rides instantly instead of having to schedule them a day in advance. It's the first program of its kind in the nation for paratransit and retail customers.

But the riders we spoke with said it’s not an option for them because of the cost. It’s $5 for the first five miles, then $2 for each mile after. RideKC Freedom costs $3 a trip. Priced-out passengers feel like they’re out of options.

Because of the complaints 41 Action News brought to light, the KCATA is adding a staff member to address passenger concerns.

“While KCATA strives to deliver an exceptional customer experience each and every day, we do get complaints. And as one complaint is one too many, we will continue to focus on service quality and accountability. We are also augmenting our existing efforts by adding a community liaison to our staff; implementing new methods for receiving customer feedback; and will continue to monitor service quality for improvement opportunities.”

Makinen also said the KCATA is reviewing data from its pilot year of RideKC Freedom On-Demand to determine areas for improvement.

“We have to come up with a solution, and I think we’re darn close. We just need to get it over the finish line,” Makinen said.

One of those solutions was created by riders. Called Disability Advocates for Transportation Accountability, the Facebook group gives riders a chance to share their experiences.

Listen to their experiences below: