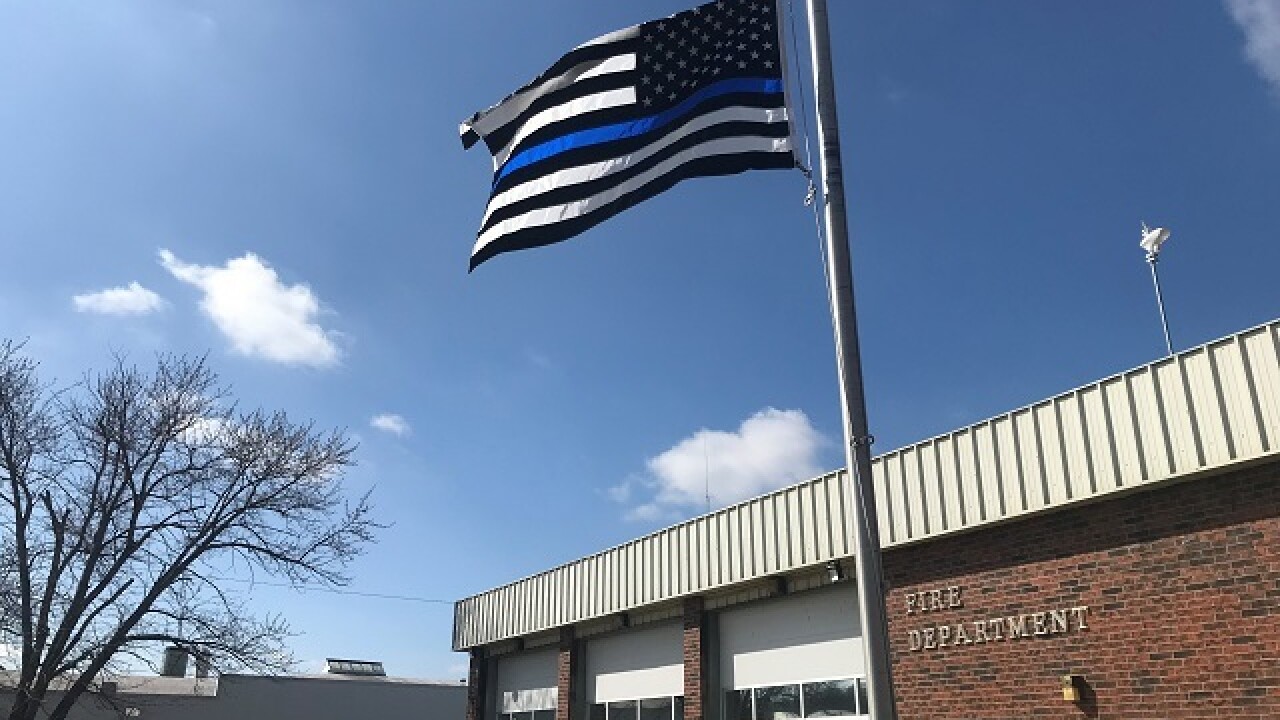 Copyright 2018 Scripps Media, Inc. All rights reserved. This material may not be published, broadcast, rewritten, or redistributed.
<p>A flag outside the Clinton, Mo. Fire Department at half staff Wednesday morning following the death of Officer Christopher Morton. Photo by Steven Dial/KSHB</p>

CLINTON, Mo. – Seven months to the day, people living in Clinton are reliving a nightmare after hearing another police officer was shot and killed.

In August of 2017 Clinton Police Officer Gary Michael was shot and killed during a traffic stop.

After Michael was killed, this already tight-knit community grew closer.

30-year-old Morton was shot and killed, two other officers were injured.

"If someone will kill a cop they will kill anyone,” Clinton resident Amanda Gray said. “It is devastating to the town. It’s sad. I feel bad for everyone involved.”

A town in shock - People living in Clinton woke up to the news that another officer was killed. 7 months ago, Gary Michael lost his life. Last night Christopher Morton was killed, two other officers were shot. @41actionnews #ClintonPD pic.twitter.com/39TlNIq3mq

"It’s a travesty, you want it to stop,” resident Peggy Garber said. “I want to blame guns, but you gotta blame people because they are the ones behind the guns.”

For many living in Clinton, they woke up on Wednesday in shock hearing that another officer was killed.

"That just doesn't happen in our little town,” resident Rick Collins said. “Gary Michael was the first one we lost, now another one, I don’t know what to think about it.”

Morton also served in the military. He deployed to Kosovo and Afghanistan. He was recognized by the Kansas City Royals in a 2014 video for his service.

“He had the unique ability to see the humor and the lighter side of things without losing focus on the seriousness. [He was] absolutely a hard worker, quick to volunteer for things and eager to learn,” said Sgt. Major Retried Chris Jewett, who served with Morton in Kosovo.

Seven months ago, the community wrapped their arms around the Michael family. The town will now have to support Morton's family.

“It’s hard to think that seven months ago we were in the same situation again and seven months to the day we would be back in this position again. It’s heartbreaking,” Scott Brooks, owner of the Clinton Flower Shop said.

Brooks placed a wreath outside the Clinton Police Department hours after Morton passed away.

Brooks told us the 30-year-old army veteran would stop into his shop every now and then.

“He came in for different things and, you know, wasn’t you know necessarily the serious type. He always had a smile whenever he would come through,” Brooks said.

On Wednesday morning, locals walked in to place their orders to memorialize the fallen officer, but others were phoned in from hundreds of miles away.

“We got the call from the florist in The Bronx the same one that called seven months ago with the order for the New York Yankees they told us last time but the New York Yankees does this to every department in a country that has an officer has been killed in the line of duty,” Brooks said.

“What we’ve done as a team and trained for we want to be here to help these agencies who — it’s a family loss for them,” Les Kerr, the team’s leader told 41 Action News.

In coming days, Kerr’s organization will coordinate with other law enforcement agencies to help Clinton PD cover shifts and will make sure officer Morton is properly honored.

“Through the ages, the people who protect us go by different names. In one era, they are called warriors. In another, knights.

In our era, the people who walk our streets and defend the defenseless are given an honored name: they are called police officers.

Today, in the state of Missouri, we lost one of our police officers. He was a thirty-year-old gentleman whose name was Ryan Morton. Officer Morton was a member of the Clinton Police Department, and late last night, he was shot and killed in the line of duty.

All of us can stop today and pray for him and his blessed memory. We can think about his family, and we can, for a moment, share in their grief. And these are good and right things, and we should do them.

Officer Morton took Officer Michael’s post in the department. Those two warriors are together now, in the company of God, who has brought his sons home.

We are blessed to live in a time and place with men and women of the character and quality of Officer Morton and Officer Michael. And it’s because they are men and women of such strength and wisdom and love that we feel such grief when they leave us.

We mourn our servants today. We bless their memory. We honor their families. And we will—we must—do everything in our power to stand by this department and community in their grief.

God bless every single police officer in the state of Missouri and around the country. God bless you, and your families, and the communities you call home.”