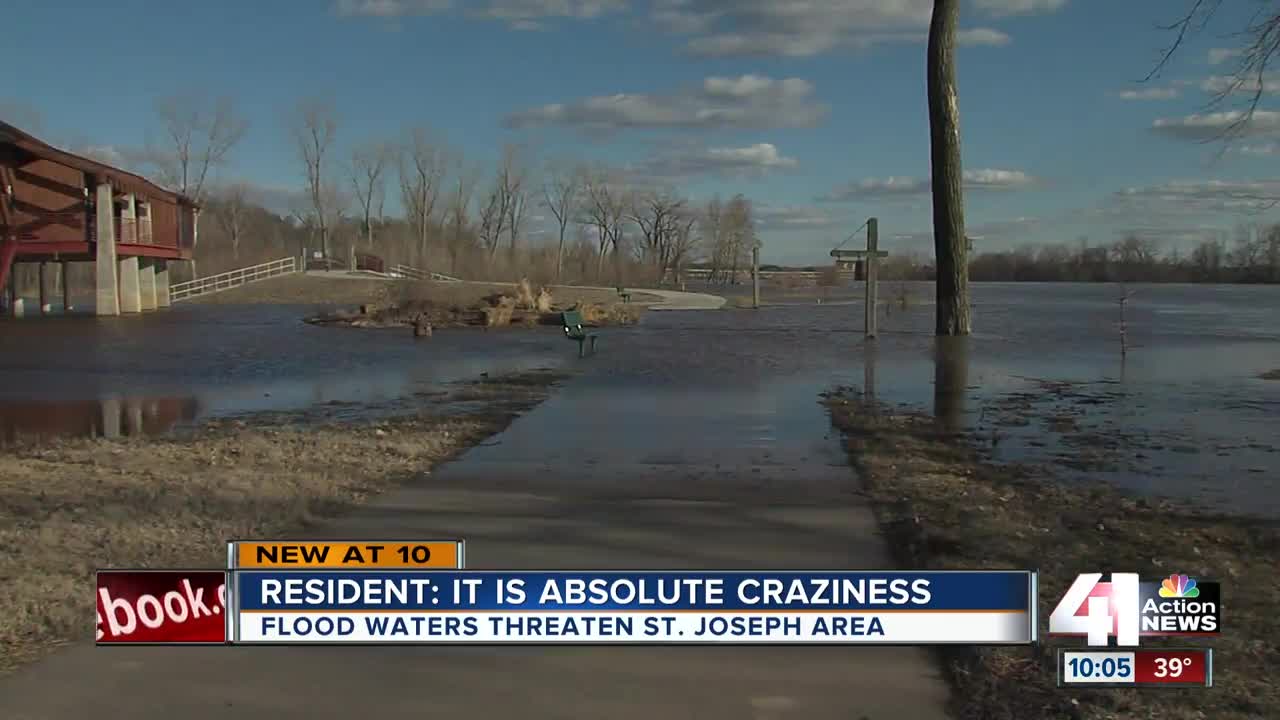 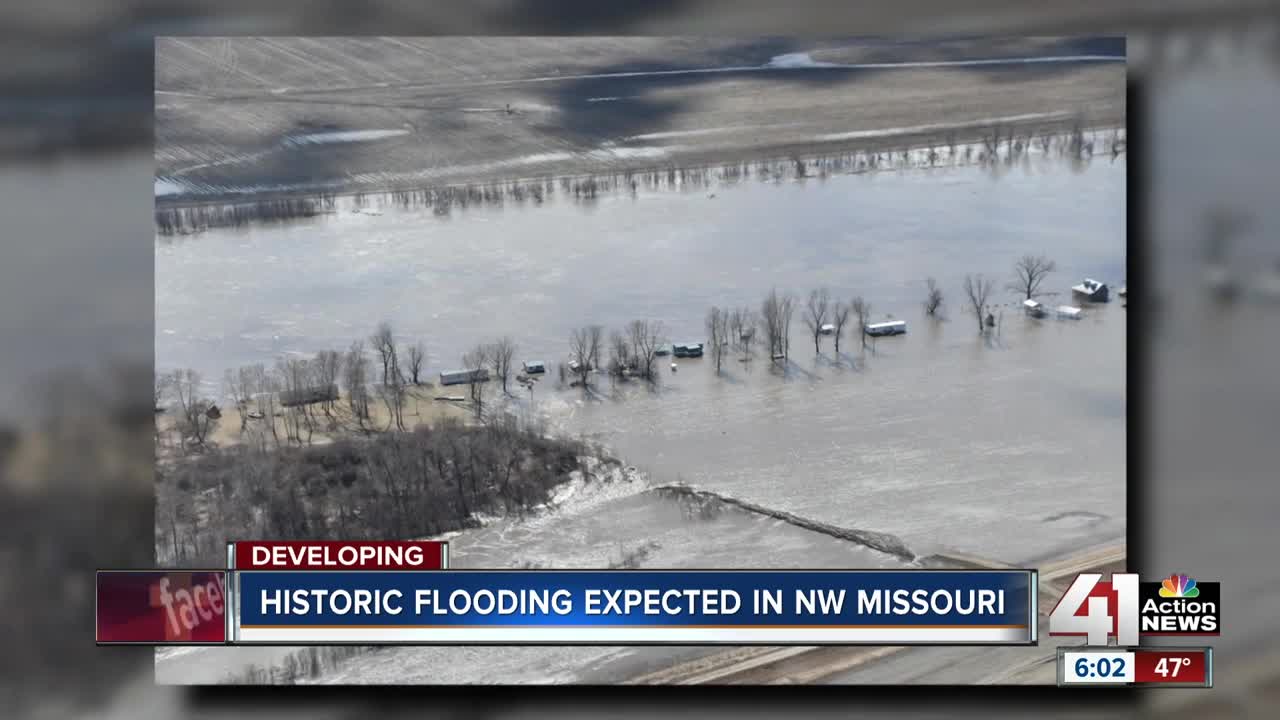 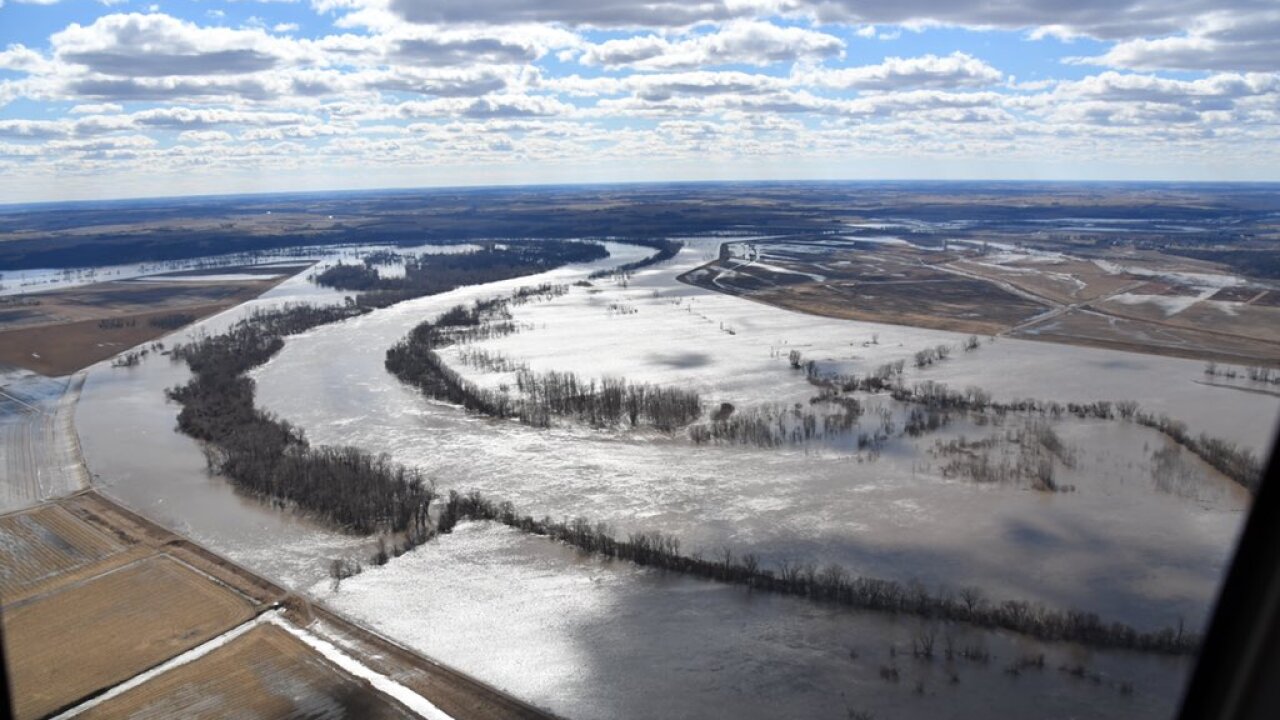 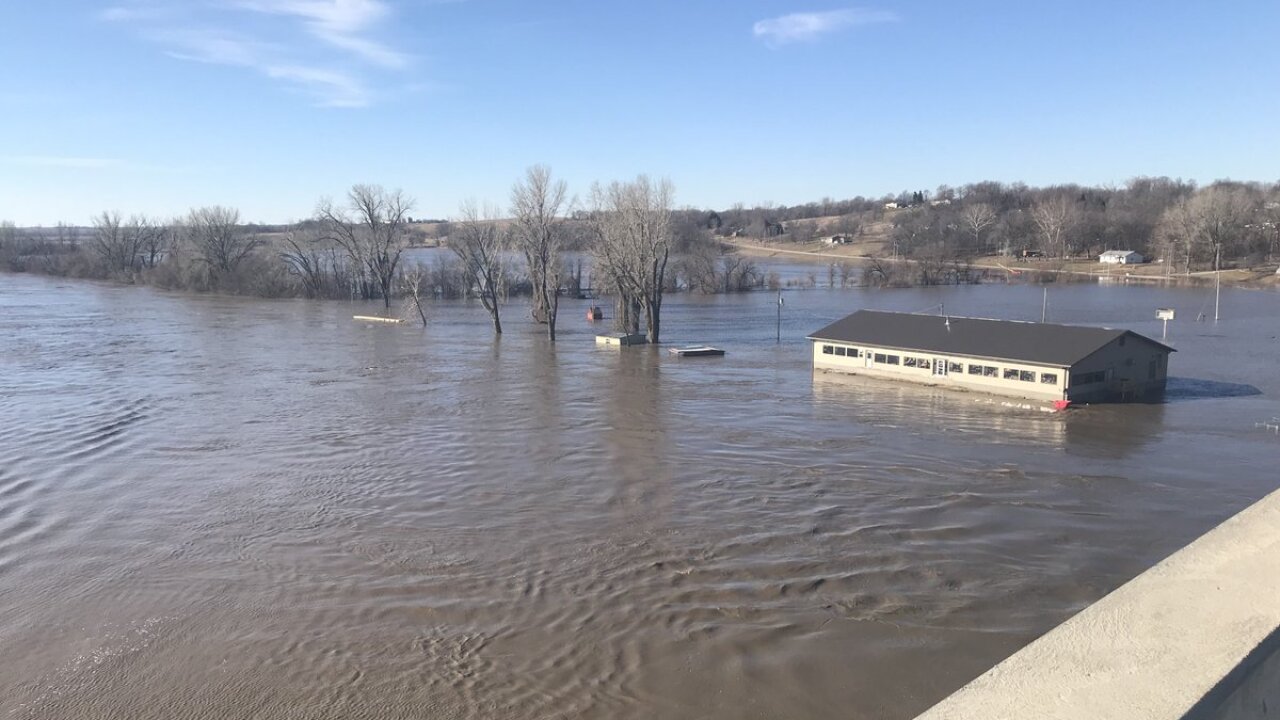 Following an aerial tour of northwest Missouri, Parson said Friday that Missourians in the area should be prepared for a "dramatic rise" in the river in the coming days.

Officials are planning detours for traffic along portions of Interstate 29 that are closed near Rock Port due to flooding.

Leaders monitoring the incident say that some levees are deteriorating and that some may be breached soon.

More than 140,000 farm acres are anticipated to be affected by the flooding.

The rising waters along the Missouri River brought out onlookers on Friday near St. Jo Frontier Casino, where water had overtaken a walking trail and surrounded a nearby nature center.

“It’s crazy. It is absolute craziness,” Nicole Clark, who lives in St. Joseph, said. “I was here in 2011 and saw it when it was all the way up when the casino flooded. This is crazy.”

Across the river in Elwood, Kansas, preparations to deal with possible flooding continued on into the evening as Dennis Muse unloaded sand piles and sandbags near a neighborhood to protect against the conditions.

“If the water comes up high enough, this is just a preventative measure,” he said. “We went through this in 2011 and went through it in ’93. You just roll with it.”

The Missouri State Highway Patrol will have equipment and swift water rescue teams on standby as flooding continues.

3:15 p.m. | The Kansas Highway Patrol's Air Support Unit has been deployed to help monitor flooding conditions on the Kansas side of the Missouri River.

Flooding has already begun along the Missouri River. KHP aircraft will be periodically checking the rising waters over the coming days. pic.twitter.com/f82yZBFWY4

2:55 p.m. | The Atchison County, Missouri Sheriff has issued an emergency immediate evacuation order for portions west of Interstate 29 due to flooding. This is near the Missouri/Iowa border.

Owne also advised residents to monitor river levels through the weekend on the River Gauge website.

2:20 p.m. | Communities in northern Missouri along the Missouri River continue to get ready for a predicted swell of water coming from Nebraska and points north.

Early Friday afternoon, the Missouri State Highway Patrol closed Interstate 29 at U.S. 136 near Rock Port, Missouri, and north to the Iowa border due to flooding conditions.

Gov. Mike Parson is holding a news conference in St. Joseph at 4:30 p.m. to discuss flooding impacts. The state’s emergency operations center has already been activated.

“I urge Missourians to use care when traveling in flood areas and to never attempt to drive on flooded roads,” Parson said in a release. “People who live near rivers should be paying close attention to flooding updates and be ready to move valuable property, if necessary.”

As of 1:15 p.m. Friday, the National Weather Service has issued several Flood Warnings along the Missouri River, including portions where the river runs through the Kansas City metro.

The Kansas State Animal Response Team has been called to assist in animal rescues on the Kansas side of the Missouri River.

Further north in Nebraska, the Missouri and Platte rivers were flooding in and around Omaha. Video from the Nebraska State Patrol shows cattle stranded on islands after floodwaters cut off their escape.

From the Fremont area this morning on the Platte. Each of those little islands has dozens of cattle on it, stranded with no place to go.

Our thoughts are with our agriculture industry as they will certainly feel the effects of this flooding. pic.twitter.com/PK8gpu2NMb

In Omaha, the National Weather Service office was evacuated due to flooding concerns.