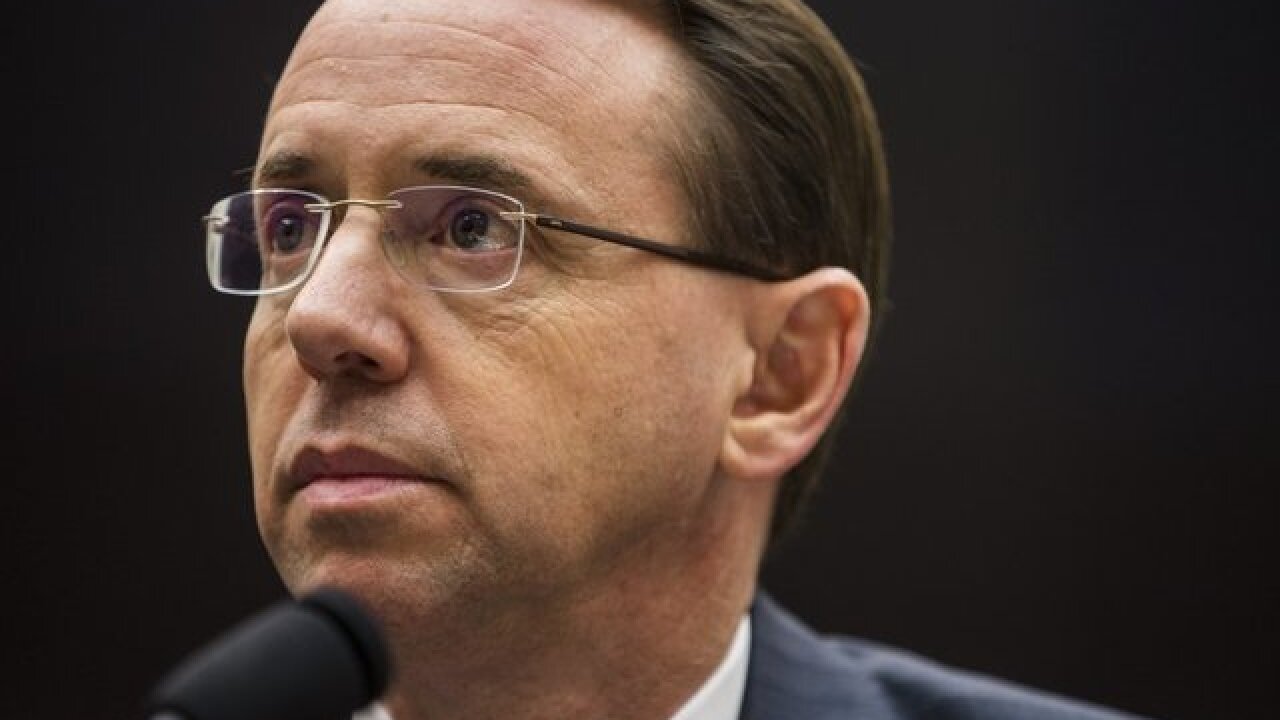 President Donald Trump will meet with Rod Rosenstein Thursday as speculation mounts over whether the deputy attorney general will be dismissed.

Rosenstein was at the White House Monday and a source said he expected to be fired. He met with chief of staff John Kelly and spoke with Trump, who is in New York.

"At the request of Deputy Attorney General Rod Rosenstein, he and President Trump had an extended conversation to discuss the recent news stories," White House press secretary Sarah Sanders said in a statement. "Because the President is at the United Nations General Assembly and has a full schedule with leaders from around the world, they will meet on Thursday when the President returns to Washington, DC."

If he leaves, Rosenstein's departure would spark immediate questions about the long-term job security of special counsel Robert Mueller.

Noel Francisco, the solicitor general, would take on oversight of Mueller's investigation into Russian meddling in the 2016 presidential election.

The expectation that Rosenstein will leave the administration came after The New York Times reported he secretly discussed recording President Donald Trump and invoking the 25th Amendment to remove the President from office.

But GOP allies of Trump urged him to hold off on a purge of Justice Department officials until after the confirmation of Supreme Court nominee Brett Kavanaugh.

People familiar with the conversations said in the hours after the Times report, Trump questioned whether to fire him immediately. Rosenstein denied the Times report as "inaccurate and factually incorrect."

"I never pursued or authorized recording the President and any suggestion that I have ever advocated for the removal of the President is absolutely false," Rosenstein said in a later denial.

Trump appointed Rosenstein as deputy attorney general but had expressed extreme frustration with him for months, partly over his decision to hire Mueller last year. Trump has repeatedly branded the investigation a "witch hunt" and complained that Rosenstein is "conflicted" because he is a witness in the investigation after writing a letter advocating the firing of former FBI Director James Comey over his handling of the Hillary Clinton email investigation.

Rosenstein also signed off on Mueller sending a tax and fraud case against Michael Cohen to the US Attorney's office for the Southern District of New York, a move that ultimately led to an FBI raid on the offices and homes of the President's former lawyer, who is now speaking with prosecutors.

Rosenstein, born in Philadelphia, graduated from the University of Pennsylvania and later Harvard Law School before starting a 27-year run at the Justice Department.

After rising through the ranks, Rosenstein was unanimously confirmed as United States attorney for the District of Maryland in 2005 under then-President George W. Bush. Rosenstein was nominated by Bush to the federal appeals court in Richmond in 2007, but his nomination was blocked by Maryland's two Democratic senators.

He became the only Bush-appointed US attorney to serve throughout all of President Barack Obama's eight-year tenure.

His time under Bush, Obama and then Trump made him the longest-serving US attorney in the nation's history when he was confirmed to his current role under Sessions.

Rosenstein was confirmed to the deputy attorney general post by an overwhelmingly bipartisan Senate vote of 94-6 last year.