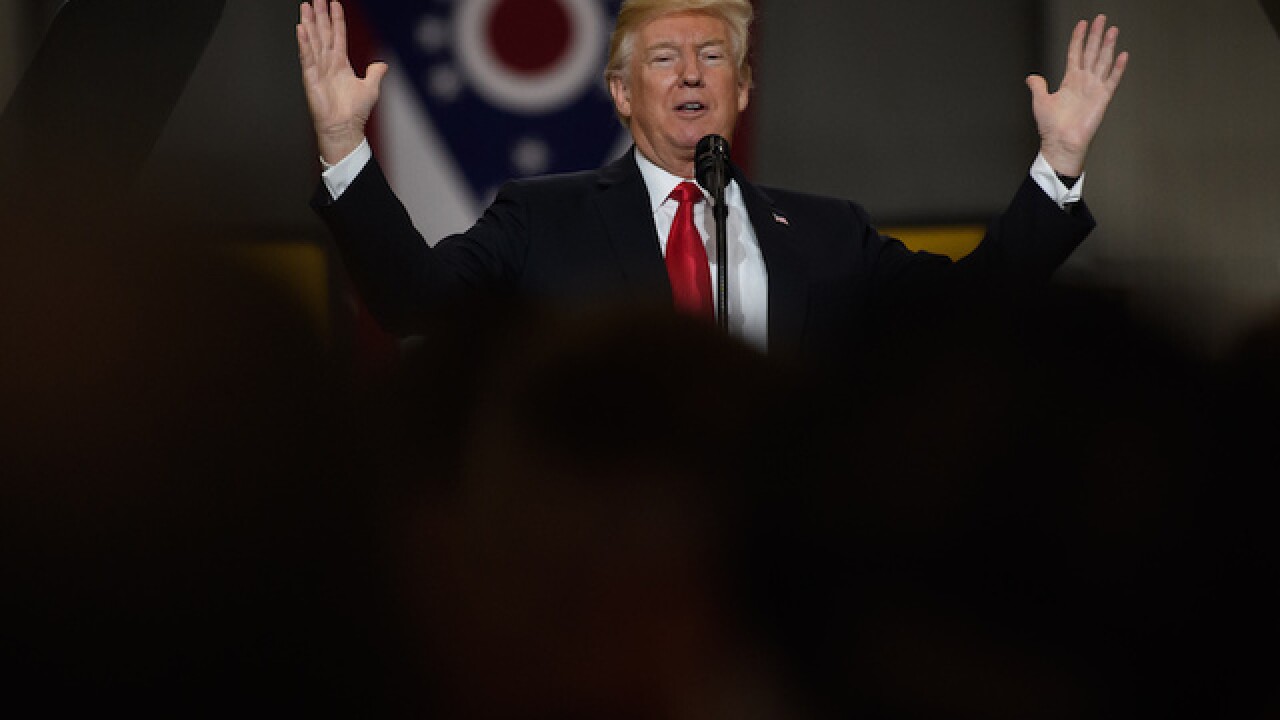 Copyright Getty Images
Jeff Swensen
<p>U.S. President Donald Trump speaks to a crowd gathered at the Local 18 Richfield Facility of the Operating Engineers Apprentice and Training, a union and apprentice training center specializing in the repair and operation of heavy equipment on March 29, 2018 in Richfield, Ohio. President Trump's remarks centered upon infrastructure investment in the economy and labor statistics. (Photo by Jeff Swensen/Getty Images)</p>

President Donald Trump's attorney in a defamation case with a former "Apprentice" contestant is asking a judge for an interim stay pending appeal, which would temporarily suspend the case until the appeal has been decided.

The lawsuit was filed by Summer Zervos in January 2017 and alleges Trump defamed her after she accused him in an October 2016 news conference of sexually assaulting her in 2007.

Trump's attorney, Marc Kasowitz, is appealing the March 20 ruling by New York Supreme Court Justice Jennifer Schecter, who allowed the case to go forward. The move was expected, and Zervos' legal team plans to fight it.

Trump's lawyers had filed a motion to dismiss the case, arguing during a December 2017 hearing that a president has immunity from such lawsuits in state courts and that the case would conflict with his official duties, arguments that Schecter dismissed. The team also argued the President's frequent denials of accusations made by Zervos and others were protected political speech under the First Amendment because they were statements of opinion, an argument also dismissed by Schecter.

Kasowitz wants the appellate court to revisit the matter of whether the Constitution's Supremacy Clause bars a state court from hearing an action against a sitting president, calling it a key issue.

"Where, as here, a critical threshold constitutional issue is at stake -- a stay to permit appellate review is mandated," Kasowitz writes, later adding, "The necessity for this procedure -- deciding the issue of immunity before the case proceeds -- is of course only magnified when the party asserting immunity is the highest-level government official in the country."

Schecter's ruling cited Clinton v. Jones, the 1997 decision in which the US Supreme Court held that a sitting president is not immune from being sued in federal court for unofficial acts. That case left open the question of whether "concerns of federalism and comity compel a different conclusion for suits brought in state court." Schecter ruled such concerns do not prevent this case from moving forward in state court.

"No one is above the law," she wrote. "It is settled that the President of the United States has no immunity and is 'subject to the laws' for purely private acts."

But in the nine-page document filed with the state Supreme Court's appellate division and dated April 2, Kasowitz wrote that Trump will show on appeal that Schecter ruled incorrectly and noted that in Clinton v. Jones, "the U.S. Supreme Court explicitly recognized that an action in state court might very well 'present a more compelling case for immunity.'"

"Under both federal law and the law of this State, that question must be resolved as a threshold matter before the action proceeds," Kasowitz wrote. "That is precisely what the courts did in Clinton v. Jones."

Kasowitz said Schecter also erred on denying the President's motion to dismiss or delay the case on First Amendment grounds.

Trump's team submitted 12 exhibits in support of the stay motion. Those exhibits include articles written by legal scholars, a Washington Post article about the Clinton v. Jones case and a Hollywood Reporter article about Gloria Allred, until recently one of Zervos' attorneys on the case, meant to show the suit was politically motivated.

Also included among the exhibits is copy of a lower court ruling in Clinton v. Jones that rejected President Bill Clinton's immunity but stayed the case, pending appeal, which Kasowitz is arguing should happen in this case. The stay motion cites a series of additional cases in which a suit was suspended pending appeal on the immunity issue.

Kasowitz plans to perfect the appeal, a technical term that means preparing the case for the judge, by July 9, one of many deadlines established by the court as part of the appeal process. Based on an agreement filed Monday between Kasowitz and Zervos' attorney Mariann Meier Wang, the actual appeal will not be heard until September.

Schecter's decision to allow Zervos' case to move forward was a significant development for a president already facing a lawsuit by adult film star Stormy Daniels, who was paid to keep quiet about her allegations of a consensual affair with Trump. It could also open the floodgates for similar cases focused not on the alleged misconduct itself, but on Trump's response to the allegations. Trump's personal lawyer Michael Cohen said in a statement that Trump "vehemently denies" any encounter with Daniels.

Zervos is one of more than a dozen women who have accused Trump of sexual misconduct ranging from groping of their buttocks and genitalia to unwanted kissing. He has also been accused by two additional women of inappropriate behavior like ogling. Trump's team has denied all of the allegations.