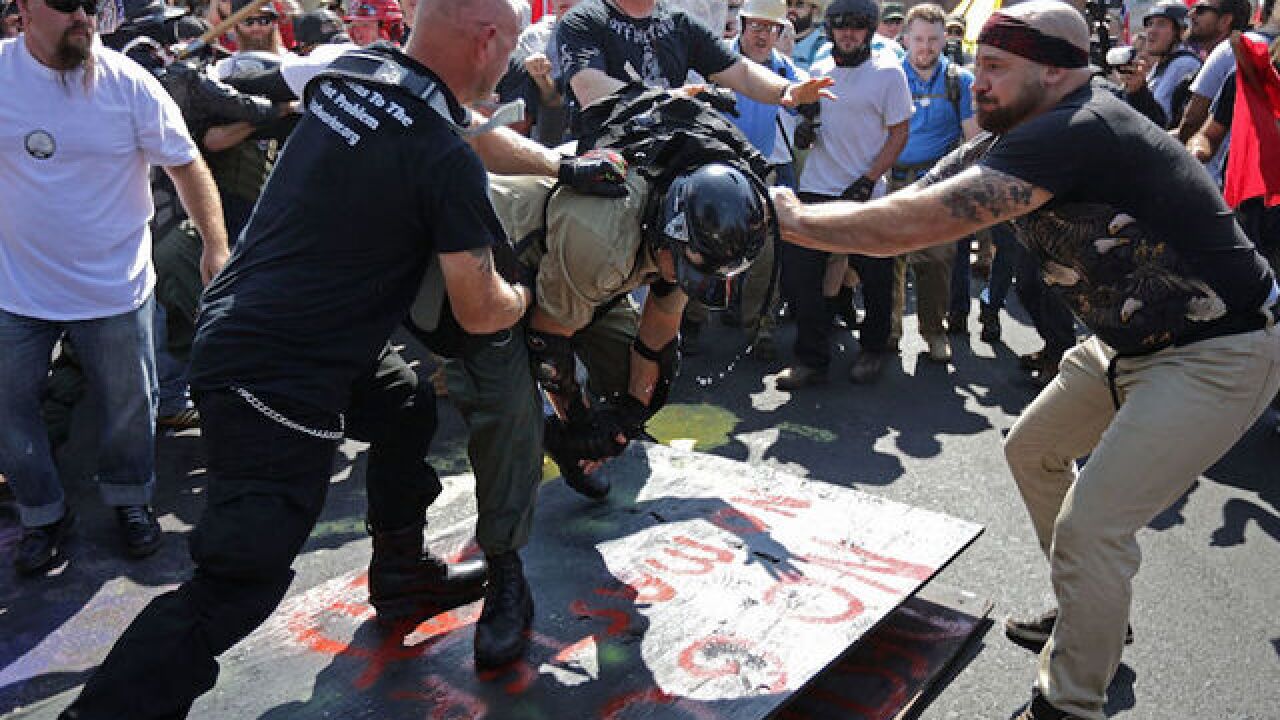 Image copyright 2017 Getty Images. All rights reserved. This material may not be published, broadcast, rewritten, or redistributed.
Chip Somodevilla
<p>White nationalists, neo-Nazis, the KKK and members of the 'alt-right' attack each other as a counter protester (R) intervenes during the melee outside Emancipation Park during the Unite the Right rally August 12, 2017 in Charlottesville, Virginia.</p>

Four alleged members of a militant white supremacist group have been charged with inciting rioting and assaulting counterprotesters at last year's deadly rally in Charlottesville, Virginia.

Prosecutors described the men as "serial rioters" who attend political rallies to engage in violence against those who disagree with them.

The complaint identified the defendants as members and associates of the Rise Above Movement, a militant white supremacist organization based in Southern California, who traveled to Virginia in August last year to protest the removal of the Robert E. Lee and Stonewall Jackson statues in Charlottesville.

Rise Above Movement members openly identify themselves on social media as "alt-right" and "nationalist" and frequently post videos and photos of themselves in public parks performing physical training and mixed martial arts street-fighting techniques "in order to prepare to engage in fighting and violence at political rallies," the complaint said.

The group espouses anti-Semitism and violence toward those who "hold opposite ideologies to their own," according to the complaint, which includes numerous photos of the defendants engaging in violence at rallies.

Three of the defendants appeared in federal court Tuesday. It's unclear whether they have attorneys.

A criminal complaint filed in US District Court for the Western District of Virginia identified the California men as Benjamin Drake Daley, 25, of Redondo Beach; Michael Paul Miselis, 29, of Lawndale; Thomas Walter Gillen, 34, of Redondo Beach; and Cole Evan White, 24, of Clayton.

Daley, Miselis, and Gillen appeared in federal court where they were ordered held without bail by a federal magistrate judge, CNN affiliate KCBS-TV reported.

Prosecutors told the court that the men will face trial in Virginia. A detention hearing will be held next week. The station also reported that White appeared in federal court in San Francisco, but his status was not clear.

"The four individuals arrested today traveled from California to Charlottesville to incite a riot," Tom Chadwick of the FBI said at a news conference.

US Attorney Thomas Cullen described the men as "serial rioters," saying they also engaged in acts of violence at California political rallies last year in Huntington Beach, Berkeley and other cities.

'Among the most violent individuals' at rally

The criminal complaint unsealed Tuesday called the defendants "among the most violent individuals" at the Charlottesville rally.

The men face riot and conspiracy charges, with maximum prison sentences of five years on each count, according to Cullen. The prosecutor said the investigation is ongoing, and additional arrests are possible.

The violence at the August 2017 event began ahead of a planned rally that the Southern Poverty Law Center described as the "largest hate-gathering of its kind in decades."

On their way to the Unite the Right rally in Emancipation Park, Daley, Miselis, Gillen and White had "with their hands taped and ready to do street battle, committed multiple acts of violence, including punching, kicking, headbutting and pushing numerous people," Cullen said.

Their victims included an African-American man, two women and a minister wearing a clerical collar, Cullen said. Some were seriously injured.

Photo and video footage in the complaint show the group wearing half-skull masks in group shots.

In the complaint, prosecutors say White is shown apparently head butting a man in a clerical collar and a female counterprotester. The woman suffered a severe laceration, and could be seen with blood on her face in a photo within the complaint.

Gillen, Daley and Miselis are shown assaulting multiple counterprotesters, the complaint said. In other photos, some of the men are seen apparently kicking and slamming counterprotesters to the ground.

White allegedly used a torch as a weapon and Daley boasted on social media of hitting five people at a torch-lit rally, the complaint said.

The complaint includes numerous photos of the defendants engaging in violence at rallies.

Scuffles and fistfights broke out over that weekend before a man drove a silver Dodge Challenger into a crowd, killing Heather Heyer, 32, a local paralegal whose father said she was always fighting for others.

An Ohio man accused of driving the car was charged with second-degree murder in Heyer's death.

The four men arrested are not implicated in Heyer's death.