Four people have died from disease 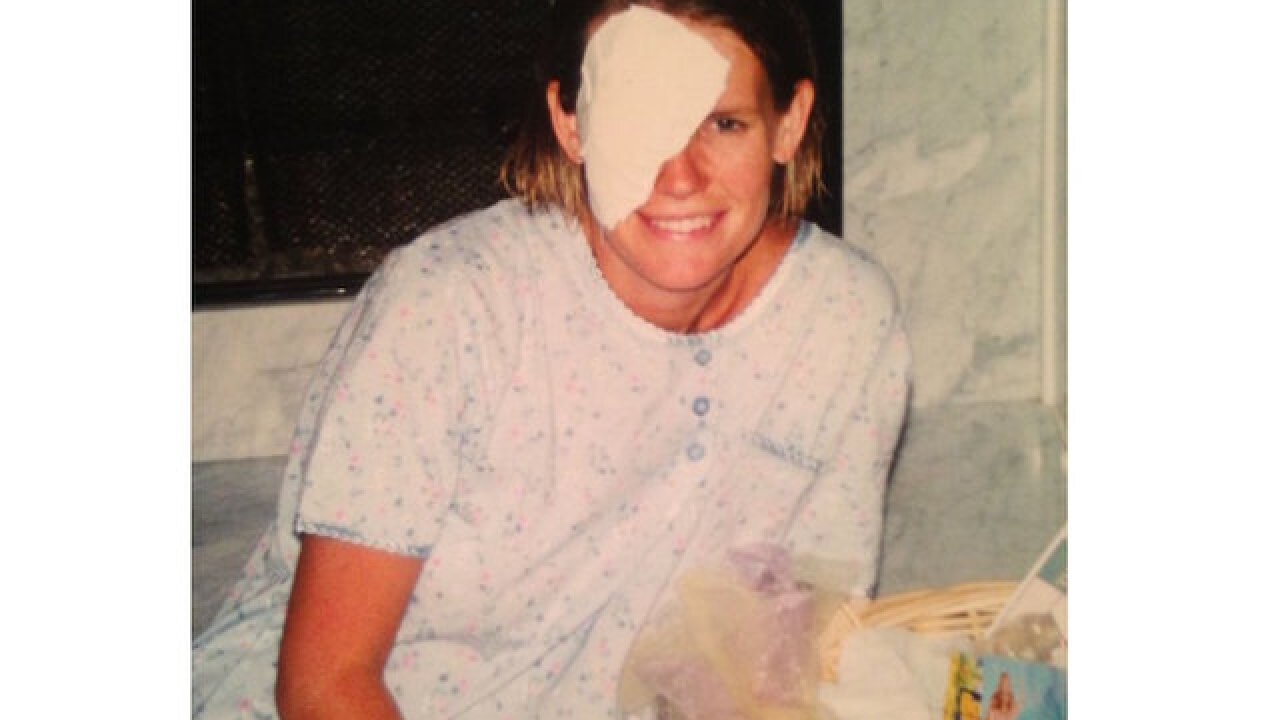 © 2018 Cable News Network, Inc.
Allyson Allred
<p>Allyson Allred was diagnosed with ocular melanoma in 2001, at the age of 31, 11 years after she graduated from Auburn. Doctors think there may be a connection between her case and others in the Auburn, Alabama area.</p>

A group of patients with a rare type of eye cancer called ocular melanoma has researchers and epidemiologists stumped.

The cancer, which normally occurs in about six in every 1 million individuals, has been identified in more than 50 individuals around two locations: Huntersville, North Carolina, and Auburn, Alabama. At least 38 of these individuals attended Auburn University between 1983 and 2001, according to a Facebook page for the group of patients.

At least four have died of the disease.

Juleigh Green was the first person from the Auburn group to be diagnosed with the condition, in 1999. She had surgery to remove her left eye in 2000 and has not had any recurrences since, she says.

"When I was diagnosed, I kept wanting to talk to someone who had been through this before and had done well," Green said. "But it seemed like nobody had heard of this or had any connection with anyone who had this, and that's when I realized how incredibly rare it was."

Ocular melanoma refers to a malignant tumor that develops from cells called melanocytes that produce the dark-colored pigment melanin, which is present in people's skin, eyes and hair and the lining of some internal organs, according to the Ocular Melanoma Foundation.

Symptoms vary by person but generally include blurry vision, spots in the visual field and vision loss, according to Dr. Marlana Orloff, an oncologist at Jefferson University Hospitals in Philadelphia, who is treating a number of the people in the Alabama group.

"For the primary eye tumors, it will either be incidentally picked up on routine eye exam having no symptoms, or more commonly patients have symptoms of a retinal detachment with flashes and floaters or blurry vision," Orloff said.

Ocular melanomas are the second most common type of melanoma -- after cutaneous, or skin, melanomas -- and represent about 5% of all melanoma cases. However, ocular melanomas behave much differently than cutaneous melanomas and are generally considered to be more lethal, according to Orloff.

"Even though people want to lump it in with skin melanoma, we know that it's a very different disease, and a lot of the treatments for skin melanoma don't work for eye melanoma. There's really nothing officially FDA-approved to treat eye melanoma," Orloff said.

In about 50% of ocular melanoma cases, the cancer spreads, or metastasizes, to the liver. Only about 80% of patients with liver metastases survive longer than a year, according to a 2005 study.

But Allyson Allred, a preschool teacher in Birmingham, has beaten those odds.

"My doctor said only 3% make it as long as I have. Ninety-six percent of the people die once it spreads to their liver, and mine spread to my liver in 2008," Allred said.

Allred was diagnosed with ocular melanoma in 2001, at the age of 31, 11 years after she graduated from Auburn. She was the second person in her group of friends to be diagnosed with the condition, she says.

"I was the second one diagnosed from Auburn, and I'm the one who told my doctor in Philadelphia that I had two friends with the same cancer, and that's when they realized there may be a cluster in Auburn and started researching this," Allred said.

Allred has undergone two liver resections and is receiving radiation to shrink metastatic tumors that have spread to at least nine places in her body, she said.

There is no known cure for ocular melanoma, although radiation therapy and surgery can help prolong the length and quality of life, according to Orloff.

"Once they're diagnosed, the treatment is often radiation," Orloff said, "or if the tumors are very large or depending on location, enucleation, or removal of the eye," may be necessary.

The exact cause of ocular melanoma is still unknown. Individuals at highest risk include those with light eye color, those with light skin color and those exposed to high levels of artificial UV radiation. People with certain occupations, such as cooks and metal workers, also appear to have an increased risk, according to a 2001 study.

No common cause has been identified in the current group of cases, Orloff says.

"We are not calling them official clusters. In order to meet the definition of a 'cluster,' you need to look at the expected incidence and observed incidence, and for a number of reasons it's been hard to qualify these as true clusters," Orloff said.

"But certainly, it's a unique accumulation of cases," she added.

The Alabama Department of Public Health indicates it is evaluating the recent increase in cases but says it has not identified a common source.

"We are working closely with Auburn, a survivor we have connected with and Dr. Orloff's team," said Justin George, director of cancer epidemiology at the Alabama Department of Public Health. "We are collaborating and working in an advisory role; the survivor who has spoken out is providing us a complete list of all those who have been sickened, and then we will work to verify the incidents and make sure the cases meet the definition of ocular melanoma."

Auburn said in a statement that it is "working closely with the Alabama Department of Public Health, which is leading the review of area cases of uveal melanoma. Researchers from the Sidney Kimmel Cancer Center and the coordinator of research in North Carolina have also been involved.

"While we have been informed by ADPH officials that it would be premature to determine that a cancer cluster exists in the area, we are cooperating fully with their work. The health and safety of our students, employees and alumni are of the utmost importance."

Allred believes the group of cases among former Auburn students is no coincidence. She and at least two other patients lived in neighboring sororities and were all education majors, she said.

Green and another patient "were in the same sorority, and my sorority dorm was right next to theirs. And we were all education majors," Allred said.

"We need the funding for the research to figure out what possibly could be the environmental cause. ... There must be some link, and if we can find that link, we're that much closer to finding a cure and preventing people from continuing to get this," she added.

Three of the physicians treating the Alabama cases have also organized a task force to help raise awareness and funding for research into the causes and treatments of ocular melanoma, according to Allred.

"Auburn has so far not contributed money, so we're going to go back and try to get some other options to get our funding," she said.

"But we've had lots of people praying for us, and I believe in the power of prayer," Allred added. "I have a strong faith that the Lord is my healer, and we have many hundreds of thousands of people praying who have gotten us through this."