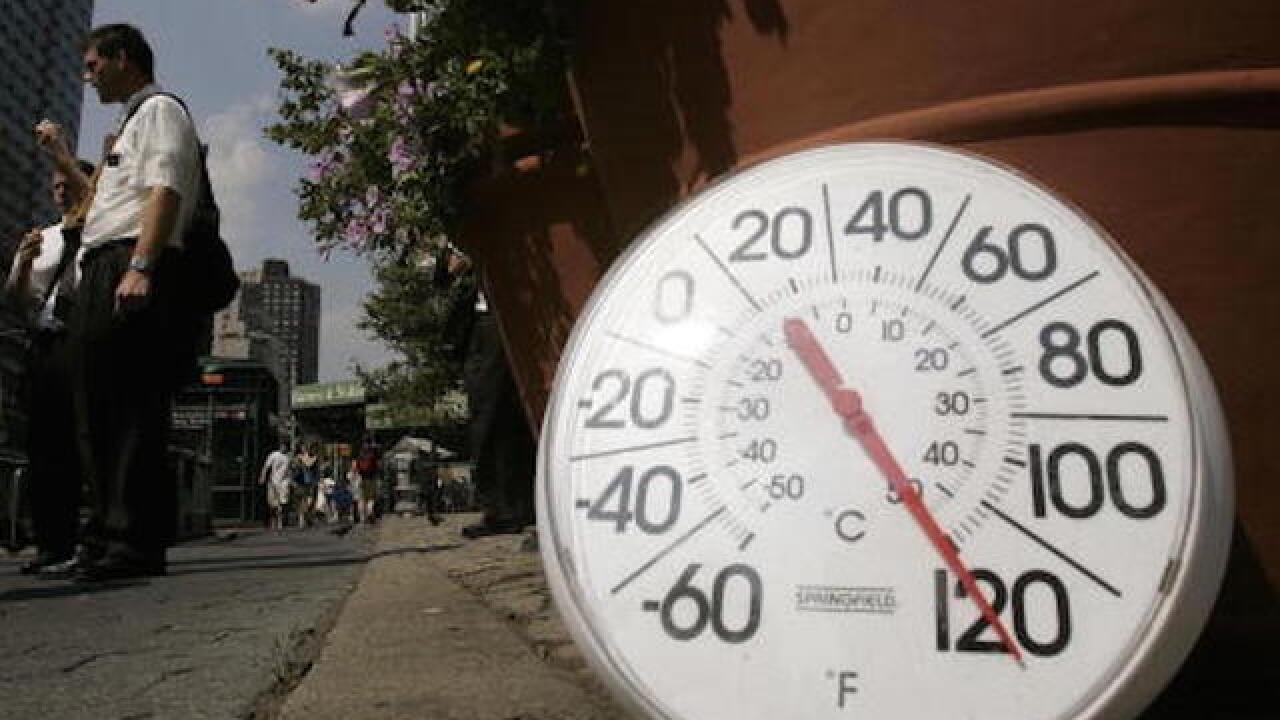 Copyright Getty Images
Chris Hondros
<p>NEW YORK - AUGUST 02: A thermometer in the sun on the sidewalk indicates a temperature of 120 degrees Fahrenheit as people eat ice cream on the Upper West Side August 2, 2006 in New York City. Forecasters have called for high temperatures of 100 degrees in the city with the heat wave continuing through tomorrow. (Photo by Chris Hondros/Getty Images)</p>

His death brings the number of children who have died in hot cars in the U.S. this year to at least 27, including six in Texas, said Janette Fennell, founder and president of KidsAndCars.org, a national child safety nonprofit based in Philadelphia. That's up from last year's total of 15.

The baby's father, who works at the store in the suburb of Helotes, told officers that he forgot to drop his son off at day care before going to work about 6:15 a.m. Friday, said Helotes police Capt. Anthony Burges. The father found his child dead after finishing work and returning to the SUV about 3 p.m.

Temperatures in the area hovered around 100 degrees much of the afternoon.

The father was taken to a hospital after reporting chest pains, Burges said. No charges have been filed, and the identities of the father and boy have not been released.

According to the National Highway Traffic Safety Administration and data collected by San Jose State University, the number of children dying of heat stroke in automobiles began to rise following the widespread introduction of passenger-side air bags in the 1990s.

With the children strapped into the back seat, drivers can tend to forget them, Fennell said.

Fennell said the numbers of heatstroke deaths of kids in cars fluctuated in the following decades, averaging 37 such deaths a year since 1998. The worst year was 2010, with 49, according to both a count by Fennell and Jan Null, a research meteorologist at San Jose State University, who also tracks numbers.

This year, on Aug. 4, twin 15-month-old girls died after being found in the back seat of a hot SUV parked in front of a duplex car Carrollton in northwestern Georgia. When police arrived, they found people holding the girls in the water of a baby pool behind the duplex, some with ice packs, trying to cool the girls off.

The temperature inside a parked car on a 90-degree day will reach 119 degrees in 20 minutes and 133 degrees after an hour, Null said.

Parents should get into the habit of always opening their back doors when they leave the vehicle, according to Fennell. Leaving a purse or cellphone in the back seat can help. Parents also need to make sure their day care calls them if the child doesn't show up, she said.