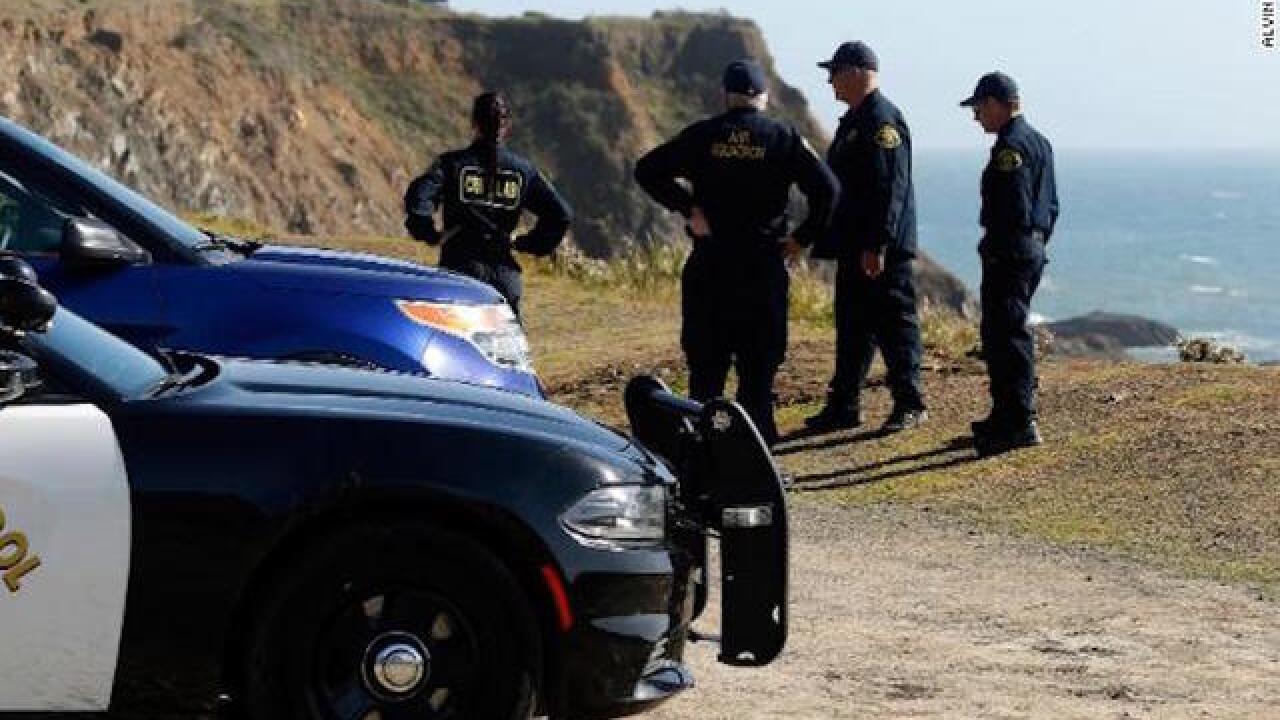 © 2018 Cable News Network, Inc.
Alvin Jornada
<p>California Highway Patrol officers and deputy sheriffs from Mendocino and Alameda counties gather after a search for three missing children Wednesday, March 28, 2018, at the site where the bodies of Jennifer and Sarah Hart and three of their adopted children were recovered two days earlier, after the family's SUV plunged over a cliff at a pullout on the Pacific Coast Highway near Westport, Calif. Three of the children, Devonte Hart, 15, Hannah Hart, 16, and Sierra Hart, 12, have not been found. (Alvin Jornada/The Press Democrat via AP)</p>

In photos, the Hart family was all smiles, projecting an image of a diverse, modern family with two white mothers and six adopted children.

The family of eight smiled, wrapped their arms around each other and sometimes held feel-good signs like: "Love is always beautiful" and "Free hugs." A photo of one of their children, Devonte went viral in 2014 after he held such a sign.

But beneath the veneer, there were cries for help from the kids, reports from neighbors and allegations of child abuse. Neighbors described troubling encounters with the kids crying for help and asking for food, one of which prompted a report to Child Protective Services in March.

About four months before the Harts' SUV plunged off a cliff in Northern California, a man made a 911 call regarding the family.

"There's some kids that I feel is being highly abused," the man told dispatch in November.

He reported a disturbing event in which one of the kids came to his daughter's house -- who had lived next door to the Harts -- begging for help around 2 a.m.

It was one of at least four events in which the kids had appeared to have told other adults about troubles at home in a case that has raised questions about the family as well as the red flags that preceded the incident.

It's not immediately clear if authorities took any action following that November call.

On March 26, the Hart family's SUV was found upside down on a shoreline in California and five of their bodies -- the parents, Jennifer and Sarah Hart; Markis, 19, Jeremiah and Abigail, both 14, were found. Three of their siblings, Devonte, 15, Hannah, 16, and Sierra, 12, are still missing, and could have been swept away by seawater because no one was wearing seat belts.

The deadly crash came as child protection personnel in Washington state were trying to visit the family after a report of a child's complaint of mistreatment. When officials came to visit the Hart's home in Woodland, Washington, no one answered.

Authorities believe the deadly crash may have been intentional.

'They were all scared to death'

The Hart family had recently lived in Woodland, Washington. And in November, a man made a call to 911 regarding the family.

The caller was a father of a woman who lived next door to the Harts.

"They have 4 black children but that part doesn't matter," he told dispatch. "They're new here, Texas, but the other night, a little girl jumped out of the second story window on the roof and then down to the ground and then ran to my daughter and this is like 2 in the morning, begging them to help her."

He said the girl cried and begged his daughter not to let her parents know that she was there. They were notified and one of the parents came over.

"Then she [one of the parents] had all four of the kids come back later and say everything was okay, and they were all standing at attention, like they were all scared to death," the man told dispatch. "And I think there's something very serious going on there."

The girl didn't specify why she was scared, he said.

The caller said he had to report the incident after this daughter told him about it.

"The more I sit on it, I just can't live with it. Somebody has to go there and check on these kids," he said.

It was unclear what action was taken after this call.

Child asks for food from neighbor

Neighbor Bruce DeKalb said he had two disturbing encounters with the kids. The first involved one of the girls telling him they were being mistreated.

"One of the girls came to the door at 1:30 in the morning and said that she needed help and the parents were not treating her properly, and (she) wanted us to protect her," DeKalb said.

"We ended up getting her back to her parents ... and then I went over there the next morning and just checked on things, and everything seemed normal, and we let it go from there."

Then a few weeks before the deadly incident, Devonte "started coming over asking for food and saying that they were taking meals away from him due to punishment," DeKalb told HLN.

"It started out as one time a day and escalated up to three times a day, until a week went by and we decided that we needed to get professional help."

DeKalb said he called Child Protective Services on March 23, and officials arrived just after Jennifer Hart came home from work. But she didn't answer the door.

By the next morning, the family and their vehicle were gone.

It had no prior history with the Hart family and had been trying to get in touch after the children "were identified as potential victims of alleged abuse or neglect," according to its statement.

But CPS wasn't the only ones trying to find them.

On March 26, a friend of Sarah Hart called 911 requesting a welfare check on their home. The friend told the operator that she received a text from Sarah Hart, saying that she was sick, unable to come out and may need to see a doctor. Her phone was dead and no one had since seen her or her wife, the friend told dispatch.

Five of Hart family members' bodies were found in California that day.

The six children were adopted from Texas. Family and friends told detectives that the Harts traveled together and were rarely apart.

Over the last decade, the family moved from state-to-state and homeschooled their kids.

One of the parents, Sarah Hart had pleaded guilty to domestic assault in 2011 after she told police that she had bent her 6-year-old child over the bathtub and hit her over behavior issues.

Jennifer Hart was alleged to have struck one of their kids in the arm, leaving a bruise on the arm, the child had told another adult in 2008. The parents told authorities that they didn't know how the bruise got there and said the child had fallen down eight stairs days before.

They said the child had food issues, stealing people's food at school, eating out of garbage cans or off the floor. That case was closed.