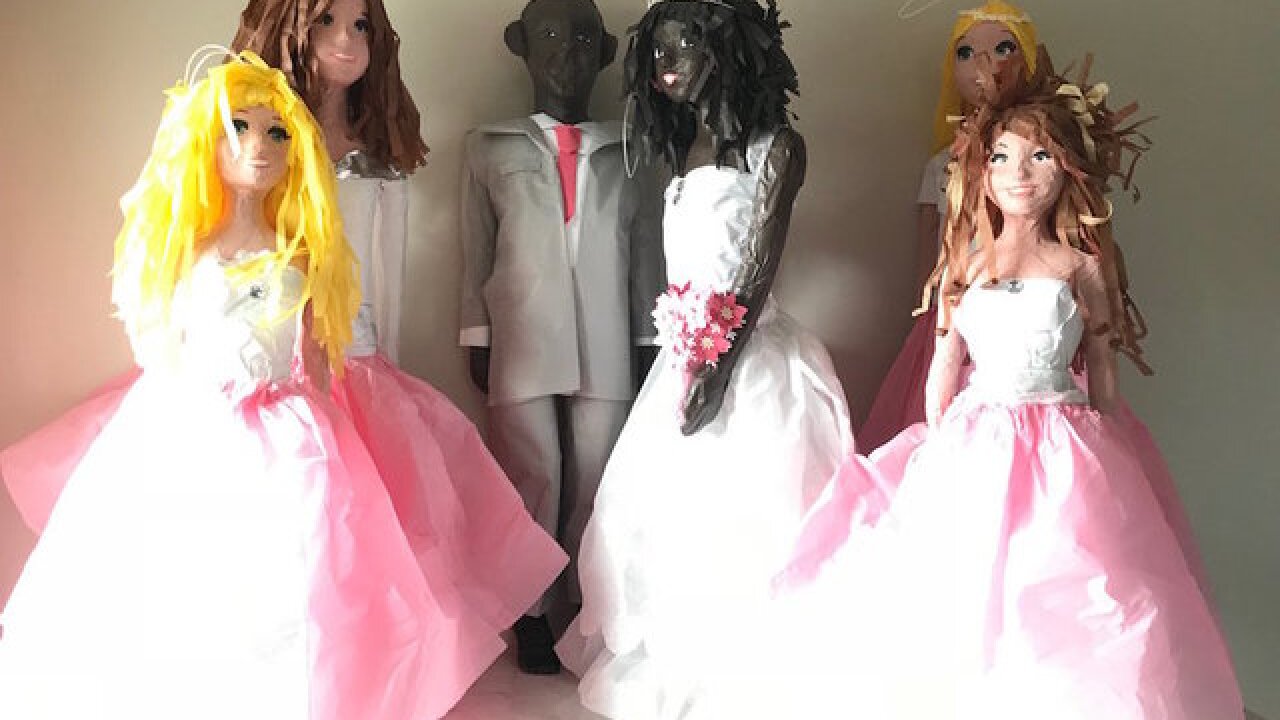 © 2018 Cable News Network, Inc.
Courtesy: Victor Chavarria
<p>Minnesota business owner, Victor Chavarria, custom-made these piñatas for a wedding. He is apologizing for hanging pieces of his work -- piñatas which look like black people -- from the front porch of his house.</p>

A Minneapolis piñata maker is apologizing for hanging pieces of his work -- piñatas which look like black people -- from the front porch of his house.

The episode caused an uproar in his mostly African-American neighborhood after passersby mistook the piñatas, which he says he hung up to dry, for a racist display.

It all started when Victor Chavarria, owner of Happy Kids piñatas, was filling an order for a wedding. The customer had requested racially diverse piñatas that looked like members of their wedding party.

So Chavarria got up at 4 a.m. Friday to create the papier-mache piñatas, then hung them on the front porch of his home in northern Minneapolis to dry.

Someone driving by his house that morning snapped a photo of the piñatas and put it on Twitter.

The social post soon brought a stream of threats to Chavarria, and even his wife and two toddlers.

Dear Minneapolis WTF is this?!?!? pic.twitter.com/4M1iE6JKOU

He immediately took the piñatas down and called the police because of the threats and all of the people driving by his home.

Chavarria, a Mexican immigrant, said he considered going back to Mexico to get away from the uproar, which continued through the weekend. But after talking with his friends and neighbors, including a few African-American pastors, he decided to stay in the neighborhood where he's lived for three years and explain that it was all a misunderstanding.

"There's no hate in this home. I don't know how else to deliver this message," Chavarria told CNN. "I'm very, very sorry for my lack of judgment and lack of sensitivity."

Chavarria said he understands now, after looking at the picture, how the scene must have looked to his neighbors.

He said the wedding order was canceled because of the controversy.

But Chavarria said he is actually grateful for the conversations it has sparked. Many of his African American neighbors explained to him why the photo disturbed them, he said, but they also offered their support for the man known as "the piñata guy" in the neighborhood.

One of those neighbors parked his truck in front of Chavarria's home and talked to the many people who were driving by, explaining that Chavarria meant no harm.

Chavarria said he's willing to do whatever he can to fix the damage from the misunderstanding.

He's also making one other change: From now on, he'll dry his piñatas in the back of the house.