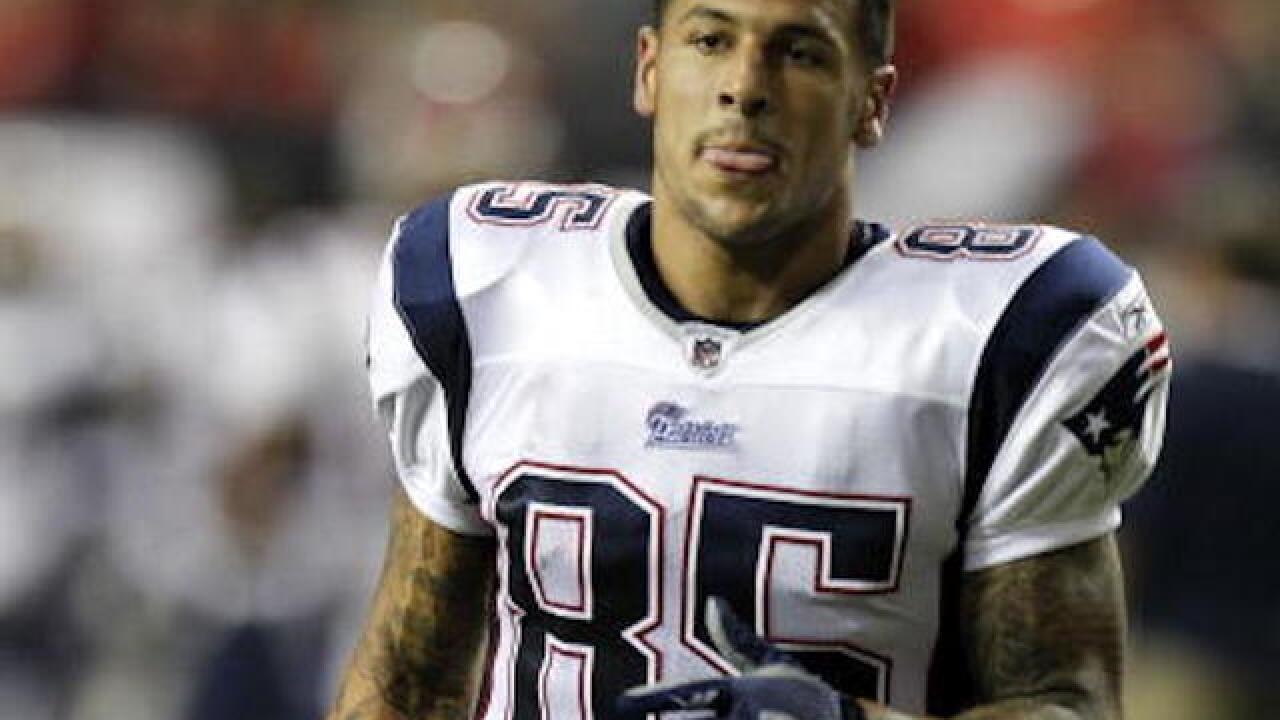 Image copyright 2017 Getty Images. All rights reserved. This material may not be published, broadcast, rewritten, or redistributed.
Mike Zarrilli
<p>ATLANTA - AUGUST 19: Tight end Aaron Hernandez #85 of the New England Patriots jogs off of the field during halftime during the preseason game against the Atlanta Falcons at the Georgia Dome on August 19, 2010 in Atlanta, Georgia. (Photo by Mike Zarrilli/Getty Images)</p>

About a month after Aaron Hernandez was convicted of murder and sentenced to life in prison, a correction officer at Souza-Baranowski Correctional Center in Massachusetts visited his cell to check for marks and bruising.

However, Hernandez had blocked the door, making it difficult for the guard to open.

When he finally entered, the guard saw redness on Hernandez's knuckles and elbow. He put Hernandez in restraints and escorted him to be seen by medical staff, but Hernandez was "agitated and insolent" to the officer.

"You just making up s***," Hernandez told the officer.

After getting a medical check, Hernandez again became insolent.

Those details are included in a lengthy prison discipline record on Hernandez, which CNN obtained through a public records request. The disciplinary record provides one of the first looks into Hernandez's life behind bars before his death on April 19. The Medical Examiner has ruled it a suicide.

The red marks on Hernandez, surveillance footage would later show, stemmed from a fight in his cell the morning of May 17, 2015, one of several fights Hernandez would engage in during his time in prison, according to prison records.

In all, Hernandez racked up about a dozen separate disciplinary offenses between May 2015 and October 2016, including three fistfights, two smoking-related issues, two surprise prison tattoos and possession of a nearly six-inch sharpened metal shiv.

Hernandez, the former NFL star, had been serving a life sentence since April 2015, when he was convicted of the 2013 killing of Odin Lloyd. He was found hanged in his cell last month, just days after his acquittal in a separate double homicide.

Yet throughout his high-profile legal troubles, Hernandez himself largely remained silent. He did not testify at either murder trial and did not communicate publicly to the press.

Prison officials and attorneys for Hernandez did not respond to requests for comment.

CNN has previously reported parts of the above incident from May 17, 2015, in which Hernandez was disciplined for being a lookout as two other prisoners fought in his cell. The fight was believed to be gang-related, a law enforcement source with knowledge of the incident said at the time.

Though described as a lookout, Hernandez was seen on surveillance video entering and exiting the cell several times, according to the disciplinary report.

One of the prisoners was sent to an outside hospital for further medical attention, according to the disciplinary record.

Hernandez pleaded guilty to the offenses of fighting and conduct that disrupts the normal operation of the facility.

Three months later, on August 20, Hernandez was assigned to a new housing unit in prison. He began putting his property in the cell when another inmate walked over to him.

Video surveillance showed the inmate attempted to shake his hand. But Hernandez struck the inmate with closed fist punches to the face, and they engaged in a fight that had to be broken up by chemical agent, according to the offense report.

Both were taken for medical evaluation and placed in segregation.

In a redacted followup report on that fight, the altercation is characterized as "an ongoing feud" between unnamed parties. The report states that Hernandez and the individual were "known to feud with each other within the institution."

On December 3, 2015, a search of Hernandez's personal belongings uncovered a prison-made weapon -- a 5 3/4 inch piece of metal sharpened to a point, with a cloth handle and a wrist tether.

Hernandez's final citation for fighting came a year later, on June 10, 2016. Disciplinary reports say that he and another inmate exchanged blows outside of their cell. Hernandez was removed from the housing unit and held in "disciplinary detention" for five days. He also lost all visitation privileges from his family and friends for 45 days.

Shortly after he was sentenced to life in prison, Hernandez surprised onlookers when he appeared in court on May 21, 2015, bearing a new tattoo on his neck. The text: "Lifetime Loyalty."

That tattoo was a surprise to prison officials, too, when they discovered it a week earlier, according to the report.

Hernandez pleaded guilty to being tattooed while incarcerated, a violation of prison policy.

He got another tattoo on the right side of his neck in July of that year, and was punished again.

A toxicology report after Hernandez's death found that he had no drugs in his system. Still, he had faced tobacco-related offenses before, according to the disciplinary report.

Video surveillance showed Hernandez smoking tobacco product from a homemade cigarette and then passing it to another unnamed person on July 24, 2015. He was found guilty of possessing tobacco products for that offense.

In another incident more than a year later, Hernandez twice failed to pass through a metal detector and was strip searched. Prison officers found a prison-made lighter concealed in the waistband of his scrubs, according to the report.

On May 16, 2015, offense reports show Hernandez used another prisoner's telephone calling card pin number to place a 14-minute call. The incident was all caught on a surveillance camera.

The name of the person he called was redacted from the prison disciplinary report. The report states that Hernandez pleaded guilty to the charge.

On July 15, 2015, the disciplinary records detail a scene that would be echoed in Hernandez's apparent suicide more than a year later. A guard conducting an afternoon "cell decorum" patrol found a curtain hanging from the top bunk of Hernandez's cell, and another hung across the doorway, blocking a clear view into the cell.

Hernandez was written up, and netted 15 days without cafeteria privileges for the offense.

An eerily similar scene greeted a different guard last month, when, early on the morning of April 19, a guard found a sheet hung in front of Hernandez's cell door. The guard told Hernandez to remove the sheet or acknowledge the command, according to the Worcester County district attorney's report on Hernandez's death.

Receiving no response, the guard knocked aside the sheet to reveal Hernandez hanging naked from a bed sheet attached to the window, according to the report. The door to his cell had been jammed shut with cardboard, the investigation found.