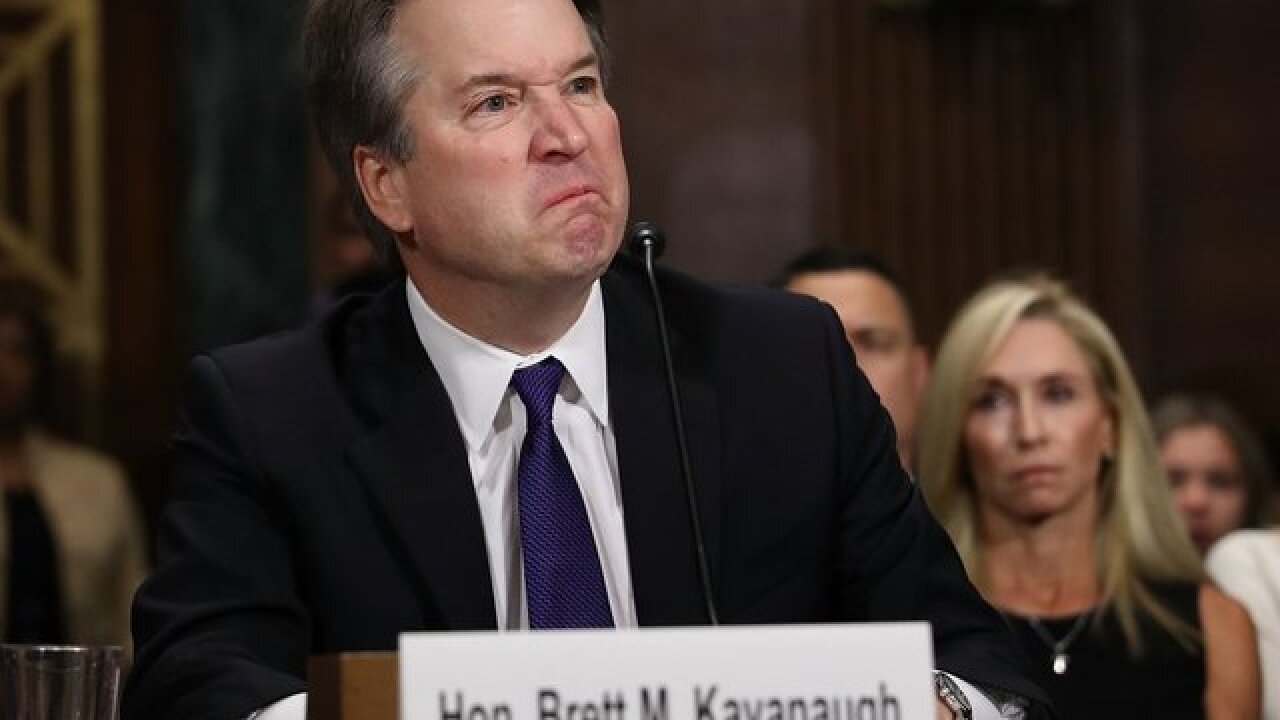 Women and their allies came to Washington, DC, on Thursday to protest Brett Kavanaugh's nomination to the nation's highest court.

They met at the Barrett Prettyman Federal Courthouse before marching to the Supreme Court, where they held a rally offering words of support to each other and victims of sexual violence.

Organizers initially planned for protesters to then make their way to the East Steps of the Capitol, where they were to hold a "direct action," but US Capitol Police barricaded the building, forcing protesters into nearby Senate office buildings.

No matter where they went, chants of "Say it loud, say it clear, Kavanaugh's not welcome here!" and "Whose court? Our court!" rose from the crowd as demonstrators linked arms and carried signs. Many signs read "KavaNOPE" and said the judge was "unfit to serve."

She carried a sign depicting the tense moment late last week when Republican Sen. Jeff Flake was confronted by a survivor of sexual assault prior to calling for an additional FBI investigation into sexual assault allegations against Kavanaugh.

"A man who has been credibly accused of sexual assault has no place making decisions on women's bodies for generations to come," Dercher said.

As the protest entered the Senate Hart Building, Capitol Police peacefully started arresting protesters one by one. Among those arrested was comedian Amy Schumer, who is a second cousin to Senate Minority Leader Chuck Schumer.

Senator: Report was a 'cover'

According to a release from the Women's March and the Center for Popular Democracy, the protest was to be held as US senators and key staff review the FBI's supplemental report on Kavanaugh and allegations of sexual misconduct made against him.

Sen. Kirsten Gillibrand of New York -- flanked by comedian Amy Schumer and actress Emily Ratajkowski -- told the crowd in front of the Supreme Court that she had viewed the report and was unsatisfied.

There was at least one moment of celebration: A roar went up from the crowd when it learned that Democratic Sen. Heidi Heitkamp of North Dakota, a red state, said she would vote against Kavanaugh's confirmation.

But many of the speakers directed their ire toward a handful of senators who were undecided on how they would vote -- specifically Sen. Flake of Arizona, Sen. Susan Collins of Maine and Sen. Lisa Murkowski of Alaska.

Marie Follayttar, a co-director of Mainers for Accountable Leadership, told the protesters she had a message for Sen. Collins.

Republican Majority Leader Mitch McConnell has set in motion a process designed to lead to a procedural vote on Kavanaugh's nomination Friday that would possibly lead to a final vote as early as the following day.

By the time protests got underway it was clear that GOP senators felt confident Kavanaugh's confirmation was all but guaranteed.

But protesters told CNN's Joe Johns that organizers had indicated the protests would serve to at least call attention to the issues at play, even if they wouldn't ultimately block Kavanaugh from becoming a Supreme Court justice.

That goal was clear throughout the afternoon as the crowd repeatedly broke out into cheers of "We believe you" each time a survivor was handed the microphone.

Madison Thomas, a survivor and an organizer with the Women's March Youth Empower organization, told the crowd she was "devastated" by the hearings last week and the message they sent to survivors.

"What the hearings told me was that our country, our congressmen, value the reputation and the career aspirations of my male classmates, or men, of my assaulter, more than my bodily autonomy," she said.

Activists like Elizabeth Kennedy -- who hoped to put pressure on a small group of key senators who remain undecided on Kavanaugh's nomination -- boarded buses in New York before sunrise Thursday morning to make the journey to Washington.

Earlier this week, President Donald Trump said that this is a "very scary time for young men in America, where you can be guilty of something you may not be guilty of."

"I think it's deeply problematic and concerning," Kennedy said of Trump's remarks, "because it's sending a message that it's not just about believing survivors, it's about the fact that we don't care about their experiences. ... It's important to remind us that we need to value those voices."