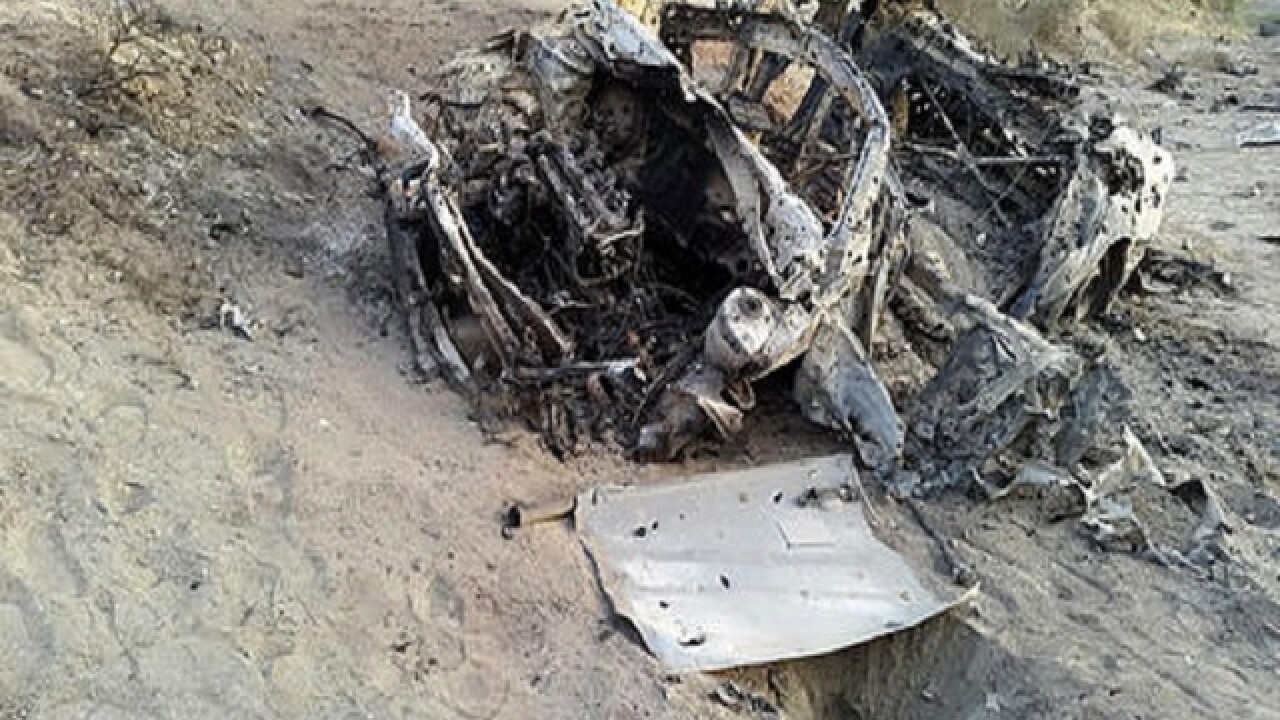 Abdul Salam Khan
<p>This photo taken by a freelance photographer Abdul Salam Khan using his smart phone on Sunday, May 22, 2016, purports to show the destroyed vehicle in which Mullah Mohammad Akhtar Mansour was traveling in the Ahmad Wal area in Baluchistan province of Pakistan, near Afghanistan's border. A senior commander of the Afghan Taliban confirmed on Sunday that the extremist group's leader, Mullah Mohammad Akhtar Mansour, has been killed in a U.S. drone strike. (AP Photo/Abdul Salam Khan)</p>

By: Associated Press
Posted at 12:22 AM, May 25, 2016
KABUL, Afghanistan (AP) — The Afghan Taliban confirmed on Wednesday that their leader Mullah Akhtar Mansour was killed in a U.S. drone strike last week and that they have appointed a successor — a scholar known for extremist views who is unlikely to back a peace process with Kabul.
The announcement came as a suicide bomber struck a minibus carrying court employees in the Afghan capital, killing at least 10 people, an official said. No one immediately claimed responsibility for the attack.
In a statement sent to the media, the Taliban said their new leader is Mullah Haibatullah Akhundzada, one of two of Mansour's deputies. The insurgent group said he was chosen at a meeting of Taliban leaders, which was believed to have been held in Pakistan, but offered no other details.
Mansour was killed in Pakistan on Saturday when his vehicle was struck by a U.S. drone, an attack that is believed to be the first time a Taliban leader was killed in such a way inside Pakistani territory.
Pakistani authorities have been accused both by Kabul and the West of giving shelter and support to some Taliban leaders — an accusation that Islamabad denies. The insurgents have been fighting to overthrow the Kabul government since 2001, when their own Islamist regime was overthrown by the U.S. invasion.
The United States and the Afghan government have said that Mansour had been an obstacle to a peace process, which ground to a halt when he refused to participate in peace talks earlier this year. Instead, he intensified the war in Afghanistan, now in its 15th year.
Mansour had officially led the Taliban since last summer, when the death of the movement's founder, the one-eyed Mullah Mohammad Omar became public. But he is believed to have run the movement in Mullah Omar's name for more than two years. The revelation of Mullah Omar's death and Mansour's deception led to widespread mistrust, with some senior Taliban leaders leaving the group to set up their own factions.
Some of these rivals fought Mansour's men for land, mostly in the opium poppy-growing southern Taliban heartland.
Senior Taliban figures have said Mansour's death could strengthen the movement, as he was in some ways a divisive figure. The identity of his successor was expected to be an indication of the direction the insurgency would take, either toward peace or continued war.
Akhundzada is a religious scholar, known for issuing public statements justifying the existence of the extremist Taliban, their war against the Afghan government and the presence of foreign troops in Afghanistan. His views are regarded as hawkish, and he could be expected to continue in the aggressive footsteps of Mansour.
Wednesday's statement said two new deputies had also been appointed — both of whom had earlier been thought to be the main contenders for the top job. One of them is Sirajuddin Haqqani, who was also one of Mansour's deputies and who leads the notorious Haqqani network — the faction behind some of the most ferocious attacks in Afghanistan since the war began in 2001. The other is the son of Mullah Omar, Mullah Yaqoub, who controls the Taliban military commissions for 15 of Afghanistan's 34 provinces.
The Taliban statement called on all Muslims to mourn Mansour for three days. It also attempted to calm any qualms among the rank and file by calling for unity and obedience to the new leader.
Afghan President Ashraf Ghani, who took office in 2014, assiduously courted Pakistan in an effort to bring the Taliban into a dialogue that would lead to peace talks. Mansour, however, refused, choosing instead to intensify the war once the international combat mission drew down to a training and support role in 2015.
Associated Press 2016