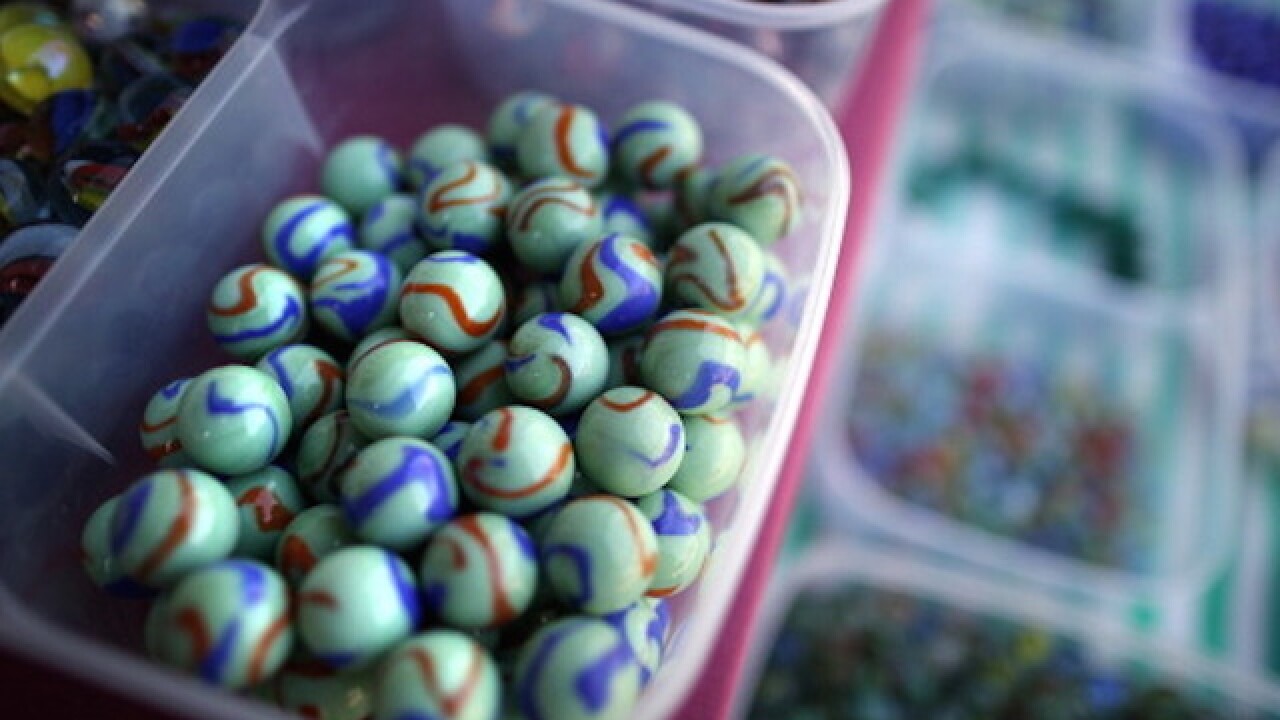 Copyright Getty Images
Peter Macdiarmid
<p>TINSLEY GREEN, ENGLAND - APRIL 06: Marbles are displayed for sale at the British and World Marble Championships on April 6, 2012 in Tinsley Green, England. On Good Friday every year, contestants from all over the world gather at The Greyhound pub in Tinsley Green, Sussex to take part in the Championships. The game is played between two teams of six players in a ring with a diameter of six feet. The object of the game is to knock 25 out of 49 'target marbles' out of the ring using 'tolley' marbles before the opposing team. (Photo by Peter Macdiarmid/Getty Images)</p>

Louie, of Mesa, Colorado, is 11 and he shoots marbles. He shoots them so well, in fact, that he scored five "sticks" — think of a tennis player serving and slamming four aces in a row— to beat Zayd Hadjali, 14, of Lansdowne, Pennsylvania, by a score of 8-2 in the best of 15 game series.

With the win, Louie was dubbed "king" of the 93rd National Marbles Championship. He took his place on a wooden throne next to "queen" Haley Grensko, 13, of Pittsburgh, who beat Lauren Shuty, 12, also of western Pennsylvania, 8-5.

Each had a white and gold fabric crown in place and the crowd of 200 counted down to the traditional kiss. A red-faced Louie kept his head down, then snaked his lips to Haley's cheek not once but three times as the crowd demanded. He then pulled the fabric down to his chin, hiding his face.

All joking aside, this is serious business: Both winners took home $2,000 college scholarships.

About 50 "mibsters" ages 8 to 14 played more than 1,200 games during the four-day tournament held in this New Jersey shore town for decades.

Playing games with marbles is an ancient practice — some were found in the ruins of Pompei. Organizers say it is a great sport as the costs to play are low and it's open to those who aren't natural athletes.

"It's a great family sport and it builds good values. It really does," said Beri Fox, president of the nonprofit National Marbles Tournament Inc. "We have great kids."

There are marble-playing hotspots, specifically Colorado and Pennsylvania. Maryland also has a strong presence on the national scene. There are also local dynasties. Louie's grandfather and mother are coaches who claim at least six recent champions. Louie's older sister finished in the semi-finals in her division.

Haley got her start when she befriended a former national champion who encouraged her to try it.

"I'm so happy, I kinda want to cry again," Haley said. "My goal was to make the top eight."

The game played during the championship is called "Ringer." It begins with 13 marbles — also known as "mibs" — placed in a cross-shape in the center of the 10-foot diameter circular ring. The first person who shoots seven marbles outside of the ring wins.

Like every sport, there are ways to get ahead, and a lot of it comes down to spin. If a player knocks a marble from the circle while keeping their shooter in the ring, they shoot again. That means the first player can win without the second player ever shooting. That's called a "stick."

The championship is usually played outside on platforms on the beach, but threatening weather brought it inside to the Wildwoods Convention Center. Whereas outdoor games are boisterous, there was a hushed quality this year. Even the play-by-play announcer adopted a slow, whispery manner of speaking usually heard during a golf match. "This is game marble," he'd whisper as a player aimed to shoot a 7th marble from the ring.

Leah Lee, Louie's mother and coach, said her son began crawling around rings before he could walk. He was shooting marbles at age 3 and playing in his first tournament at age 5.

Louie was a little more reticent after the tournament.

"I'm embarrassed," he said. "I had to kiss a girl. Three times, and the third time they made me hold it for three seconds."