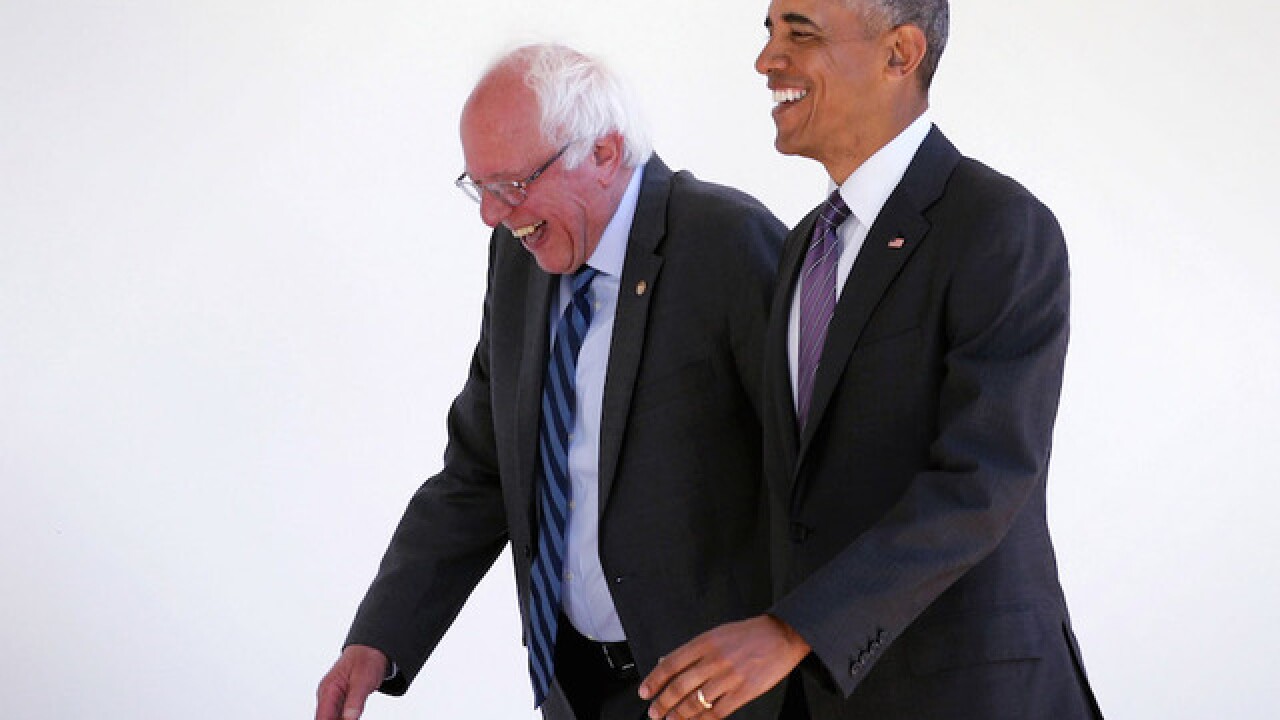 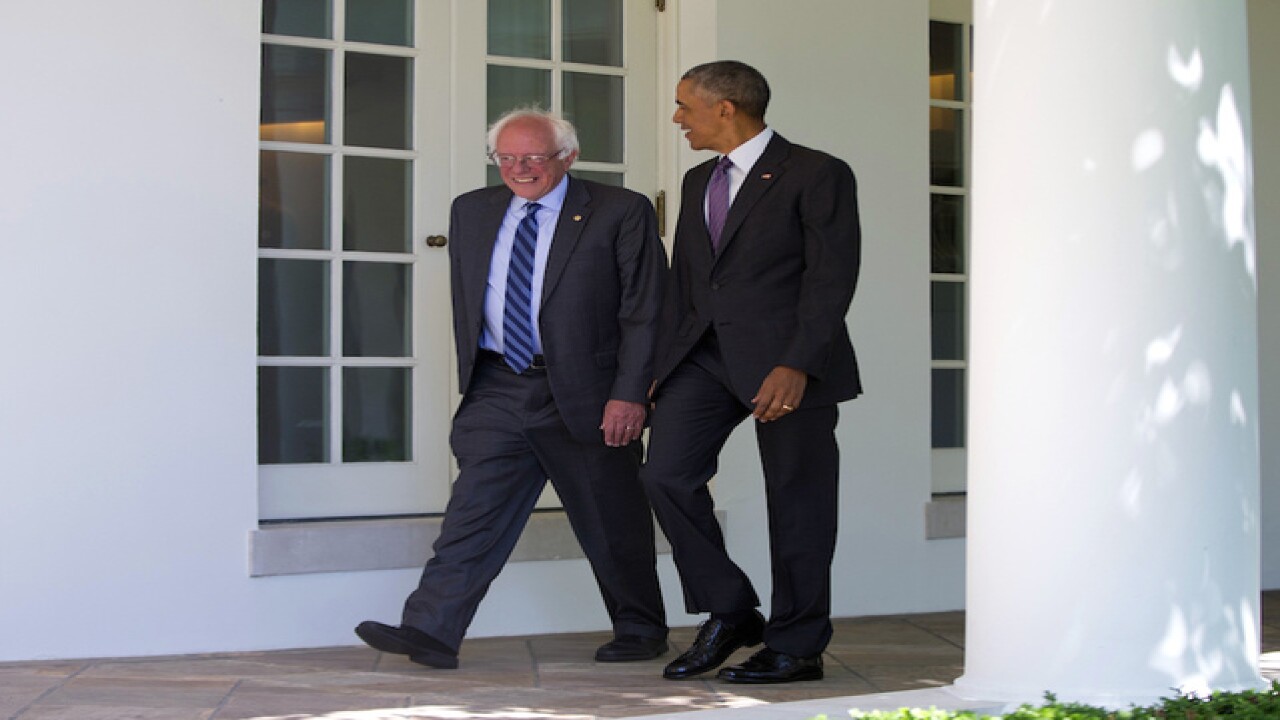 With calls growing for him to quit, Bernie Sanders came to the White House on Thursday for a meeting that President Barack Obama hoped to use to try to nudge the Vermont senator to accept defeat in the Democratic race. Obama planned to endorse Hillary Clinton after the meeting.

The high-profile meeting in the Oval Office illustrated the intensifying effort within the Democratic Party to unite behind Clinton as the nominee so the party can focus fully on defeating Republican Donald Trump in the fall. Clinton declared victory over Sanders on Tuesday, having captured the number of delegates needed to become the first female nominee from a major party.

Sanders, accompanied by his wife, Jane, arrived at the White House late Thursday morning by motorcade, stopping first for coffee and a scone at a cafe nearby, his spokesman said. He and Obama walked together along the Rose Garden colonnade, smiling and laughing before entering the Oval Office.

After the private meeting, Sanders was expected to address reporters in the West Wing driveway before heading to the Capitol to sit down with Senate Democratic leader Harry Reid.

Though Sanders has shown signs he understands the end of his race is near — he was is off about half his team — he has vowed to keep fighting, stoking concern among party leaders eager for the primary race to conclude. Still looking like a candidate, Sanders planned a rally Thursday evening in Washington, which holds the final primary contest next week.

The situation has put Obama, the outgoing leader of his party, in the sensitive position of having to broker detente between Clinton and Sanders without alienating the runner-up's supporters, many of whom are angry over what they see as the Democratic establishment's efforts to strong-arm him out of the race. Clinton is counting on Sanders' supporters backing her to defeat Trump.

Obama, who has made clear he believes the race is over, was expected to formally endorse Clinton following his meeting with Sanders. Aiming to pay tribute to the historic nature of the self-described Democratic socialist's candidacy and his throngs of young supporters, Obama has sought to give the senator the courtesy of exiting the race on his own terms.

"It was a healthy thing for the Democratic Party to have a contested primary. I thought that Bernie Sanders brought enormous energy and new ideas," Obama said Wednesday during a taped appearance on "The Tonight Show Starring Jimmy Fallon". "And he pushed the party and challenged them. I thought it made Hillary a better candidate."

Obama planned to use the meeting, requested by Sanders, to discuss how to build on the enthusiasm Sanders brought to the primary, the White House said. That's a diplomatic way of saying it's time for Sanders to pass the baton to Clinton.

Now head-to-head in the presidential race, Clinton and Trump have one thing in common: Both are working to woo Sanders supporters. Trump has said he welcomes Sanders' voters "with open arms" while Clinton has vowed to reach out to voters who backed her opponent in the Democratic primary.

"He has said that he's certainly going to do everything he can to defeat Trump," Clinton said of Sanders in an Associated Press interview. "I'm very much looking forward to working with him to do that."

Trump, despite a string of victories this week that reaffirmed his place as the GOP nominee, was still working to convince wary Republicans that he's presidential material. Looking ahead to an upcoming speech attacking Clinton and her husband, Trump tried to turn the page following a dust-up over his comments about a Hispanic judge's ethnicity.

That controversy and others before it have led prominent Republicans, including House Speaker Paul Ryan, to openly chastise their party's nominee. Yet Trump's dominance in the GOP race is hard to overstate: He now has 1,542 delegates, including 1,447 required by party rules to vote for him at the convention. It takes just 1,237 delegates to win the Republican nomination.

For Sanders, any rationale for staying in the race has grown more tenuous as even some of his staunchest supporters have started looking to Clinton. Sen. Jeff Merkley of Oregon, the one Senate Democrat to endorse Sanders, said Clinton was the nominee and offered his congratulations. And Rep. Raul Grijalva, a Sanders backer from Arizona, suggested the time to rally behind Clinton would come after the District of Columbia primary on Tuesday.

"Bernie's going to do the right thing," Grijalva said.

Sanders has promised to continue his campaign through Tuesday's contest. But about half his campaign staff was being laid off, two people familiar with the plans said. They spoke on condition of anonymity because they weren't authorized to speak publicly about the layoffs.

Obama's aides have said he's itching to get off the sidelines and take on Trump. The key question is whether voters who helped elect him twice will follow his lead now that he's not on the ballot. Democrats have yet to see that powerful coalition of minorities, young people and women reliably show up for candidates not named Obama.