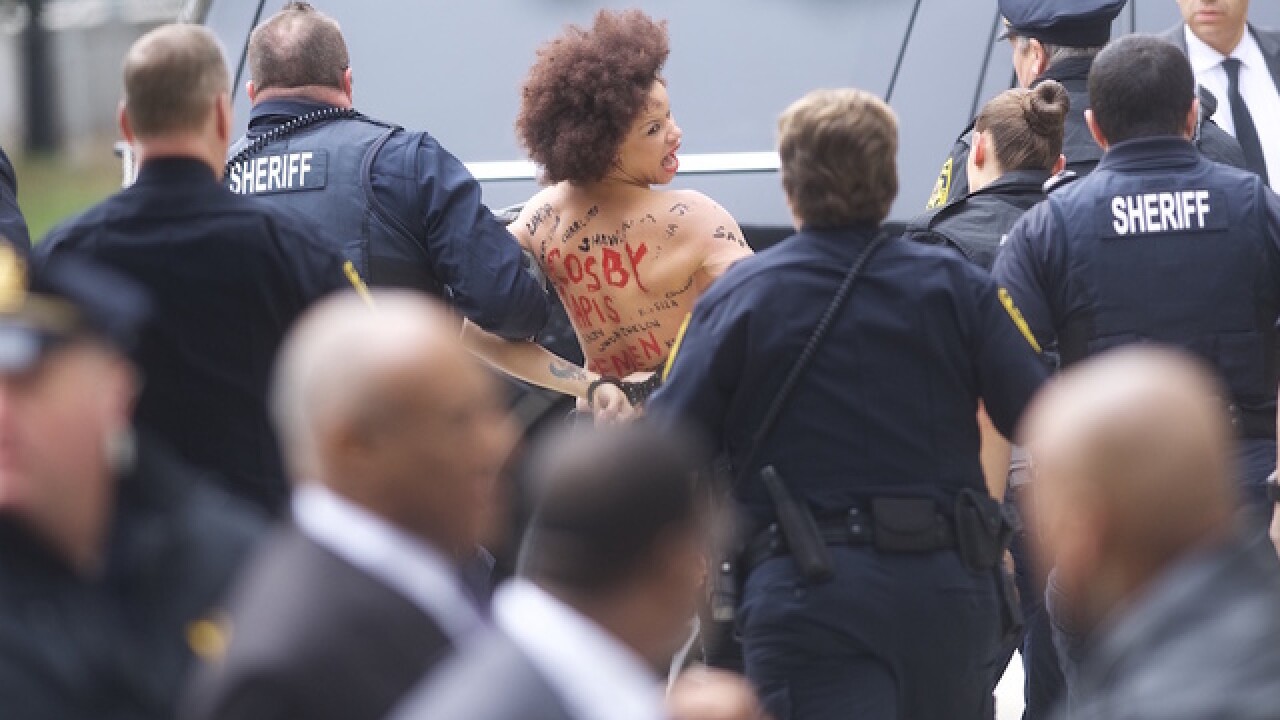 Copyright Getty Images
Mark Makela
<p>NORRISTOWN, PA - APRIL 9: A topless protestor wearing body paint is arrested by police officer as Bill Cosby arrives at the Montgomery County Courthouse for the first day of his sexual assault retrial on April 9, 2018 in Norristown, Pennsylvania. A former Temple University employee alleges that the entertainer drugged and molested her in 2004 at his home in suburban Philadelphia. More than 40 women have accused the 80 year old entertainer of sexual assault. (Photo by Mark Makela/Getty Images)</p>

Bill Cosby's retrial begins in Pennsylvania on Monday -- the first time the comedian's case returns to court since the #MeToo movement began six months ago.

A topless protester charged Cosby yelling "women's live matters," according to video taken at the scene. The demonstrator was taken down by police and taken into custody before she could reach Cosby, according to the Huffington Post.

Cosby, 80, faces three counts of aggravated indecent assault. He has pleaded not guilty to the charges.

The core of the trial is the dueling "he said, she said" dynamic between Cosby and Andrea Constand, a former Temple University employee who says that Cosby drugged her and then assaulted her at his home in 2004.

Cosby's attorneys have argued that he and Constand had a consenting sexual relationship.

With little to no forensic evidence, the prosecution's case relies on Constand and her testimony. Cosby's defense attorneys plan to try to undermine her testimony by arguing how "greedy" she was in a 2006 civil settlement with Cosby.

This is the second trial for Cosby on these charges. Last June, Montgomery County Judge Steven O'Neill declared a mistrial when jurors could not come to a unanimous verdict on any of the charges against Cosby.

But this case is different in several ways from the prior trial, both legally and culturally.

The allegations against Cosby stretch back more than a decade, but the trial takes place in a cultural moment vastly different from the one in which the first trial took place last year.

The rise of the #MeToo movement, led by women speaking out about harassment and assault, has caused male entertainment heavyweights like Harvey Weinstein, Matt Lauer and Kevin Spacey to fall from grace. Yet while those stars have faced professional repercussions, Cosby is currently the only once-powerful celebrity facing criminal charges.

Cosby, the star comedian once known as "America's Dad" for his portrayal of Cliff Huxtable on "The Cosby Show," will put the #MeToo movement to a major legal test.

If convicted, he could face up to 10 years in prison.

Several changes since the previous trial are likely to help the prosecution's case, legal experts said.

The #MeToo movement, which dominated the news since last fall, and its influence on jurors' views may make jurors more likely to believe accusations against a powerful celebrity. Prospective jurors were asked for their thoughts on the #MeToo movement during jury selection, as prosecutors and defense attorneys seated the jury of seven men and five women.

In addition, at the prior trial, prosecutors called up to the stand one woman who said Cosby had previously drugged and assaulted her, as prosecutors attempted to show that Cosby had a pattern of misconduct. This time, the prosecution will be allowed to seek testimony from up to five women who have accused Cosby of sexual misconduct in prior incidents.

Cosby also has new attorneys for this trial. The defense team is now led by Tom Mesereau, who is most famous for successfully defending Michael Jackson in his child molestation trial.

One legal change since the last trial may bolster Cosby's defense. Defense attorneys will be allowed to seek testimony from a Temple employee who claims Constand once admitted she could lie about being assaulted by a high-profile person and then collect a lot of money.