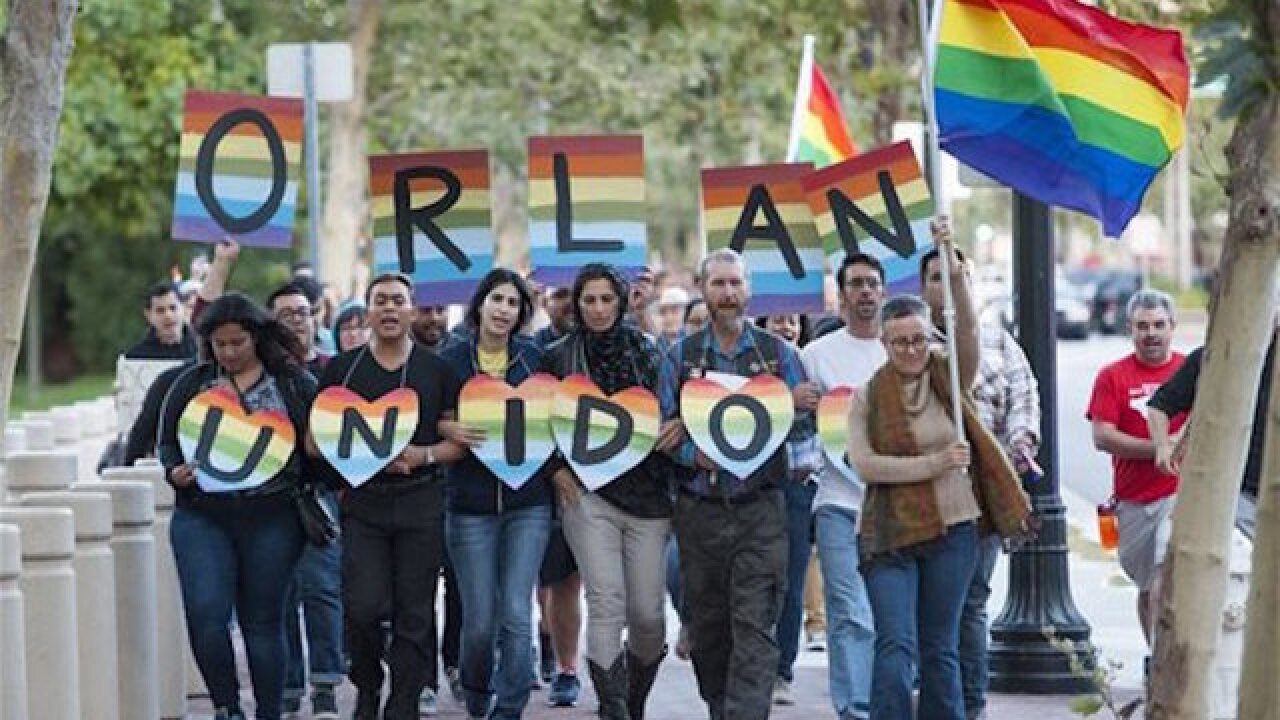 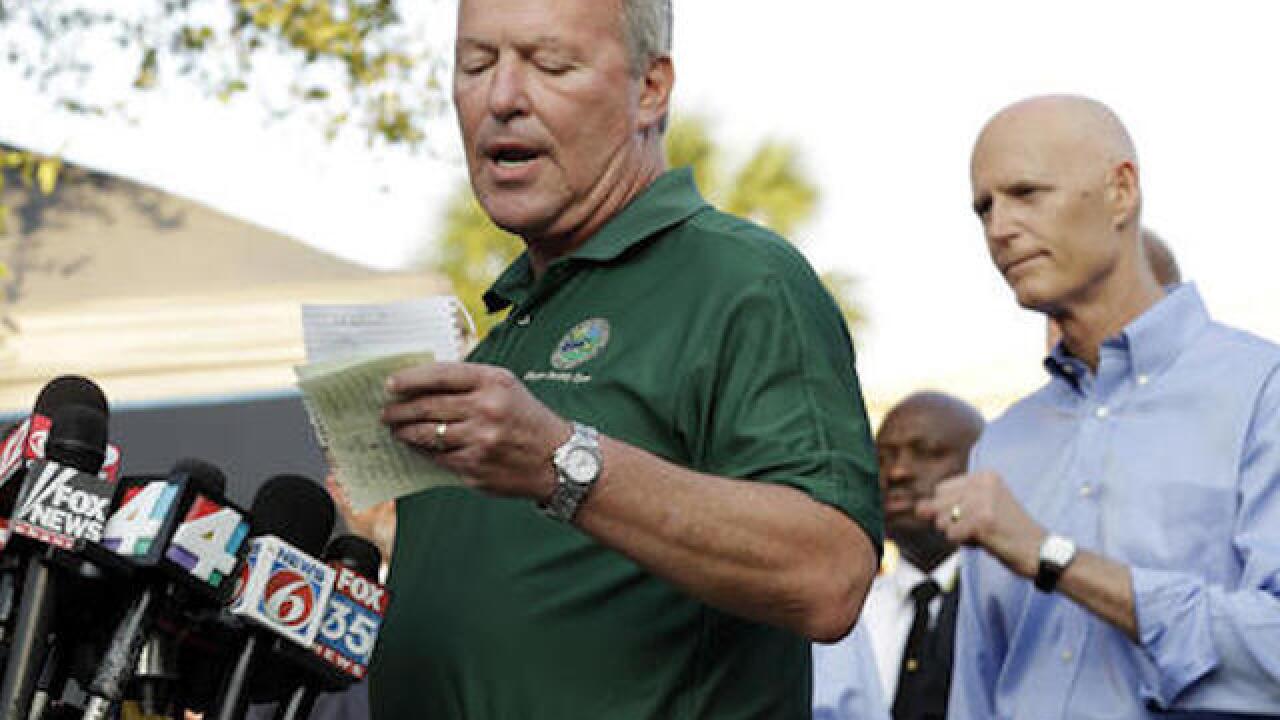 ORLANDO, Fla. (AP) — Orlando mourned the 49 people slaughtered in the attack on a gay nightclub, as the White House and the FBI portrayed the killer Monday as an apparent "homegrown extremist" who espoused support for a jumble of often-conflicting Islamic organizations.

The last of the bodies were removed from the nightclub late Sunday, and vigils and makeshift memorials to the victims of the deadliest mass shooting in modern U.S. history began to take shape as counterterrorism authorities delved into gunman Omar Mateen's background and defended their handling of their previous contacts with him.

Victims of the Orlando shooting have been identified

A look inside the home of Omar Mateen, suspected Orlando shooter

Wielding an AR-15 semi-automatic rifle and a handgun, Mateen, a 29-year-old American-born Muslim, opened fire at the crowded Pulse Orlando club early Sunday. He was killed in a gun battle with a SWAT team after police used explosives and a small armored vehicle to punch a hole in a wall and allow dozens of club-goers to escape, police said.

The tragedy shocked the nation and cast a pall over Orlando, known all around the globe as the home of Walt Disney World and other theme parks.

"We will not be defined by the act of a cowardly hater," Mayor Buddy Dyer vowed.

FBI Director James Comey said that Mateen had "strong indications of radicalization" and was probably inspired by foreign terrorist organizations.

He said Mateen called 911 around the time of the attack and not only pledged loyalty to the Islamic State but also expressed solidarity with the Tsarnaev brothers who carried out the Boston Marathon bombing and a suicide bomber who died on behalf of the al-Nusra front, a group at odds with the Islamic State.

In the past few years, Mateen also expressed support for both al-Qaida and its enemy Hezbollah, Comey noted.

The FBI investigated Mateen for 10 months beginning in May 2013 after he was said to have made inflammatory remarks in support of terrorists.

Comey said investigators introduced him to confidential sources, followed him and reviewed some of his communications, but Mateen claimed he made the remarks in anger because co-workers were teasing and discriminating against him because he was Muslim. The investigation was brought to a close.

As for whether the FBI should have done anything differently, "so far the honest answer is, 'I don't think so,'" Comey said.

At the White House, President Barack Obama said there is no clear evidence so far that Mateen was directed by the Islamic State. He said Mateen was inspired by radical information over the internet, calling it another apparent example of "homegrown extremism."

Meanwhile, a steady stream of people filed through a makeshift memorial about a mile from nightclub. It consisted of dozens of bouquets and candles.

Just after noon about 300 employees of Red Lobster — some in business suits, some in chef uniforms — paraded, walking two-by-two across the street to a park, each carrying a red or white carnation.

Counterterrorism experts have been warning in the past few years about the danger of so-called lone wolf attackers who act in sympathy with extremist groups like the Islamic State but are not directed by them.

Despite the 911 call from the club, Mateen's intentions seemed to become murkier when his Afghan immigrant father suggested another motive: anti-gay hatred. The father said his son got angry a few months ago when he saw two men kissing in Miami.

Also, Mateen's ex-wife attributed the violence to mental illness, saying he was bipolar and abusive toward her.

Obama said investigators are still looking into the killer's motivations and considering all possibilities, noting that Muslim extremist groups like the Islamic State have been known to target gays.

The Islamic State's radio called Mateen "one of the soldiers of the caliphate in America." Al-Bayan Radio, a media outlet for the extremist group, hailed the attack, saying that it targeted a gathering of Christians and gays and that it was the worst attack on U.S. soil since 9/11.

The statement gave no indication of whether the group planned or knew of the attack beforehand.

Mateen's father, Seddique Mir Mateen, told reporters Monday that the massacre was "the act of a terrorist," and added: "I apologize for whORLANDO, Fla. (AP) — The gunman whose attack on a gay nightclub left 49 victims dead appears to have been a "homegrown extremist" who espoused support for a jumble of often-conflicting Islamic radical groups, the White House and the FBI said Monday.

As Orlando mourned its dead with flowers, candles and vigils, counterterrorism investigators dug into the background of 29-year-old Omar Mateen for clues to why the American-born Muslim carried out the deadliest mass shooting in modern U.S. history.

Comey said the bureau is also trying to determine whether Mateen had recently scouted Disney World as a potential target, as reported by People.com, which cited an unidentified federal law enforcement source.

The FBI chief defended the bureau's handling of Mateen during two previous investigations into his apparent terrorist sympathies. As for whether there was anything the FBI should have done differently, "so far the honest answer is, 'I don't think so,'" Comey said.

Wielding an AR-15 semi-automatic rifle and a handgun, Mateen opened fire at Pulse Orlando early Sunday in a three-hour shooting rampage and hostage siege. During the attack, he called 911 to profess allegiance to the Islamic State group.

At the White House, President Barack Obama said there is no clear evidence so far that Mateen was directed by the group, calling the attack an apparent example of "homegrown extremism."

More details of the bloodbath emerged, with Orlando Police Chief John Mina saying Mateen was "cool and calm" during phone calls with police negotiators. But the chief said he decided to send the SWAT team in and bash through a wall after Mateen holed up with hostages in a bathroom and began to talk about bombs and an explosive vest.

"We knew there would be an imminent loss of life," Mina said.

Five of the wounded were reported in grave condition, meaning the death toll could rise. A call went out for blood donations.

In Orlando, mourners piled bouquets around a makeshift memorial, and people broke down in tears and held their hands to their faces while passing through the growing collection of flowers, candles and signs about a mile from the site of the massacre.

About 300 employees of the Red Lobster restaurant chain — some in business suits, some in chef's uniforms — emerged from the company's corporate headquarters and walked two-by-two across the street to the memorial, each carrying a red or white carnation.

"We will not be defined by the act of a cowardly hater," vowed Mayor Buddy Dyer, whose city of a quarter-million people is known around the globe as the home of Walt Disney World and other theme parks.

The tragedy hit the city's gay and Hispanic communities especially hard. It was Latino Night at the club when the attack occurred.

"As the names come out, they are overwhelmingly Latino and Hispanic names," said Christina Hernandez, a Hispanic activist. "These were not just victims of the LBGT community, but of the Hispanic community, as well. This was senseless bloodshed."

Despite Mateen's pledge of fealty to the Islamic State, a murky combination of other possible motives and explanations emerged, with his ex-wife saying he suffered from mental illness and his Afghan-immigrant father suggesting he may have acted out of anti-gay hatred. He said his son got angry recently about seeing two men kiss.

Mateen's grasp of the differences between Islamic extremist groups appeared to be shaky.

During three calls with 911 dispatchers, Mateen not only professed allegiance to ISIS but also expressed solidarity with a suicide bomber from the Syrian rebel group Nusra Front, and a few years ago he claimed connections to Hezbollah, too — both ISIS enemies, according to Comey.

The FBI became aware of Mateen in 2013 when co-workers told agents about his comments about connections to al-Qaida and Hezbollah, Comey said.

The FBI launched a 10-month preliminary investigation but closed it after following him, reviewing his communications and questioning him, the FBI chief said.

His name surfaced again as part of another investigation into the Nusra Front bomber. The FBI found Mateen and the man had attended the same mosque and knew each other casually, but the investigation turned up "no ties of any consequence," Comey said.

Mateen was added to a terror watch list in 2013 when he was investigated, but was taken off it soon after the matter was closed, according to Comey.

People who are in that database are not automatically barred from buying guns, and in any case Mateen purchased his weapons in June, long after he was removed from the list.

On Sunday, the bloodshed started after Mateen approached the club around 2 a.m., exchanged fire with an off-duty officer working security, and then went inside and started gunning people down, police said.

After two other officers arrived and exchanged gunfire with Mateen, the gunman holed up in a restroom with about five club-goers. An additional 15 to 20 were in another nearby bathroom, authorities said.

After Mateen began to talk about explosives, Mina made the decision around 5 a.m. to blow open a wall to the bathroom. The explosives didn't penetrate the wall completely, so an armored vehicle was used to punch a 2-foot-by-3-foot hole. Dozens of people escaped, and Mateen was gunned down, police said.

The Islamic State's radio hailed the attack and called Mateen "one of the soldiers of the caliphate in America." But it gave no indication the group planned or knew of the attack beforehand.

Counterterrorism experts have been warning in the past few years about the danger of so-called lone wolf attackers who act in sympathy with extremist groups like the Islamic State but are not directed by them.

Mateen's father, Seddique Mir Mateen, told reporters that the massacre was "the act of a terrorist," and added: "I apologize for what my son did. I am as sad and mad as you guys are."

He wouldn't go into details about any religious or political views his son held, saying he didn't know. Asked whether he missed his son, he said: "I don't miss anything about him. What he did was against humanity."at my son did. I am as sad and mad as you guys are."

He wouldn't go into details about any religious or political views his son held, saying he didn't know. Asked whether he missed his son, he said: "I don't miss anything about him. What he did was against humanity."

Thirty-nine of the dead were killed at the club, and the others died at hospitals, the mayor said. Authorities were still notifying victims' families Monday.

At least 53 people were hospitalized, including five in grave condition, meaning the death toll could rise.

The previous deadliest mass shooting in modern U.S. history was the 2007 attack at Virginia Tech, where a student killed 32 people and took his own life.

Mateen bought at least two guns legally within the last week or so, according to Trevor Velinor of the Bureau of Alcohol, Tobacco and Firearms.

Mateen exchanged gunfire with 14 police officers at the club and took hostages at one point. In addition to the assault rifle and handgun, he had a weapon in his vehicle, police said.

Police Chief John Mina said officers held back for some time because Mateen indicated he had a bomb vest. About 5 a.m., authorities sent in a SWAT team to rescue the remaining club-goers, Mina said.