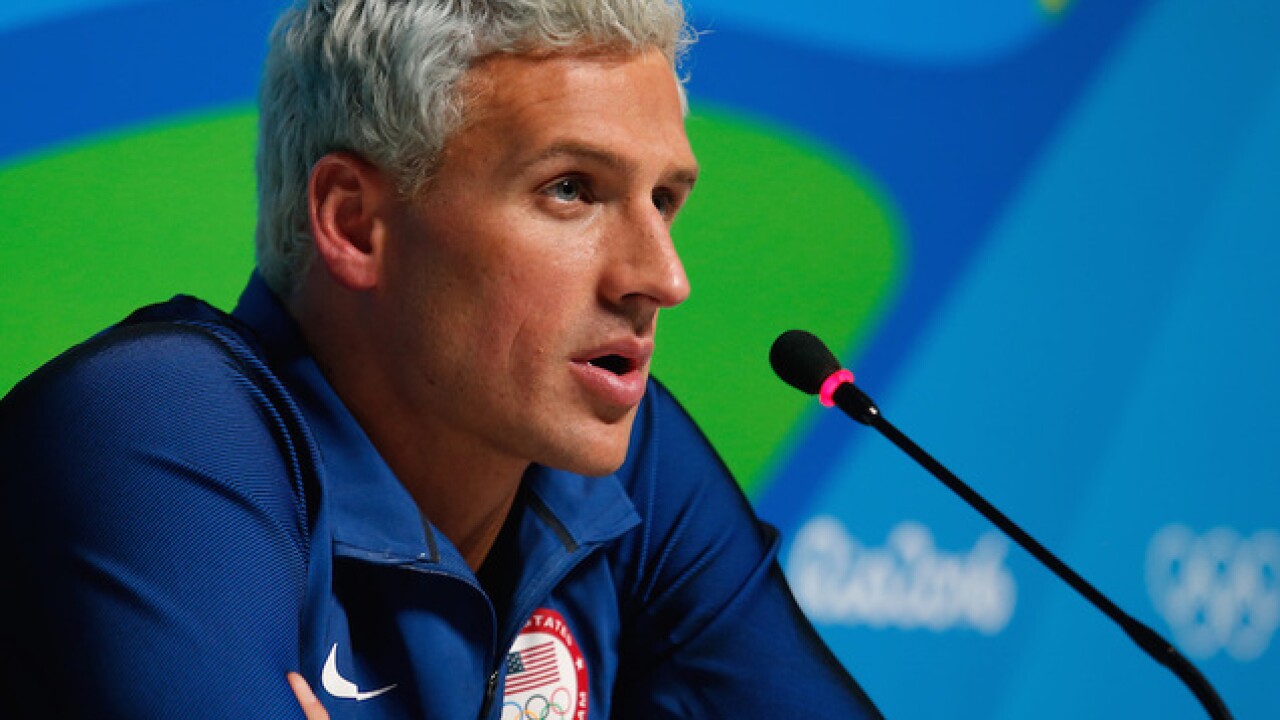 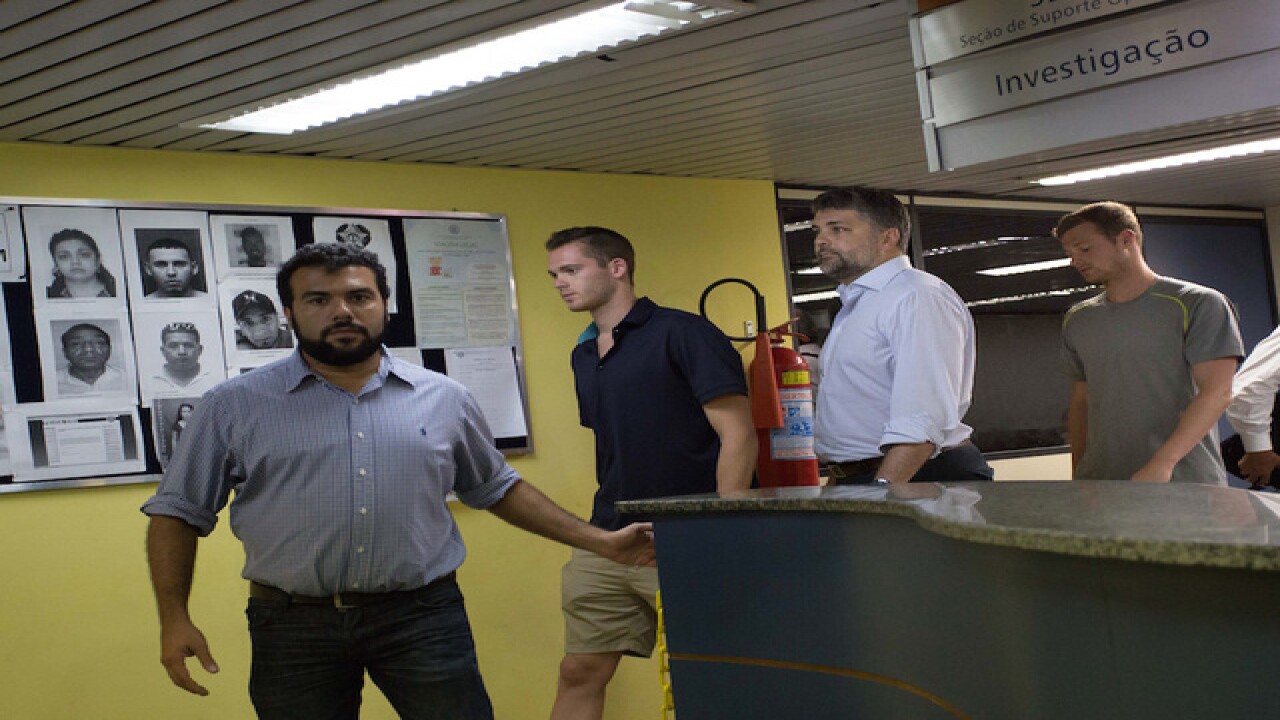 RIO DE JANEIRO (AP) — Brazilian police said Thursday that swimmer Ryan Lochte and three U.S. teammates were not robbed after a night of partying, and the intoxicated athletes instead vandalized a gas station bathroom and were questioned by armed guards before they paid for the damage and left.
The robbery that was or wasn't has become the biggest spectacle outside of the Olympic venues in Rio, casting a shadow over American athletes amid an otherwise remarkable run at the Summer Games. The ordeal was also a blow to Brazilians, who for months endured scrutiny about whether the city could keep athletes and tourists safe given its long history of violence.
RELATED: US swimmer to pay nearly $11K fine after Rio scandal
"No robbery was committed against these athletes. They were not victims of the crimes they claimed," Civil Police Chief Fernando Veloso said during a news conference.

The police account came in direct contrast to claims from Lochte's attorney earlier in the week. The attorney, Jeff Ostrow, had insisted the swimmer had nothing to gain by making the story up. He, as well as Lochte's father and agent, did not return phone calls seeking comment.
The swimmers could potentially face punishment — probation, suspension, a fine or expulsion — under USA Swimming's code of conduct. It was not clear if the swimmers would face criminal charges, though police said the athletes could be charged with destruction of property, falsely reporting a crime or both.
Two of the swimmers — Gunnar Bentz and Jack Conger — checked in to a flight out of Brazil late Thursday after a judge lifted the order seizing their passports and keeping them in the country. They had testified about the incident earlier in the day, and Brazilians chanted "liar" as they left the police building.
"They did not lie in their statements. They never lied to journalists. They only stayed quiet. They did not know what was going on," attorney Sergio Riera said.
The last swimmer in Rio, Jimmy Feigen, provided an updated statement to police, U.S. Olympic officials said, and hoped to get his passport back shortly to return home.
The saga began when Lochte claimed that he and his teammates were held at gunpoint and robbed several hours after the last Olympic swimming races ended. But police then said they didn't have evidence to substantiate the story. Their passports were ordered seized so the investigation could continue, but Lochte had already left the country.
While some details in the official account of the story changed on Thursday — police first said no guns were involved, then said two guards pointed weapons at the swimmers — security video confirmed the athletes vandalized parts of the gas station, leading to an encounter with station employees.
The closed-circuit video shows one of the swimmers pulling a sign off of a wall and dropping it onto the ground. A gas station worker arrives, and other workers inspect the damage. Veloso said the swimmers broke a door, a soap dispenser and a mirror.

The swimmers eventually talk with station workers as their cab leaves.
As they talk, two of the swimmers briefly raise their hands and all four sit down on a curb. After a few minutes, the swimmers stand up and appear to exchange something — perhaps cash, as police said — with one of the men.
The footage doesn't show a weapon, but a police official speaking on condition of anonymity because the investigation was ongoing said two guards pointed guns during the encounter. Veloso said the guards did not use excessive force and would have been justified in drawing their weapons because the athletes "were conducting themselves in a violent way."
A station employee called police, and the guards and employees tried to get the swimmers and the taxi driver to stay until authorities arrived, some even offering to help interpret between English and Portuguese, Veloso said. But he said the athletes wanted to leave, so paid 100 Brazilian reals (about US $33) and $20 in U.S. currency and left.
Conger and Bentz told authorities that the story of the robbery had been fabricated, said the police official who spoke to the AP about the guns.
Police said the swimmers were unable to provide key details in early interviews, saying they had been intoxicated. The police official said officers grew suspicious when security video showed the swimmers returning to the athletes village wearing watches, which would have likely been taken in a robbery.
"We got pulled over, in the taxi, and these guys came out with a badge, a police badge, no lights, no nothing just a police badge and they pulled us over," Lochte told NBC's "Today" the morning after the incident. "They pulled out their guns, they told the other swimmers to get down on the ground — they got down on the ground. I refused, I was like we didn't do anything wrong, so — I'm not getting down on the ground.
"And then the guy pulled out his gun, he cocked it, put it to my forehead and he said, 'Get down,' and I put my hands up, I was like 'whatever.' He took our money, he took my wallet — he left my cellphone, he left my credentials."
Lochte backed off some of those claims as the week went on, saying the taxi wasn't pulled over, and that the athletes were robbed after stopping at a gas station. Lochte also said a man pointed a gun toward him, but not at his head.
The swimmers did not call police, authorities said, and officers only began investigating after they saw news coverage with Lochte's mother speaking about the incident. Lochte also said the swimmers didn't initially tell U.S. Olympic officials what happened because "we were afraid we'd get in trouble."
While he's medaled often, Lochte's accomplishments have long been overshadowed by teammate Michael Phelps — the most decorated Olympian in history. Lochte, a 12-time medalist, won a gold in Rio in a relay race alongside Phelps.
The robbery debacle prompted both wild speculation and social media mockery, which quickly turned to scorn after the official account went public. #LochteGate trended on Twitter, with users sharing video footage and posting comments about white privilege and rude Americans. Memes mocking the Lochte lie proliferated almost immediately.
David Fleischer, a political scientist at the University of Brasilia, said the incident touched a nerve in Brazil because of the country's history and cases of people committing crimes while impersonating police.
"The story did have some sense of validity but it didn't bear out and it made them look bad worldwide," he said.
Copyright 2016 The Associated Press. All rights reserved. This material may not be published, broadcast, rewritten or redistributed.