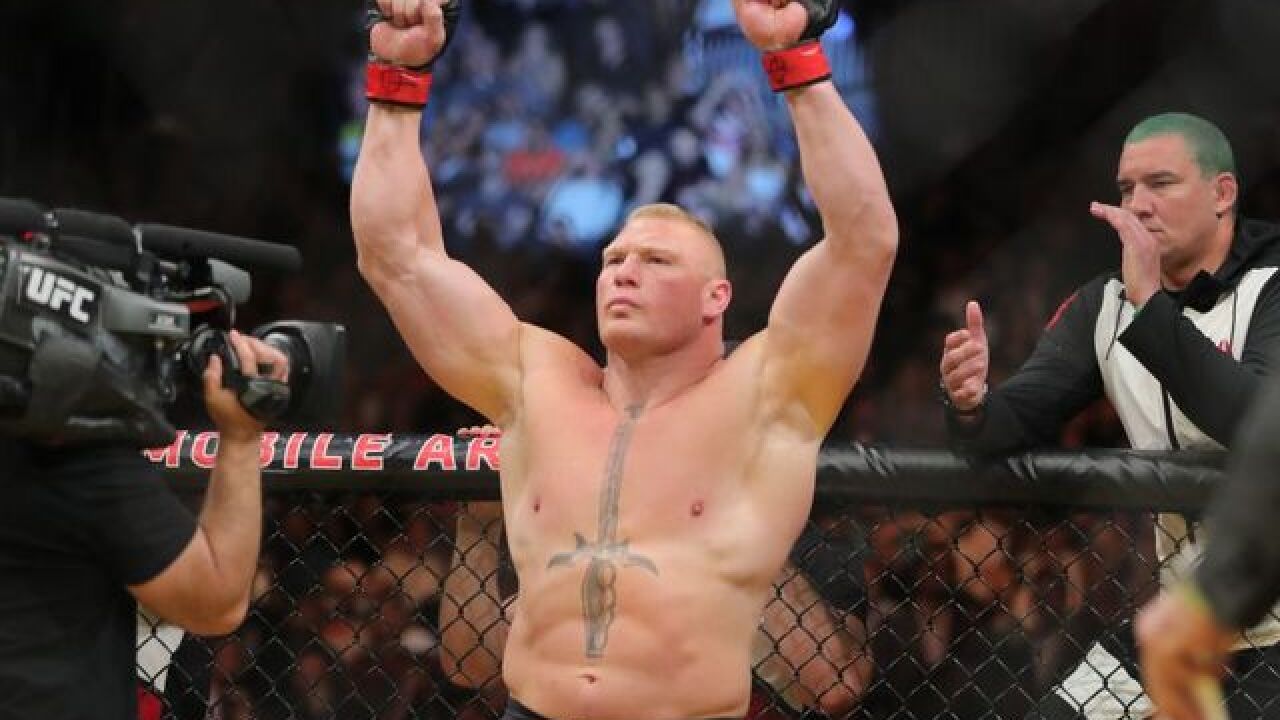 Former UFC heavyweight champion Brock Lesnar has been notified of a potential violation of the promotion's anti-doping policy from an out-of-competition drug test administered June 28.

Lesnar is among the most popular athletes in both mixed martial arts and professional wrestling. He beat Mark Hunt by decision at UFC 200 in Las Vegas last weekend, handily winning his first MMA fight in nearly five years.

"We will get to the bottom of this," Lesnar said Friday in a statement provided exclusively to The Associated Press.

The AP also obtained copies of three letters from the U.S. Anti-Doping Agency to Lesnar, informing the fighter that he had passed tests on three samples submitted over a nine-day period in mid-June, mere days before the sample with the potential violation was collected.

Lesnar, who turned 39 this week, has been rigorously drug-tested since announcing his return to UFC competition last month. USADA typically requires an athlete to submit to testing for four months before a UFC competition, but Lesnar was allowed to be tested in a shorter window because of the short time between his announced comeback in June and his return fight in early July.

USADA, which administers the UFC's doping policy, received Lesnar's test results Thursday evening from the WADA-accredited laboratory at UCLA. The test wasn't processed in time to potentially endanger his participation in UFC 200 on July 9.

Interim light heavyweight champion Jon Jones was pulled from the main event of UFC 200 three days before his bout when he also received notice of a potential anti-doping violation. Jones and his camp have denied the allegations and raised concerns about the possibility of a tainted nutritional supplement causing the failure.

USADA, the UFC and Lesnar all declined to specify the substance which raised concerns.

Lesnar is still under contract to the WWE, most recently appearing in its ring April 3, but was given permission to return to the UFC for one fight. He had been scheduled to perform again for the WWE at SummerSlam on Aug. 21, wrestling Randy Orton.

The WWE also issued a statement Friday night: "Brock Lesnar has not performed for WWE since WrestleMania and is not scheduled to return until Sunday, August 21."

The WWE also drug-tests its performers under a wellness policy. The company suspended star Joe Anoa'i, who performs under the name Roman Reigns, for 30 days last month for his first violation of the policy.

The UFC noted that Lesnar will have a legal review process before sanctions are imposed by the promotion or the Nevada Athletic Commission, which has jurisdiction because the out-of-competition test was performed close to UFC 200.

Lesnar made a UFC-record $2.5 million guaranteed purse for his first bout since late 2011, returning to the sport where set pay-per-view sales records while winning and losing the heavyweight title during a meteoric MMA career. He endured serious health problems before his hiatus from MMA, including a dangerous bout of diverticulitis.

Lesnar is a powerful, multitalented athlete who excelled in collegiate wrestling and tried out for the Minnesota Vikings before pursuing dual career in MMA and the WWE. After beating Hunt with his superior wrestling, Lesnar suggested he might be interested in another UFC fight.

When asked about performance-enhancing drugs in the weeks before his comeback fight, Lesnar memorably said: "I'm a white boy and I'm jacked. Deal with it."