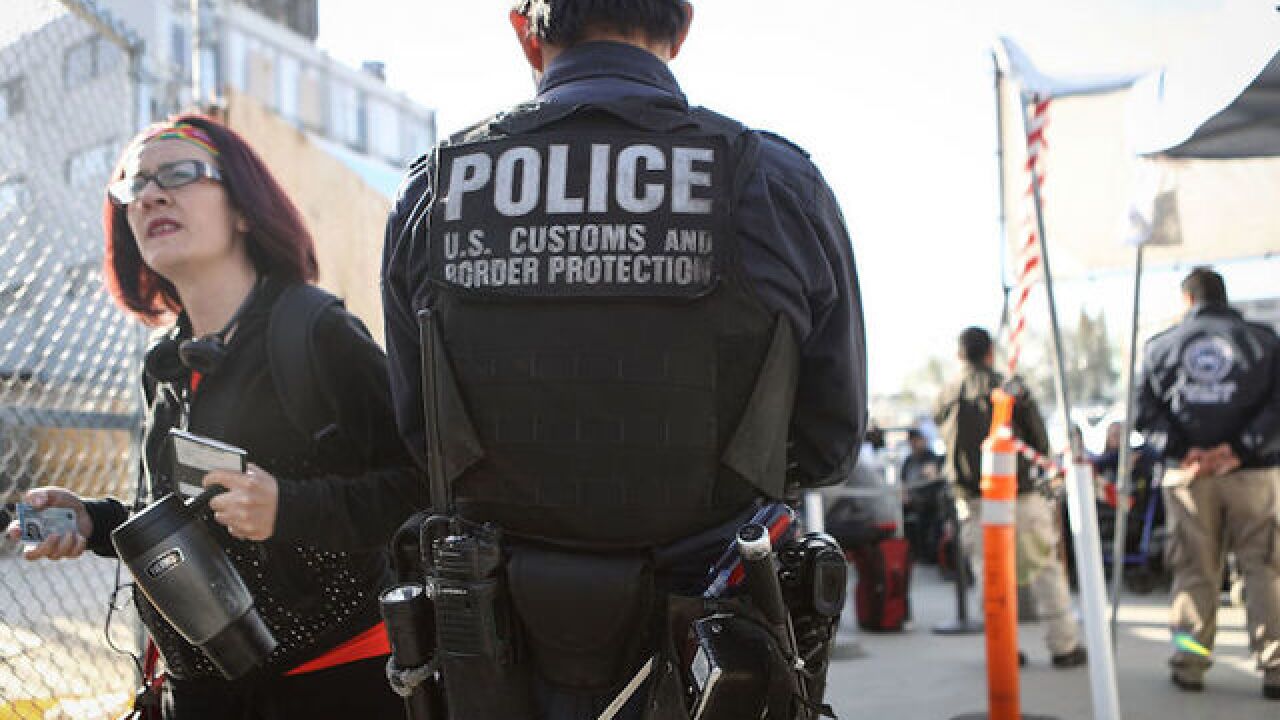 Copyright Getty Images
Mario Tama
<p>SAN YSIDRO, CA - APRIL 09: A U.S. Customs and Border Protection officer stands guard as pedestrians enter the United States at the San Ysidro port of entry on April 9, 2018 in San Ysidro, California. President Trump has issued a decree for the National Guard to guard the 3,200 kilometer border between the United States and Mexico. (Photo by Mario Tama/Getty Images)</p>

A bus company employee in Maine told a group of passengers they had to be US citizens in order to ride a bus after an officer from US Customs and Border Protection inquired about their citizenship.

The incident, which happened on Memorial Day in Bangor, was captured in cell phone video recorded by a Massachusetts man, Alec Larson. He was asked about his citizenship at the bus terminal as he and his girlfriend were boarding a Concord Coach Lines bus for the trip home to Boston.

They witnessed two Customs and Border Protection agents hanging out and smoking with two Concord employees. Larson said he and his girlfriend didn't think anything of it until each agent stood on each side of the bus' door.

That's when Larson decided to start recording because he had heard about similar situations happening in the past.

"I kind of anticipated why they were there. I didn't want to cause a scene, or stick the camera to anyone's face, just wanted to document what was going on," he told CNN. "The agents began to question people if they were US citizens. Many, including myself and my girlfriend, chose to decline to answer. The agent nodded and kept walking."

Then in the video Larson's girlfriend asks the bus employee, who helped load passengers' luggage, if someone had to be a US citizen to take the bus. The man replies, "yes."

The unidentified bus employee was mistaken when he said that, an executive with Concord Coach Lines said.

"He was asked a question that he's never been asked before and he misspoke," Benjamin Blunt, vice president of Concord Coach Lines, told CNN. "He feels badly about it." Blunt said the man, whom he declined to identify, was not disciplined by the bus company.

Border Patrol can ask you if you're a citizen of the United States, but, depending on the situation, you don't have to answer question,  according to the ACLU.

US actually has a 100-mile border zone

Many are surprised to see Border Patrol agents working so far from the US border with Canada or Mexico.

But Border Patrol agents work in a far wider geographic area. According to federal regulations, the agency's expanded search authority to conduct immigration checks extends anywhere within  a "reasonable distance" of 100 air miles  from US land borders and coastlines.

"Although most Border Patrol work is conducted in the immediate border area, agents have broad law enforcement authorities, including the authority to question individuals, make arrests, and take and consider evidence," Stephanie Malin, a spokeswoman for US Customs and Border Protection, told CNN. "Enforcement actions away from the border are within the jurisdiction of the U.S. Border Patrol and performed in direct support of immediate border enforcement efforts and as a means of preventing smuggling and criminal organizations from exploiting existing transportation hubs to travel to the interior of the United States."

Conducting immigration checks in the 100-mile zone isn't a new practice, and this isn't a new debate. But it's been getting more attention lately as the Trump administration ratchets up its crackdown on illegal immigration.

Two-thirds of the US lives inside this so-called 100-mile border zone, which includes several entire states, including Florida, Michigan, Maine and Hawaii, according to the American Civil Liberties Union.

Passenger: They were 'targeting brown-skin people'

Larson's video was widely circulated online thanks to  a Facebook post  from the ACLU of New Hampshire in which Gilles Bissonnette, the state group's legal director, blasts the agents' actions.

Larson said his girlfriend asked the bus employee if you had to be an American to ride the bus because the officer's questions angered her.

"My girlfriend was outraged. I could see a few people who were physically angry to see what was going on, mainly because we could tell that they were mainly targeting brown-skin people," he said.

"When I got in the bus, I noticed that the last person in the line had to pull out his identification. I am not sure how he answered the question about being a citizen but when he came back in the bus, I could see he was frustrated and overheard him saying that he felt fortunate he had all his paperwork with him."