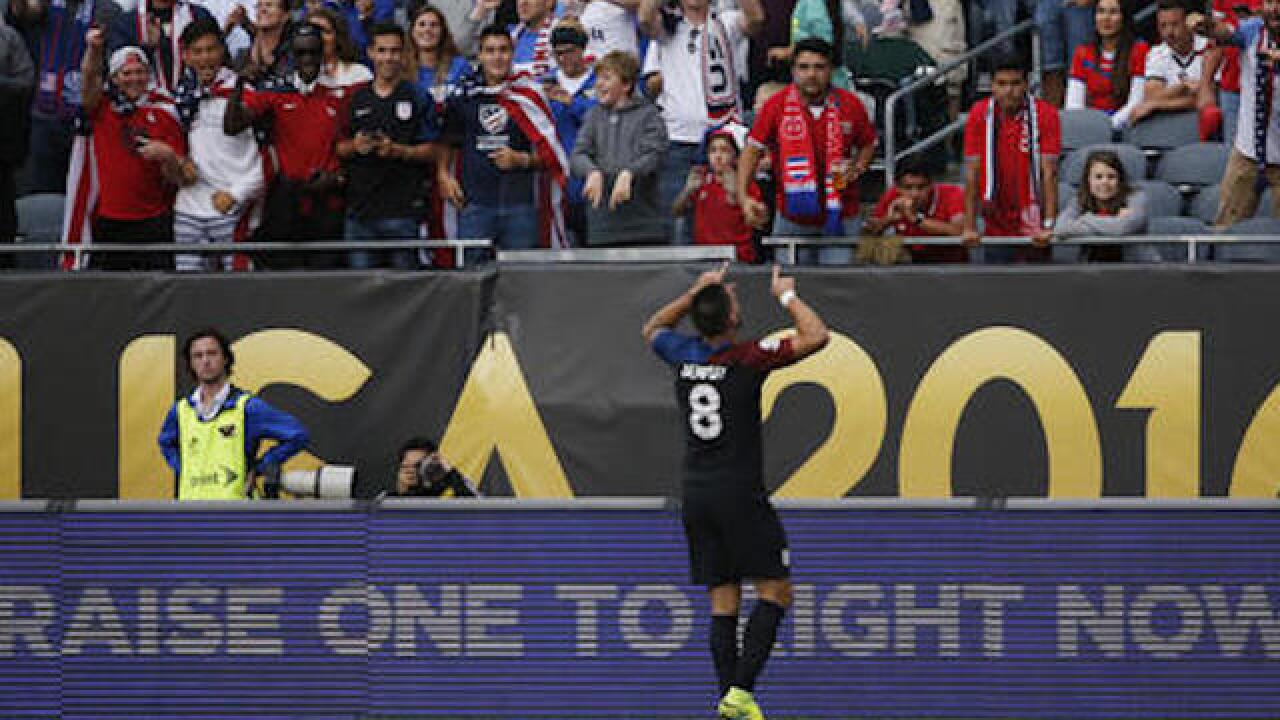 CHICAGO (AP) — Clint Dempsey had a goal and two assists, and the United States rebounded from its opening loss in Copa America with a convincing 4-0 victory over Costa Rica on Tuesday night.

Jermaine Jones, Bobby Wood and Graham Zusi also scored as the U.S. moved into prime position to grab one of two spots in the knockout round coming out of Group A in South America's championship. The Americans take on Paraguay in Philadelphia on Saturday night.

It was quite a response to days of questions after the U.S. allowed a goal off a corner kick and committed a costly hand ball in a 2-0 loss to Colombia on Friday night.

Costa Rica, which played a scoreless tie against Paraguay in its Copa opener on Saturday in Florida, looked sluggish for long stretches of the first half and was unable to recover. It played without key defender Kendall Waston after he got a red card in the previous game.

The loss to Colombia ramped up criticism of U.S. coach Jurgen Klinsmann, who said last month the Copa goal for the Americans was the semifinals.

U.S. Soccer Federation President Sunil Gulati told a group of reporters before the match that recent results for the men's team "haven't been what we would have hoped for, especially in the official competitions."

But Klinsmann and his players insisted they felt pretty good in the team's performance on Friday night in Northern California, and the coach doubled down on the positive vibe by sending out the same starters against defensive-minded Costa Rica. And it worked — in a big way.

Wood was pushed in the back by Cristian Gamboa when he attempted to go after a cross into the box, drawing a penalty kick despite a series of protests in front of referee Roddy Zambrano. Dempsey then drove it past Patrick Pemberton on the goaltender's left side for a 1-0 lead in the ninth minute.

It was Dempsey's 50th international goal. He also scored his first at the home of the NFL's Chicago Bears on May 28, 2005, against England.

The United States seemed to get stronger as the first half went along, and another flourish in the final minutes before halftime helped put it away.

Jones stole the ball at midfield and passed to Dempsey, who carried it deep into the Costa Rica side. The forward then nudged it back over to Jones, who shot it on the ground past a diving Pemberton in the 37th minute.

With Costa Rica looking a little ragged, the U.S. kept up the attack. Dempsey passed to Wood in the middle, and he turned away from defender Oscar Duarte before beating Pemberton on the ground for a 3-0 lead in the 42nd minute — delighting the crowd of 39,642 on a cool, cloudy night in Chicago.

U.S. goaltender Brad Guzan, playing near his hometown of Homer Glen, Illinois, clapped as he headed off the field after the halftime whistle, and Costa Rica barely challenged in the second half. Midfielder Bryan Ruiz sent a header off the left post in the 67th minute on the Ticos' best opportunity of the night.

Dempsey was saluted with a standing ovation when he was replaced by Chris Wondolowski in the 78th minute, and he applauded the crowd as he headed off the field. Zusi, who replaced Wood in the second half, completed the scoring with a drive and a shot in the 87th minute.