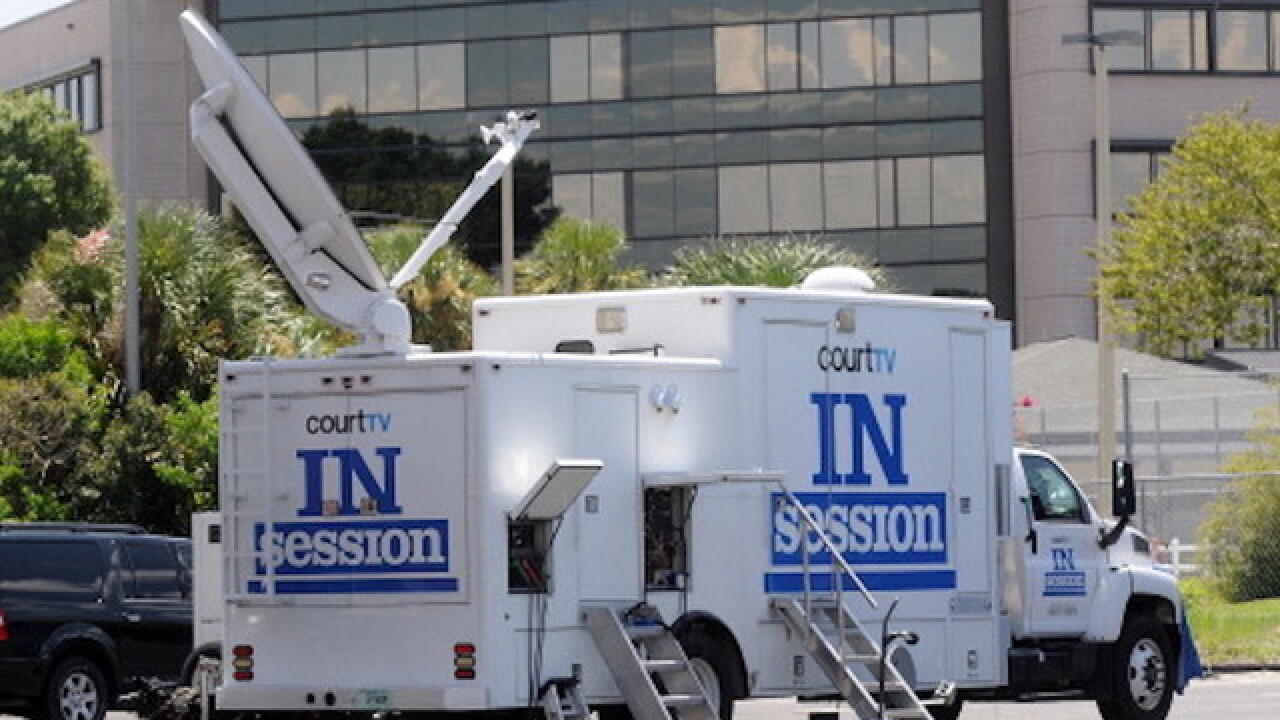 Image copyright 2018 Getty Images. All rights reserved. This material may not be published, broadcast, rewritten, or redistributed.
Gerardo Mora
<p>ORLANDO, FL - JULY 12: Court TV satellite truck parked in front of Florida's Orange County Corrections where Casey Anthony is being held on July 12, 2011 in Orlando, Florida.Anthony was acquitted of murder charges on July 5, 2011 but will serve four, one-year sentences on her conviction of lying to a law enforcement officer. She will be credited for the nearly three-years of time served and good behavior and will be released July 17. (Photo by Gerardo Mora/Getty Images)</p>

Note: The following is a press release from the E.W. Scripps Company, the parent company of this television station.

CINCINNATI – One of the most iconic brands in television history will return when Katz Networks, part of The E.W. Scripps Company, relaunches Court TV – a new network devoted to live, gavel-to-gavel coverage, in-depth legal reporting and expert analysis of the nation’s most important and compelling trials.

For more than 20 years, Court TV brought high-profile courtroom dramas, including the trials of O.J. Simpson, the Menendez brothers and Casey Anthony, into American living rooms. Continuing that legacy, the new Court TV network will launch in May 2019 and run 24 hours a day, seven days a week. It will be available for cable, satellite, over-the-air and over-the-top carriage.

“Court TV was a top-20 cable network and at the height of its popularity when the network was taken off the air in 2008,” said Jonathan Katz, president and CEO of Katz Networks. “Today, while consumer interest in the real-life drama of true-crime programming is at an all-time high, there is no dedicated daily court coverage on television. We expect the new Court TV to fill that void on cable, satellite, over-the-air and over-the-top.”

Programming and team
Like the original Court TV, the network will be devoted to around-the-clock coverage and analysis of the nation’s top trials. The acquisition of the Court TV assets includes footage of more than 1,000 trials, providing a wealth of content that will allow Court TV to enhance new courtroom coverage, revisit past trials and create original programming and specials.

Katz has made several key hires as it builds the network’s newsroom and studio in Atlanta:
Emmy Award-winning legal journalist Vinnie Politan will serve as the network’s lead anchor. Politan was a popular face on the original Court TV, leading the network’s coverage of the nation’s most compelling trials. A lawyer and former prosecutor, Politan has been covering the world of crime, trials and justice for more than 20 years, hosting legal and news programs on HLN, Sirius XM and, most recently, for the NBC affiliate in Atlanta.

John Alleva and Scott Tufts join as vice presidents and managing editors for Court TV. The two have a combined 40 years of experience producing trials for Court TV and CNN. Alleva was the lead producer for Court TV for more than 15 years and managed editorial content and field operations. Tufts spearheaded CNN’s coverage of the O.J. Simpson, Casey Anthony, Jodi Arias and George Zimmerman trials.

“Scripps and Katz look forward to reestablishing Court TV’s important legacy of providing Americans with transparency into the U.S. courts system and fulfilling our company mission of journalism and public service,” said Brian Lawlor, president of Local Media for Scripps. “We believe today’s TV audiences will be drawn to the network, leading to the same strong revenue growth and return on investment the other Katz networks have delivered.”

The Katz Networks are targeted, demo-specific brands leading a new generation of fast-growing broadcast networks created to serve cord-cutters, cord-nevers and subscription-video-on-demand (SVOD) subscribers. Bounce, seen in 91 percent of U.S. households and 97 percent of all target-market, African-American television homes, is the first and only African-American broadcast network and features a programming mix of original and off-network series, theatrical motion pictures, specials, live sports and more. Escape, currently in 93 percent of the U.S., reaches women 25-54 with a brand of programming anchored in stories of crime and mystery. Grit, available in 90 percent of U.S. households, targets men 25-54 with a lineup of western and action movies and series. Laff, covering 93 percent of the U.S., is the nation’s first over-the-air network devoted to comedy around-the-clock, and presents contemporary off-network sitcoms and popular movies geared toward an audience of adults 18-49. Brown Sugar is the popular new streaming service featuring the biggest collection of iconic African-American movies available. And “The List” is the nationally syndicated daily news magazine program featuring everything that’s trending in pop culture.