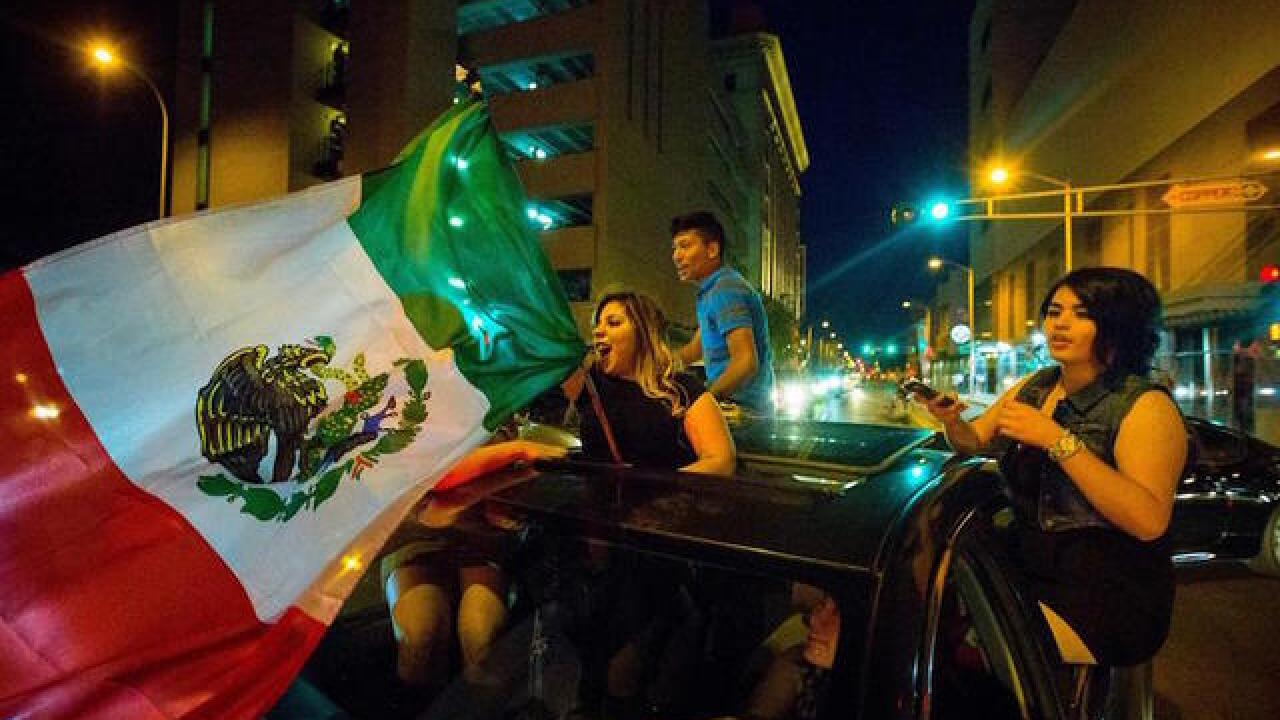 Yet far from the protests, an increasingly vocal Hispanic minority is speaking out in favor of the brash billionaire. They are backing Trump even in the face of resentment and suspicion from friends and family, who are among the overwhelming majority of non-white voters opposed to the New York businessman's candidacy.

"I'm not ashamed to vote for Trump. I'd just rather not have the conversation with my family," said Natalie Lally, a 22-year-old college student from New York City whose large extended family has Colombian roots.

She says silence fell over her grandmother's living room when she admitted her support for Trump during a recent family gathering that included more than 30 relatives.

"They just kind of seemed uneasy," she recalled. "And my uncle just said, 'Why?' "

In the border towns of Texas, the working-class neighborhoods of New York, and even inside Trump's overwhelmingly white rallies, the pro-Trump Hispanic minority is willing to risk public and private ridicule to defend the GOP's presumptive presidential nominee. So far, however, they're not getting much help from Trump's campaign, which has yet to launch an outreach effort to improve his standing with the growing voting bloc.

Approximately 23 percent of Hispanics said they'd vote for Trump in a May poll conducted by Fox News. Other recent polling places Trump far lower. The GOP's last presidential nominee, Mitt Romney, has cited his poor standing with Hispanic voters as one of his biggest regrets from the last election, when he earned 27 percent of the Hispanic vote.

Trump's team acknowledges the importance of the voting bloc, but says there has been little organized outreach so far.

"Any demographic that is growing at the rate of the Latino voters obviously will be of the utmost importance to a presidential campaign," Trump aide Ed Brookover said when asked about Hispanic outreach. "I know it's been talked about, but I think it's a touch early. I don't know of anything organized."

Trump's team expects to work closely with the Republican National Committee, however, which has had paid Hispanic outreach staff on the ground in nine states.

Trump supporters are eager to help.

Carlos Guerra, a 24-year-old son of Mexican immigrants who lives along the border in Laredo, Texas, says he wants to do more than wear Trump's "Make American Great Again" hat around town.

"Our town is sick of the violence from Mexico," he said, applauding Trump's plan to build a massive wall on the border. "People are dying every day."

Some of his family members also support Trump, but "they're not as loud about it," he said.

"I have talked to a lot of people and of course they criticize me," Guerra added. "They ask, 'Do you hate your race?' I feel discriminated against, honestly."

Trump's policies and tone on immigration have sparked passionate — and sometimes violent — reactions from minority voters.

His vow to complete a massive wall along the Mexican border is a pillar of his agenda. He has also promised to impose a temporary ban on Muslims entering the U.S., embraced plans to deport more than 11 million immigrants in the country illegally and described Mexico sending rapists and criminals across the border in his announcement speech.

He lashed out at protesters who clashed with police outside his Tuesday rally in Albuquerque, New Mexico. The protesters, including many Hispanics, waved Mexican flags while others hurled rocks at police.

"The protesters in New Mexico were thugs who were flying the Mexican flag," Trump wrote on Twitter. "The rally inside was big and beautiful, but outside, criminals!"

During a Wednesday appearance in Anaheim, he claimed "a great relationship with the Hispanics."

"The Mexican people are great. They're going to vote for me like crazy," he said.

Outside the Anaheim event, a small group of protesters pummeled and decapitated a Trump piñata as police arrested more protesters.

Conversations with Trump Hispanic supporters across the country in recent months show many feel especially frustrated with immigrants in the country illegally. Many waited years for work authorization or citizenship or have relatives who did.

And while some embrace Trump's plans for the wall and deportations, others say they don't believe Trump actually plans to follow through with his proclamations on the campaign trail.

Yet there are often a handful of Hispanic supporters inside his rallies. Before Trump took the stage in Albuquerque, Mary Jo Andrade, 37, a licensed mental health counselor, said her 17-year-old daughter is often teased in school for backing him.

"She hears, 'Oh, you're not real Mexican. You're not true Mexican,' " Andrade said and added, "A lot of the time I tell her, 'Keep your silence because of that.' "