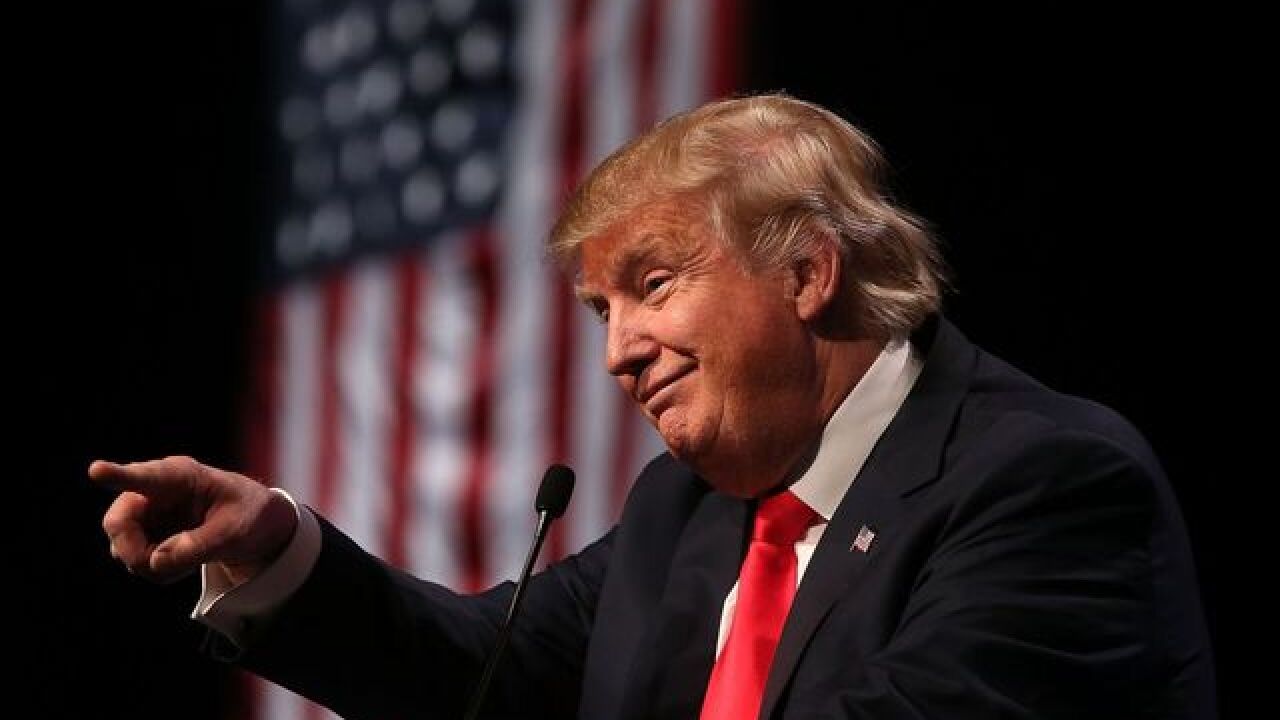 ANAHEIM, Calif. (AP) — A day after violent protesters outside a Donald Trump rally threw burning items at police and toppled barricades, the presumptive Republican presidential nominee railed against "Crooked Hillary" Clinton and leaders in his own party who haven't yet endorsed him in a boisterous but less heated rally Wednesday.

Outside, demonstrators quietly held up signs reading 'Love and Peace" and "Migration is beautiful" during the rally, but the modest crowd grew rowdier when Trump supporters came outside. The two sides shouted at each other as dozens of police, some on horseback, moved in to prevent a renewal of the violence that included rock-throwing and burning T-shirts Tuesday night in New Mexico.

Five people were arrested as a line of police slowly moved scattered protesters along a nearby street.

Inside, Trump's rally was interrupted several times by protesters who were escorted out of the Anaheim Convention Center, which was packed with thousands of Trump supporters.

"Get 'em out!" he shouted at one point. "Out! Out! Out!" But Trump urged his supporters and security to handle his interrupters gently. "Don't hurt 'em," he told them. "I say that for the television cameras. Do not hurt him even though he's a bad person."

Later, a pair of protesters in the stands behind the candidate ripped a Trump sign in half and made a rude gesture toward the crowd.

As for Clinton, Trump noted Wednesday's report by the State Department inspector general that faulted her for her use of private email for official business when she was secretary of state.

"She had a little bad news today, as you know. Some reports came down, weren't so good," Trump said. "The inspector general's report — not good."

Trump said he was eager to run against Clinton, but wondered aloud, as he often does, whether she would actually be the Democratic Party's nominee.

"It could be we're going to run against Crazy Bernie," he said. "He's a crazy man, but that's OK. We like crazy people."

Trump appeared to be making a concerted effort Wednesday to tout his support with women. He met with a group of female business leaders ahead of the rally and invited several onstage. "I'm telling you, women do like me," he said.

But later he went after Massachusetts Sen. Elizabeth Warren, who has been vigorously criticizing him.

"She gets nothing done, nothing passed. She's got a big mouth, and that's about it," he said of Warren. "But they use her because Hillary's trying to be very presidential. She's stopping with the shouting, OK?"

"I'll be honest with you, I cannot listen to her," he added of Clinton.

Trump's western swing comes as he works to unify a Republican Party that often remains skeptical of his candidacy. During the rally, Trump offered jabs at 2012 nominee Mitt Romney and former rival Jeb Bush, who have yet to endorse his candidacy.

House Speaker Paul Ryan is still holding out on endorsing Trump even as his staff and other House Republicans and aides communicate more closely with the Trump campaign on policy.

Meeting with reporters Wednesday, Ryan shot down rumors that an endorsement was imminent. "I don't have a timeline in my mind and I have not made a decision and nothing's changed from that perspective," he said.

Later in the day his staff disclosed that Ryan planned to speak with Trump Wednesday evening by phone but insisted it was not about endorsing. "The purpose of the call tonight is for the two of them to continue their conversation about unifying the party," said spokesman Zack Roday.

Before the Anaheim rally, police issued a firm warning to protesters that violence would not be tolerated following the clashes between anti-Trump protesters and police in New Mexico a day earlier.

In one of the presidential campaign year's more unruly spectacles, anti-Trump protesters had thrown burning T-shirts, plastic bottles and other items at police officers, injuring several, and had toppled trash cans and barricades.

Police responded by firing pepper spray and smoke grenades into the crowd outside the Albuquerque Convention Center.

In Anaheim, pro- and anti-Trump demonstrators clashed last month at Anaheim City Hall when the City Council discussed a resolution criticizing Trump as divisive. Rally attendees arrived early Wednesday, weaving through a maze of police barricades and security checkpoints before entering the venue.

The violence in New Mexico has prompted security concerns beyond California. Police in Bismarck, North Dakota, said Wednesday they would dedicate about a quarter of their force for security when Trump heads to the state Thursday.

Sgt. Mark Buschena said about 30 officers would be assigned to the event at the Bismarck Civic Center. Trump is keynoting the Williston Basin Petroleum Conference and Expo, with about 7,000 people expected to attend.

Trump was also scheduled to attend a TV taping and a fundraiser in the Los Angeles area Wednesday evening. He'll be back in California on Friday with visits to Fresno and San Diego.