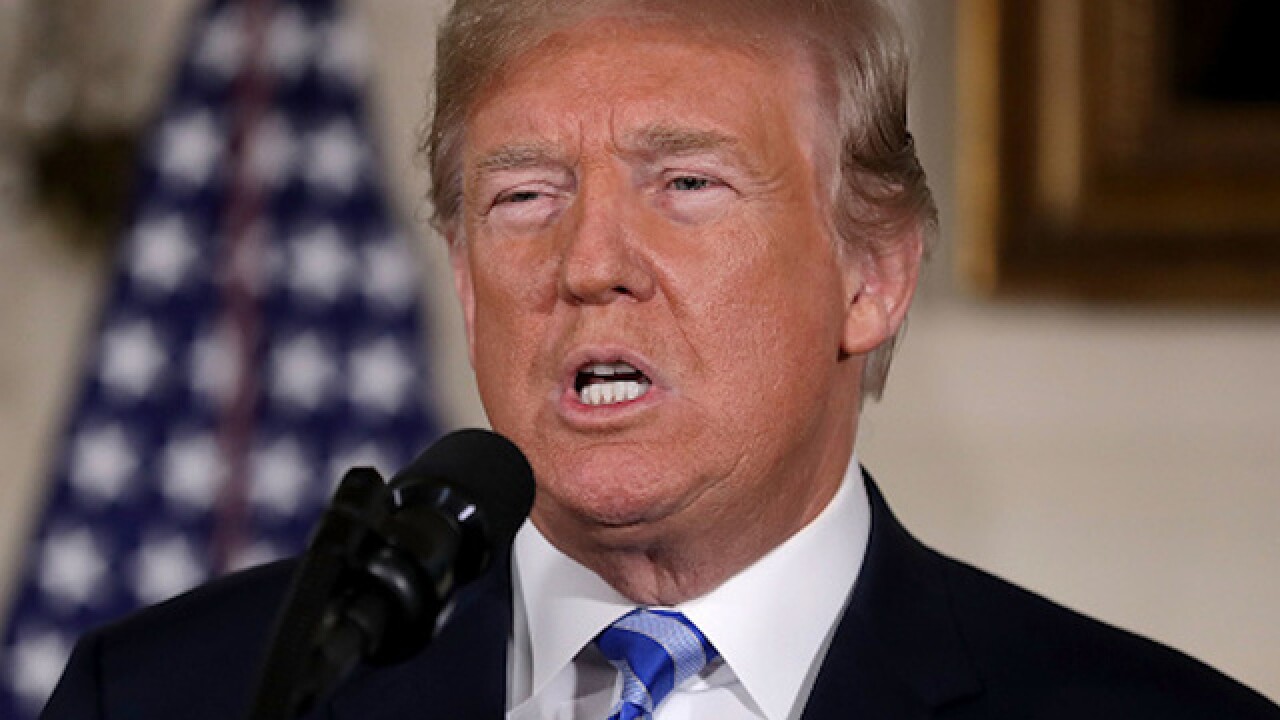 Image copyright 2018 Getty Images. All rights reserved. This material may not be published, broadcast, rewritten, or redistributed.
Chip Somodevilla
<p>WASHINGTON, DC - MAY 08: U.S. President Donald Trump announces his decision to withdraw the United States from the 2015 Iran nuclear deal in the Diplomatic Room at the White House May 8, 2018 in Washington, DC. After two and a half years of negotiations, Iran agreed in 2015 to end its nuclear program in exchange for Western countries, including the United States, lifting decades of economic sanctions. Since then international inspectors have not found any violations of the terms by Iran. (Photo by Chip Somodevilla/Getty Images)</p>

Between 9:04 am and 9:37 am, Trump sent five tweets -- all around the same basic theme: He is being unfairly persecuted by special counsel Robert Mueller even as Mueller and the broader FBI overlook crimes by Democrats.

The tweets included misinformation and, in some cases, outright falsehoods. Taken together, Trump said 11 things that aren't true. Here's the breakdown -- tweet by tweet.

1. "Things are really getting ridiculous. The Failing and Crooked (but not as Crooked as Hillary Clinton) @nytimes has done a long & boring story indicating that the World's most expensive Witch Hunt has found nothing on Russia & me so now they are looking at the rest of the World!" ( 9:04 am )

Trump is referring here to an  article in the Times  published Saturday detailing a 2016 meeting between Donald Trump Jr. and a liaison for two Arab princes in which the emissary made clear that his clients wanted to assist Trump's campaign.

He is also making a tangential reference to a  detailed piece published in the Times earlier this week  that detailed the origins of the FBI investigation into Russia interference in the 2016 election and possible collusion between his campaign and the Russians.

Trump is hanging his conclusion on this one sentence: "A year and a half later, no public evidence has surfaced connecting Mr. Trump's advisers to the hacking or linking Mr. Trump himself to the Russian government's disruptive efforts."

What that sentences makes clear is a) no public evidence yet exists and b) the investigation is ongoing.

2. "....At what point does this soon to be $20,000,000 Witch Hunt, composed of 13 Angry and Heavily Conflicted Democrats and two people who have worked for Obama for 8 years, STOP! They have found no Collussion with Russia, No Obstruction, but they aren't looking at the corruption..."

There's zero factual basis -- at least that CNN reporters could find -- for Trump putting a $20 million price tag on the Mueller probe. The closest CNN has come to a fact-based cost for the Mueller probe is back in December, when the  investigation's total cost was $6.7 million.

Trump's claim that there are 13 Democrats on Mueller's team is also false. According to  The Washington Post's Fact Checker , five of the 16 known members of Mueller's team donated to Hillary Clinton's 2016 campaign.

The  New York Times  says that nine of the 17 known lawyers on Mueller's team have donated to Democratic campaigns in the past.  Then there's this from the Post's Philip Bump : "Of the 18 attorneys we identified on Mueller's team, half gave no money to anyone, according to our analysis. Another five gave $1,000 or less. The one who gave the most also gave to two Republicans."

It's not entirely clear who Trump is referring to with the line "two people who have worked for Obama for 8 years" but, presumably, one of them is Mueller himself. Mueller was appointed FBI director by President George W. Bush, a Republican. President Obama simply kept Mueller on for the length of his 10-year term.

Trump says that Mueller's team has found no collusion, but that too is not fully accurate. The investigation is ongoing and all of Mueller's findings have yet to go public.

First, a truth:  Clinton did delete 33,000 emails  after she and her attorneys determined they were entirely private and personal communications with no ties to her work as Secretary of State.

Now, to the untruths.

The $145 million figure Trump is referring to is the total donations to the Clinton Foundation by nine individuals who also at one time or another had investments in a Russian company that Clinton's State Department allowed to buy a majority stake in Uranium One, a Canada-based company with US mining interests. The problems with Trump's claim,  as detailed here by PolitiFact , are considerable and include the fact that the donations to the Clinton Foundation were made prior to the idea of Clinton serving as secretary of State and that State was one of nine agencies who okayed the deal.

Trump's insistence that someone in the Clinton campaign paid then-FBI Deputy Director Andrew McCabe's wife $700,000 as a payoff to drop any investigations into them is a untrue. McCabe's wife ran for the state Senate in Virginia in 2015. A super PAC affiliated with Virginia Gov. Terry McAuliffe, a longtime Clinton ally, donated $500,000 to her campaign. She lost.

There is zero evidence that Hillary Clinton was involved in the donation in any way, shape or form, or that McAuliffe made the donation to dissuade Andrew McCabe from looking into alleged wrongdoing by the Clintons.

4. "Now that the Witch Hunt has given up on Russia and is looking at the rest of the World, they should easily be able to take it into the Mid-Term Elections where they can put some hurt on the Republican Party. Don't worry about Dems FISA Abuse, missing Emails or Fraudulent Dossier!"

The Mueller probe has not "given up" on Russia. Five people in the Trump campaign orbit have already pleaded guilty to crimes unearthed by Mueller and several -- including former national security adviser Michael Flynn and former deputy campaign chairman Rick Gates -- are cooperating with the Mueller probe.

It's less clear what Trump is referring to with the phrase "Dems FISA abuse" although he has repeatedly suggested that Obama ordered a wiretap on him at Trump Tower during the campaign, and that the FBI placed an informant in his campaign as spy.

As for the missing emails, it is not clear what crime Trump is alleging, although there is little doubt Clinton would have been better served to have a neutral third party go through her emails to determine which were personal and could be deleted and which were not.

Trump's claim that the so-called "Steele dossier" is "fraudulent" is also not accurate. The more salacious elements of the dossier, gathered by former British spy Christopher Steele, are unconfirmed by the FBI. But the intelligence community has made clear that portions of the dossier are borne out by their own investigation.

5. "What ever happened to the Server, at the center of so much Corruption, that the Democratic National Committee REFUSED to hand over to the hard charging (except in the case of Democrats) FBI? They broke into homes & offices early in the morning, but were afraid to take the Server?"

This one is, mostly, accurate. The  FBI confirmed that the DNC repeatedly rejected their requests  to turn over the email server that had been penetrated by someone allegedly affiliated with the Russians.

Trump's reference to the raids conducted by the FBI on the homes and offices of people like former campaign chairman Paul Manafort and Trump personal attorney Michael Cohen misses the mark, however. Federal law enforcement did not break into these homes. They conducted raids based on search warrants -- and entirely legal process based on, among other things, probable cause.