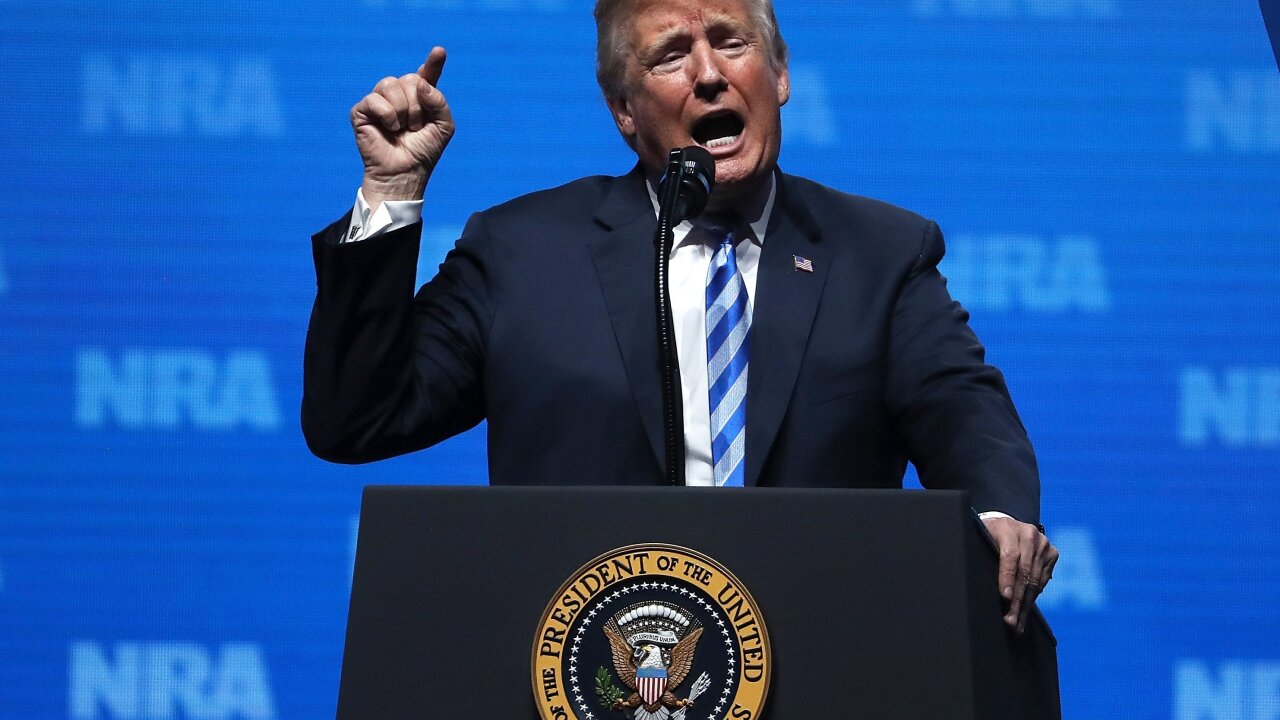 President Donald Trump on Friday made a campaign-style speech to one of his most loyal political constituencies -- gun rights activists -- as he delivered his fifth consecutive speech to the National Rifle Association's annual meeting .

In dramatic fashion, Trump announced that he would not ratify a United Nations arms trading treaty and then signed a message to the Senate in front of an audience of NRA leaders.

"The United Nations will soon receive a formal notice that the United States is rejecting this treaty," the President said.

"As part of this decision, I will sign right now in front of a lot of witnesses, a lot, a message asking the senate to discontinue the ratification process and to return the now rejected treaty right back to me in the Oval Office where I will dispose of it," Trump said.

Trump then pulled out a pen and signed the document as the crowd cheered. After showing the audience, he said they all "want the pen." The President then threw the "famous pen" to a member of the audience.

"You see what's going on. 'Let the Boston bomber vote.' He should be voting, right? I don't think so," the President said at the meeting. "'Let terrorists that are in prison vote.' I don't think so. Can you believe it? That this where some of these people are coming from? And they're the most popular ones."

Sanders had said during a CNN town hall earlier this week that felons should be allowed to vote, even if they're still incarcerated.

Trump has maintained a close relationship with the gun lobby and its activists throughout his presidency after the group spent more than $30 million to help elect him in the 2016 presidential election, rejecting a push to reform the nation's gun laws in the wake of several mass shootings in 2018. With 2020 on the horizon, Trump will once again be looking to the group to help galvanize gun rights supporters and bolster his reelection campaign.

But while the President will surely tout his administration's efforts to maintain the status quo on gun rights, his speech also comes as he fumes about Democrats' attempts to build a case that he obstructed justice based on special counsel Robert Mueller's report .

A crowd of some of his most loyal supporters often drives the President to deliver a speech full of red meat and attacks on his political opponents.

Speaking last year during the 2018 midterm campaign , the President delivered a speech reminiscent of his campaign rallies that touched on a range of base-pleasing topics and included an airing of grievances relating to the special counsel's investigation.

As he left the White House for the NRA's meeting in Indianapolis, the President continued to rail against Mueller's investigation and defend his actions.

Just as he denied ever directing his White House counsel Don McGahn to fire Mueller -- as McGahn and others testified -- the President also maintained his right to do so.

"We had the absolute right," Trump said.

He decried the special counsel as a "Trump hater" and turned once again to his favorite term, decrying Democrats' inquiries following Mueller's report as a "witch hunt."

"We have to run a country," Trump said. "This is a pure political witch hunt."