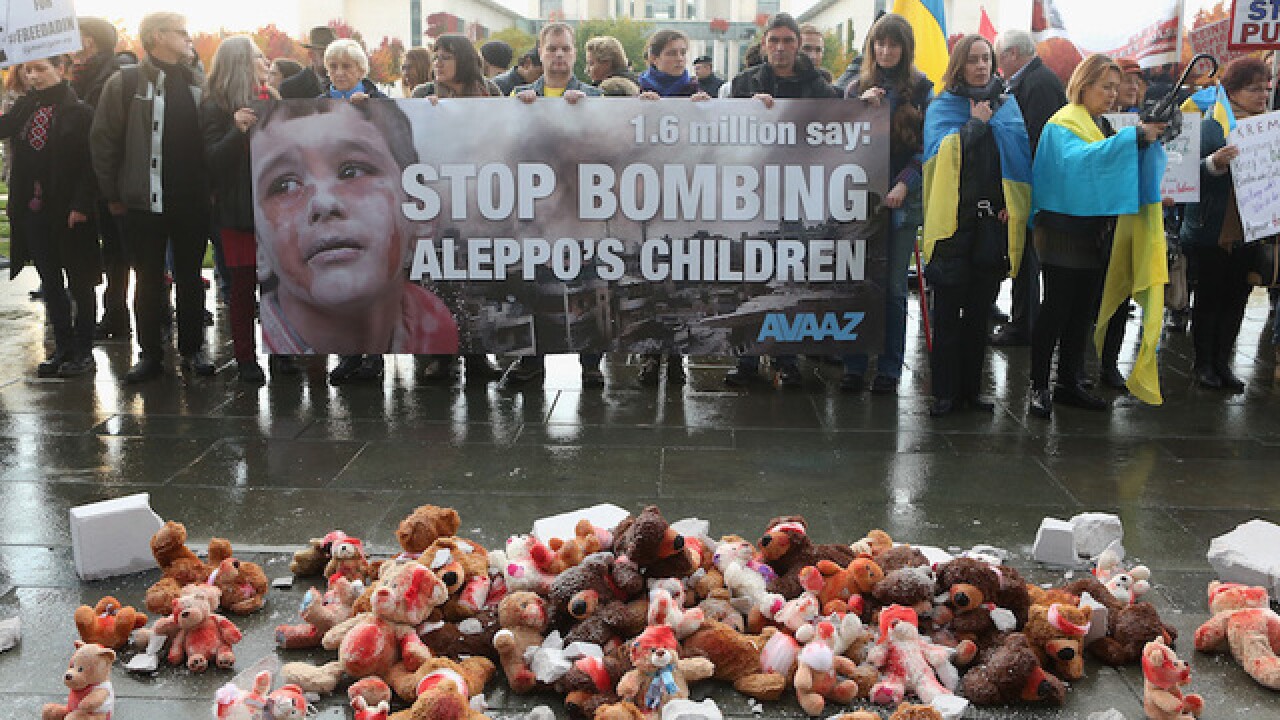 Copyright Getty Images
Adam Berry
<p>BERLIN, GERMANY - OCTOBER 19: Bloodied teddy bears are seen during a demonstration against Russian military operations in Syria during a visit by Russian President Vladimir Putin to the German federal Chancellery on October 19, 2016 in Berlin, Germany. The leaders of Russia, Ukraine, France and Germany, known as the Normandy Four, met in Berlin to discuss implementation of the peace plan known as the Minsk Protocol, a roadmap for resolving the conflict in Ukraine after Russian forces invaded in 2014 and annexed the peninsula of Crimea. (Photo by Adam Berry/Getty Images)</p>

Dozens of people, including at least ten children, have been killed and over 200 injured as a result of asphyxiation caused by exposure to an unknown gas or chemical agent in northern Syria on Tuesday, multiple activist groups were reporting.

Airstrikes hit the city of Khan Sheikhoun, in Idlib province, at 6.30 a.m. giving off a "poisonous gas," according to Anas al-Diab, an activist with the Aleppo Media Center.

Videos circulating on social media purporting to be from the scene show people, including children, who appear unresponsive; others are seen struggling to breathe or wearing oxygen masks.

Doctors are attempting to evacuate the wounded to Turkey, according to activists.

Activist al-Diab said the death toll was at least 67, while activist group Idlib Media Center reported that dozens were killed. Elsewhere the UK-based Syrian Observatory for Human Rights said at least 58 were dead, including ten children.

The High Negotiations Committee, an umbrella opposition group, claimed the death toll could be as high as 100 with up to 400 injured. Activist groups have blamed Syrian President Bashar al-Assad's regime for the attack.

The Syrian Coalition, another umbrella opposition group, referred to the attack in a Twitter post as a "crime similar to that in Eastern Ghouta in 2013 that the international community allowed to pass without accountability or punishment."

The tweet was referring to a notorious and widely reported chemical attack that was blamed on the Syrian regime.