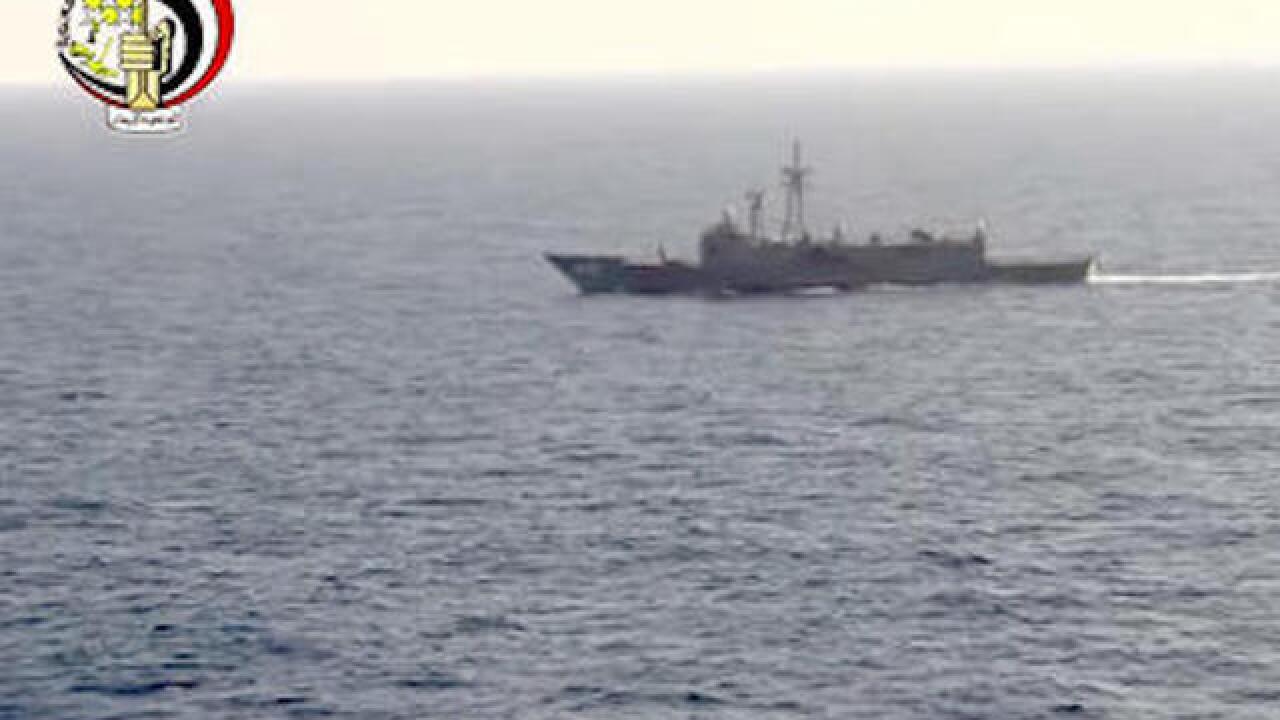 CAIRO (AP) — A French vessel that joined the search for the EgyptAir plane which crashed last week killing all 66 people on board arrived Friday in the crash area, as Egyptian officials said search teams in the Mediterranean have picked up a beacon believed to be from the doomed aircraft.

According to Egyptian security officials, the French ship is carrying equipment that can find flight data and cockpit voice recorders — the so-called "black boxes." French officials could not be immediately reached to confirm the ship's whereabouts.

Meanwhile, the chief investigator in Egypt said search teams in the Mediterranean have picked up a beacon believed to be from the EgyptAir Flight 804. Locating a beacon has narrowed the search to a 5 kilometer (3 mile) radius, said Ayman al-Moqadem, stressing that this doesn't mean the black boxes have been found, which he said requires highly sophisticated technology.

The signal that was picked up came from one of the devices on the plane transmitting its location, said al-Moqadem, who spoke to reporters on Thursday.

Eight days after the plane crashed off Egypt's northern coast on a Paris to Cairo flight, the cause of the tragedy still has not been determined. Ships and planes from Egypt, Greece, France, the United States and other nations have been searching the Mediterranean north of the Egyptian port of Alexandria for the jet's voice and flight data recorders, as well as more bodies and parts of the aircraft.

Small pieces of the wreckage and human remains have already been recovered while the bulk of the plane and the bodies of the passengers are believed to be deep under the sea. A Cairo forensic team has received the human remains and is carrying DNA tests to identify the victims.

Egypt's civil aviation minister Sherif Fathi has said he believes terrorism is a more likely explanation than equipment failure or some other catastrophic event. But no hard evidence has emerged on the cause, and no militant group has claimed to have downed the jet. Earlier, leaked flight data indicated a sensor detected smoke in a lavatory and a fault in two of the plane's cockpit windows in the final moments of the flight.

The French air accident investigation agency, the BEA, said in a statement that the Laplace ship left Thursday from Corsica for the zone of the crash, with two BEA investigators aboard. The Laplace is equipped with three detectors made by the Alseamar company designed to detect and localize signals from the flight recorders, believed about 3,000 meters (3,280 yards) underwater.

France may also send an unmanned submarine and deep-sea retrieval equipment, the statement said. The BEA is involved in the search because the crashed plane was an Airbus, manufactured in France.

Because of the difficulties in finding the black boxes, Egypt has contracted two foreign companies to help locate the flight data recorders of the plane.

One of the companies is Alseamar, which has equipment aboard the French vessel. Egyptian official have said the second company is called Deep Ocean Search. Also, Egyptian President Abdel-Fattah el-Sissi said earlier that a submarine would join the search for the plane's data recorders.

However, al-Moqadem told reporters that the submarine is not equipped to detect signals from the black boxes.

All Egyptian officials spoke on condition of anonymity because they were not authorized to release the information.